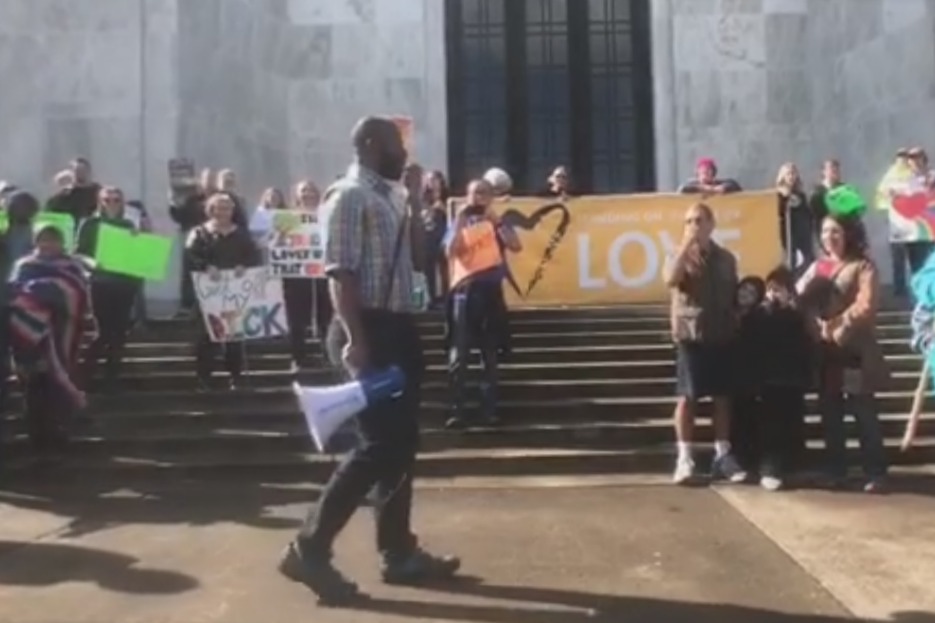 Whitten, the 25-year-old executive director of the nonprofit Know Your City – which provides educational and arts programs to youth and adults in Portland – attended the rally on March 25 because, he explained in a Facebook post about the encounter, “I personally believe there is value in talking to everyone. Even people you disagree with.”

Whitten had hoped to engage in civil discourse on the Salem Capitol grounds, but was instead surrounded by several masked members of a patriot movement group. One of the men loudly and aggressively threatened Whitten’s physical safety, while accusing him of being a child molester.

“I made the grave mistake of thinking that I could stand peacefully at the March4Trump rally without becoming a target of threats and hostility,” wrote Whitten in a letter addressed to Salem Mayor Chuck Bennett and Salem City Council. “Because I am a Black man, a White Trump supporter saw me and loudly accused me of being a child sex predator, because they thought I looked like a different Black man who has been accused of such crimes in the media.”

At about 19 minutes into Whitten’s livestreamed Facebook video, an unidentified man – masking his face with a yellow scarf and sunglasses – threateningly tells Whitten, “I know you’re the sex offender.”

Whitten is heard defending himself repeatedly, asking his accuser to say his name as the masked man, backed by a circle of cohorts, becomes increasing hostile. The man asserts a string of profanities and demands, “Get back on your side, you rapist son of a bitch,” mere inches from Whitten’s face.

Whitten then asks a nearby photographer to alert police of his threatened safety. In the video, which has over 13,000 views, the officer is seen doing little to address the threats and instead asks Whitten to leave the area.

Meanwhile, behind the officer, a female Trump supporter – identified as Angela Roman, a policy analyst for State Representative Mike Nearman – yells at Whitten, “you have mental f---ing illness” because he and fellow protestors “get off on ruining peoples’ freedom to assemble.”

“I told (the officer) that I had done nothing wrong and that he could choose to protect me from being killed if he’d like to,” Whitten continued in his letter. “The police officer almost immediately decided that my concerns were not significant, and left so that this physically aggressive male could continue to harass and push me.”

The masked men are members of the Oregon Three Percenters, a patriot movement group known for its decentralized militia tactics. The group organized at the pro-Trump rally to provide “security” at the instruction of its leadership.

A half hour after leaving the area, Whitten attempted to return to the pro-Trump rally, but was told by a police offer that he was not allowed to enter the group again, “since ‘I was causing problems,’ when in fact, the only problem I caused was being Black in the wrong area,” he wrote.

Whitten is asking local government to view his livestream footage to ascertain that he was not conducting himself in a disrespectful or disruptive manner; and that the Salem police ignored his concerns for safety and did not wear any visible identification, making it impossible for Whitten to direct these concerns to any individual.

Several altercations broke out at the Trump rally, including the burning of an American flag by a black-clad counter protestor. While police established barricades, a deluge of insults and arguments between supporters and protestors eventually turned to shoving and punching near the Oregon World War II Memorial, reported the Statesman Journal.

Andrew Sorg, who attended that “Salem Stands for Love” rally that took place simultaneously, was hospitalized with a concussion. He received three staples after being struck in the head with a wooden stick by a Trump supporter.

Another “Stands for Love” attendee, Emil Zook, was attacked by camouflaged man “swinging an object at me,” according to his written statement. “It hit me along my eye and the side of my head, and he prepared to hit me again. I stumbled away, made it about 40 feet, and collapsed.” Zook, who said he was not posing a threat to anyone, was taken to a Salem hospital. “The Salem police did not arrest the individual who assaulted me, despite a witness giving a clear description to an officer as I lay on the ground.”

AP reported that the Oregon State Police took into custody 31-year-old Matthew Curtis Heagy, a convicted felon, on suspicion of illegally possessing a firearm at the pro-Trump rally. Heagy is affiliated with the Oregon Three Percenters.

Whitten hopes his testimony will be considered by the Salem City Council and local law enforcement as verified proof of racial profiling.