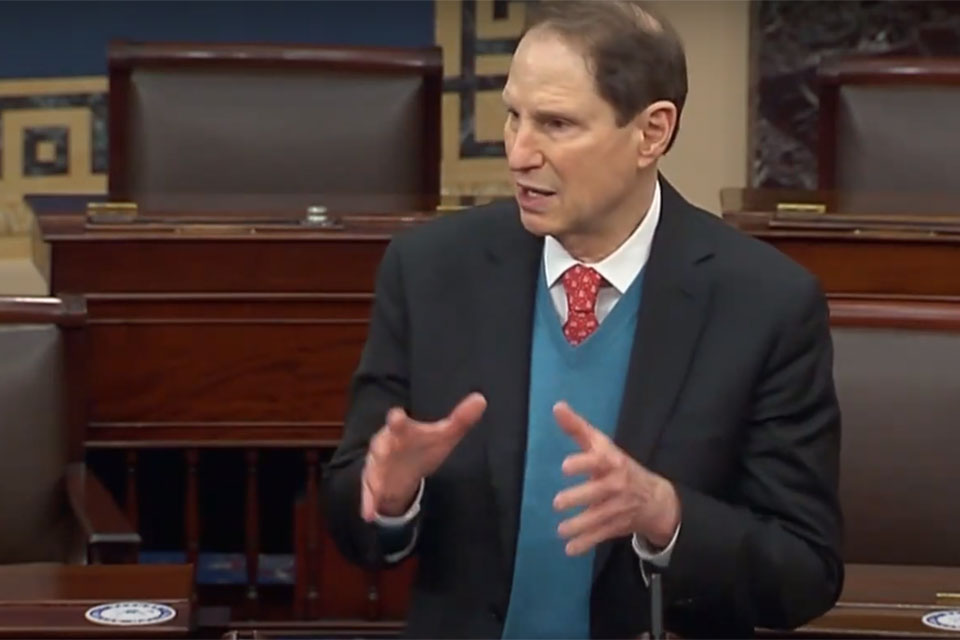 As stimulus checks go out in the following weeks, U.S. Sen. Ron Wyden (D-OR) wants to ensure Americans get all their money.

Senate Bill 823 would amend the $1.9 trillion American Rescue Plan Act passed earlier this month, protecting the up to $1,400 direct assistance payments by shielding them from public and private debt collectors, wage garnishment rulings, and any other financial levies that may be in place.

“We’ve got a lot of families in Portland and around the state just hanging by a thread, and they deserve rock-solid protection of their $1,400 covid relief payments so they can make rent and buy groceries,” Wyden told The Skanner.

“This is not complicated.

"You’re either with working families who desperately need help during the crisis, or you’re with private debt collectors reaching their hands into families’ pockets.”

Wyden joined Sens. Sherrod Brown (D-Ohio), Robert Mendez (D-N.J.) and Chris Van Hollen (D-Md.) to co-sponsor a bill that should theoretically garner bipartisan support. The precedent was set with December’s $600 direct stimulus payments, when Congress agreed to include such protections. But because Congressional Democrats used the reconciliation process to fast-track American Rescue Plan Act this month, the rules of reconciliation prevented them from stipulating that stimulus checks be earmarked for safeguarding in personal bank accounts.

Wyden and others attempted to close the loophole through this bill, which they presented to the Senate for unanimous consent. In response, Sen. Pat Toomey Pat Toomey (R-PA) last week blocked the proposal to pass the bill, unveiling new arguments that had not prevented him from supporting such a measure in December, under then-Pres. Trump.

On the Senate floor, Toomey criticized his Democratic colleagues for using reconciliation to pass the 2021 stimulus relief bill. He said he did not support protecting stimulus payments “deadbeat dads,” those whose wages are garnished to pay outstanding child support.

He also argued that the measure was too late, as all the stimulus checks had already been issued. As Wyden told The Skanner, that is inaccurate.

“The IRS said they were sending out 150 million checks. As of the last week -- these are the IRS’s words -- they said they sent 90 million.

Wyden added, “Republicans supported protections against predatory private debt collectors back in December. So they were with us before they became against us. You’ve got millions and millions of people hurting, and Pat Toomey is kind of flailing to find anecdotes.”

No Relief in Debt

Both private companies and public agencies, including the US Internal Revenue Service, employ private debt collection services to recoup outstanding payments. According to the National Consumer Law Center, about a third of American households, had at least one debt in collection prior to the economic fallout of the pandemic. That number rose to 42% for households in communities of color, where according to the NCLC, consumers tend to be sued at a higher rate and have fewer assets due to the employment and economic obstacles of systemic racism.

Individuals may find themselves on the hook for old bills when the original creditor sells the debt to private third-party debt collectors who often pursue payments more aggressively and through debt lawsuits, even in small claims court. An analysis by Pew Charitable Trusts found that in the past decade, 70% of such lawsuits end in default judgment for the debt collectors, suggesting that millions of defendants either decline to attend hearings or are unaware of court proceedings. Judgments typically include not only the amount owed, but additional interest and court fees, opening the defendant up to wage garnishment.

Aggressive collections tactics have not slowed during the pandemic. A report by KGW found that over a three-month period last summer, more than 500 judgments were issued in Multnomah County for wage garnishment to resolve debts.

In Oregon, consumers carry an average credit card balance of $4,681, according to credit reporting agency Experian's 2020 Consumer Credit Review. Oregon has one of the highest statutes of limitations on debt in the nation, giving creditors six years to pursue payment and legal action on mortgage, medical and credit card debt. California, by comparison, has a four-year statute of limitation.

“Wage garnishment is an interesting approach,” Michael Fuller, a Portland civil and consumer rights attorney, told The Skanner. “It gives you just enough of your money to survive, with added fees and interest is accruing at least 9% in the background. You can be wage-garnished for 20 years and never pay off the debt. Those judgments are good for up to 20 years in Oregon, and they can still end up in bankruptcy because of the interest.”

Another aspect of Oregon law that disempowers consumers, Fuller said, is the two-way fee-shifting provision in debt-collection lawsuits. In other words, consumers who file a lawsuit under the state’s debt collection laws risk potentially ruinous attorneys’ fees if they lose the case.

“Consumers rarely go to court because they could end up losing everything they have,” he said.

“The judges have interpreted Oregon’s debt collection laws very narrowly. There’s a chilling effect in Oregon that you don't see in other progressive states.”

Without the bill, individuals concerned about garnishment have few options for safeguarding their stimulus payments. Because the IRS is issuing relief funds through direct deposit using banking information from previous tax filings, many financial analysts agree that the most viable Plan B for those who have yet to receive a deposit is to close the relevant bank account, which would likely further delay stimulus payment, then bypass banks to cash the paper check at retail or check-cashing storefronts, both of which often charge high fees.

Fuller suggests individuals can also contact their banks and let them know in advance if they’re concerned about garnishment, to see if the banks will work with them to protect the deposit -- and then to withdraw the money as soon as it clears the account.

But he cautions that smaller, local banks are more likely to be responsive.

“Some banks will work with you, some banks will terminate you as a customer if you have judgments against you,” Fuller said. “Under Oregon laws, I would caution most people, if you’re poor and you can’t afford to pay your bills and your debts, you probably shouldn’t be relying too much on the banking system, because there’s very little protection.”

The fight is not over for those remaining 60 million Americans who have yet to receive their payments, Wyden said, adding that he and his cosponsors were considering their next steps, and might continue pushing for unanimous consent.

“My sense is that senators are going home, we’re going to be home for two weeks starting Thursday, and they’re going to hear from citizens, and citizens are going to say, ‘Whose side are you on?’” Wyden told The Skanner.

Eviction moratoriums are no longer automatic. As of March 1, the eviction moratorium in Oregon will be extended through June 30 only to renters who fill out and sign a sworn declaration of financial hardship and present it to their landlords. A copy of the declaration can be found here.

Under new state law, landlords cannot pursue an eviction for non-payment of rent once the tenant gives them such a declaration. Landlords may still terminate lease agreements by 90-day notice if they plan to sell the property to a new resident, convert the rental unit or units, demolish the property or make significant repairs that require tenants to move out.

There is some funding available to help landlords pay back rent, so renters have the option of urging their landlords to contact Oregon Housing and Community Services to request such funding. For information on individual rent assistance, renters can call 211 or visit 211info.org.