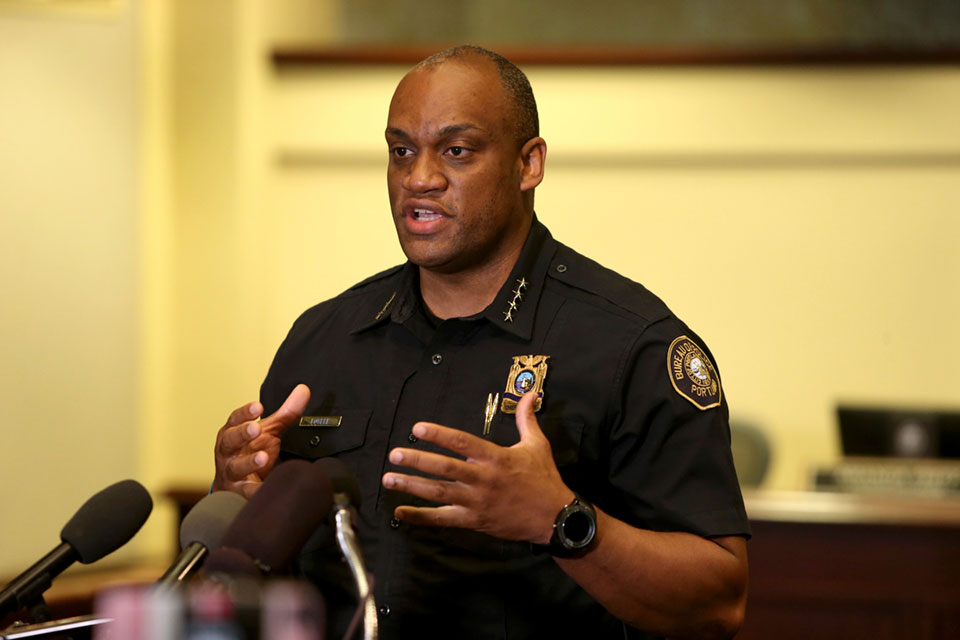 In addition, if police do stop a driver they must receive recorded consent before searching the vehicle and clearly inform the person they have the right to refuse.

Wheeler said both changes are an attempt to refocus on immediate threats and are also occurring in response to data showing a a disproportionate impact on Black drivers for traffic stops and vehicle searches. While 6% of Portlanders are Black, he said they account for 18% of traffic stops in the city.

Portland is not the first large city to make such a move regarding traffic stops. Oakland, California, has had a similar police for the last several years.

Portland Police Chief Chuck Lovell said while officers are being directed to halt pulling drivers over for low-level traffic violations, they will still use their judgement if the violation is an immediate threat.

For example, a car driving at night without lights, although a minor infraction, would be considered an immediate safety issue and could be pulled over.

Wheeler noted these changes are also being done in part because of the police bureau's limited staffing and resources.

“Our staffing on the streets is inadequate,” Wheeler said.

Currently the police bureau, which is struggling to find its grounding in the liberal city, is at its lowest staffing in decades — the department is around 150 officers short of “authorized strength".

In the past nine months, the department has experienced a rapid turnover with more than 120 officers having left, many citing low morale and burnout from racial justice protests that would end in confrontation and plumes of teargas.

The situation reached a breaking point last week when 50 police officers, who serve on a specialized crowd-control unit and respond to Portland’s ongoing protests, resigned en masse from the squad, but not the department.

The unit was on the frontlines of nightly racial justice protests, following the murder of George Floyd and were tasked with dispersing groups after a riot was declared. Officers often times were met with fireworks, rocks and glass bottles being thrown at them.

The move by officers to disband their own team came a day after a team member was indicted and accused of fourth-degree assault stemming from a baton strike against a protester last summer.

Last summer, while officers’ priorities were shifted to protests, Portland was also experiencing its deadliest year in more than a quarter-century.

Gun violence has spilled over into this year, with at least 42 homicides so far. If nothing changes, Portland will surpass its all-time record for homicides of 70 set in 1987, when the city was in the midst of a gang siege.

Police estimate half of Portland’s more than 500 shootings this year, which have injured more than 140 people, are gang-related. In May, Wheeler warned that perpetrators are being told by gangs to shoot someone within 30 days or be shot and that people are traveling from other states to engage in violence in the Rose City.

While long time residents say the gun violence in the city is they worst they have ever see, police are struggling to to find the resources, officers and funds to fully address it.

Last month, City Council voted to create a team of 12 officers and two sergeants to tackle gun violence, but with no additional funds.

Lovell said the department is “so lean right now” that officers would likely be pulled from patrol, domestic violence or human trafficking investigations to support the new team.

Despite police pleas for more personnel, city leaders slashed $27 million from the police budget last year — $11 million due to the pandemic-caused budget crisis and $15 million amid calls to defund the police — vowing to devote money to community groups working to curb gun violence.