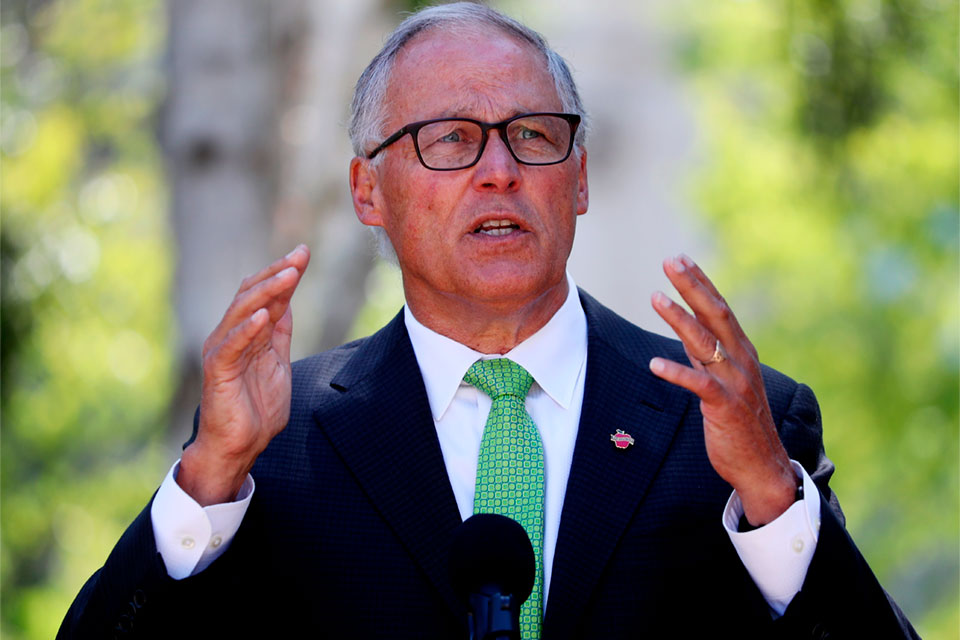 OLYMPIA, Wash. (AP) — Most state workers in Washington, as well as hundreds of thousands of private health care and long-term care employees, will be required to show proof of vaccination for COVID-19 by Oct. 18 or face losing their jobs, Gov. Jay Inslee announced Monday.

Weekly testing will not be an option for those who want to avoid vaccination and maintain their employment, and the only way to opt out of the requirement is with a medical or religious exemption.

Who is affected by the new order?

Inslee said the new rules — believed to be among the nation’s strictest — were necessary because of an increase in cases and hospitalizations tied to the delta variant.

“We have what is essentially a new virus at our throats,”

he said at a news conference. “The state of Washington is taking decisive action.”

The governor's order applies to about 60,000 employees of the 24 state agencies that are part of his executive Cabinet, which includes the departments of corrections, transportation and social and health services, and the Washington State Patrol. Vaccination will also be a requirement for any contractor wanting to do work with the state.

The order applies to those working remotely, since they may need to go to a work site at some point, according to a fact sheet issued to employees. The governor’s office said the overall number includes those who have already been vaccinated, so it’s unclear how many people the new rule affects.

Private sector employees who are covered under the order — estimated by officials at about 400,000 — include those who work in health care, long-term care and other group settings, such as nursing homes, assisted living and treatment facilities.

Like the state workers covered by the order, it's unclear how many of the private sector health and long-term care employees are unvaccinated.

“We’re hoping that a majority of those are already vaccinated and this is the additional folks that we’re now focusing on,” said Department of Health Secretary Umair Shah.

Not all agree with the mandate

Republican Sen. Mike Padden blasted the mandate, saying in an emailed statement that people “don’t deserve to be bullied and threatened into putting something into their body that they don’t want.”

"This is not only unnecessary and likely to result in greater rejection of the vaccine, but it’s a violation of basic civil liberties,” he wrote.

The order does not extend to: workers at state colleges and universities; teachers and staff at public K-12 schools; legislative employees; the judicial branch; and employees of Washington's eight other elected statewide officials, including staff for the lieutenant governor. Inslee's office said the governor — who is mandating vaccines for his employees — has spoken to elected officials and legislative leaders and encouraged them to follow suit.

Last month, Attorney General Bob Ferguson issued a rule to employees that requires proof of full vaccination for those who don't have a medical or religious exemption by Sept. 13, or else they'll face termination. Following Monday's news conference, Insurance Commissioner Mike Kreidler announced he would require his agency's 243 employees to be vaccinated.

President Joe Biden recently announced federal workers will be required to sign forms attesting they’ve been vaccinated against the coronavirus, or else comply with new rules on mandatory masking, weekly testing, distancing and more. The U.S. Department of Veteran Affairs has mandated COVID-19 vaccines among its medical employees.

Inslee announced Washington's mandate at Kaiser Permanente, which said last week it was making the vaccine mandatory for all employees and physicians. The city of Seattle and King County are requiring the same for their employees.

At the end of last month, Inslee said the state was following federal guidance and recommending that everyone regardless of vaccination status wear a mask in public indoor settings in areas where there is “substantial or high” rates of COVID-19.

As of this weekend, most of the state's 39 counties were in the “high” threshold, with three in the “substantial” range.

There have been more than 445,000 confirmed COVID-19 cases — plus another 43,000 “probable” cases — in Washington state, and 6,168 deaths. State health officials say that most of the state’s new infections are caused by the delta variant, a more contagious version of the coronavirus.

As of last week, nearly 70% of people age 12 and older had received at least one dose of the coronavirus vaccine. About 62% are fully vaccinated.