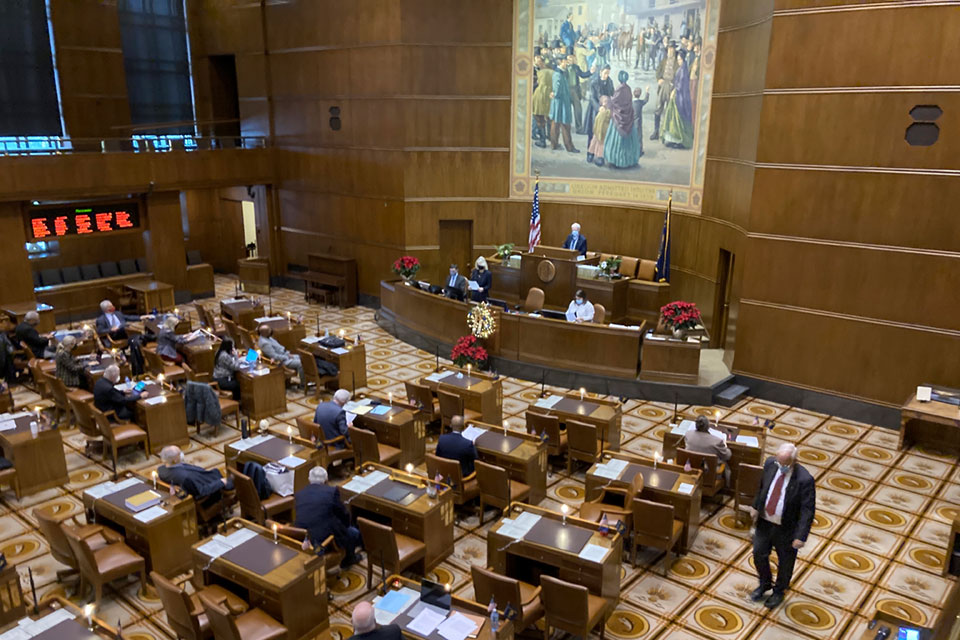 PORTLAND, Ore. (AP) — As Oregon lawmakers return to the Capitol on Tuesday for the 2022 legislative session, their priorities include affordable housing, bolstering the state’s workforce, a $500 million cushion for the next biennium, tax cuts and limiting the emergency power of the governor.

But how much money legislators are envisioning spending has yet to be determined, as lawmakers await an updated revenue and economic forecast for Oregon that will be presented Feb. 9.

During the last revenue forecast, in November, state economists predicted general fund and lottery revenues would come in $1.5 billion higher than they expected when lawmakers finalized the current, two-year $27 billion budget.

“There’s obviously a revenue forecast that’s going to come up here shortly that will change what the numbers are, you know, plus or minus,” said Democratic Rep. Dan Rayfield, the House Speaker designate. “In terms of what we want to spend is also a derivative of how much we want to maintain and our ending fund balance.”

However, majority Democrats and Gov. Kate Brown have suggested approving $1 billion to $2 billion in spending during the five-week session.

During the annual Associated Press Legislative Preview, Brown said she wants lawmakers to set aside a significant amount of money – at least $500 million – to save for the next biennium. The Democrat said it “is very likely that we’re going to see a challenging budget cycle” if the state revenues weaken. Last year, the governor and legislative leaders discussed saving as much as $1 billion to hedge against a downturn in the next budget cycle.

Among other priorities, one of the largest proposed spending packages is $400 million for affordable housing, homelessness prevention and rental assistance.

“We know too many Oregonians who are struggling to make rent or buy a home,” House Majority Leader Julie Fahey said. “This session we will pass additional investments and policies to address housing and homelessness.”

Brown is also proposing $200 million for a workforce development plan, which aims to prioritize key populations disproportionately impacted by COVID-19 and existing disparities — including Oregonians of color, women, low-income individuals, rural communities, veterans and those who are incarcerated or formerly incarcerated.

The plan would include $95 million to solve problems that keep people out of the workforce, such as covering the cost of tuition and fees for school and training programs, transportation, housing, food and childcare.

"The goal is to give Oregonians the tools, the resources and, frankly, create career pathways that are sustainable,”

Other spending packages include $120 million to relocate Harriet Tubman Middle School in Portland from along Interstate 5, more than $120 million to permanently protect the Elliott State Forest, $100 million to expand childcare and raise provider pay, $30 million for college grants to students who are members of Oregon’s nine federally recognized Native American tribes and $38 million to help small businesses.

Among the major policy proposals, that lawmakers could consider during the 35-day session, are setting campaign contribution limits, a bill requiring police officer to inform a stopped person of right to refuse consent to search and a bill that allows Oregonians to pump their own gas.

Lawmakers express their own goals

Senate President Peter Courtney, D-Salem, said he would like lawmakers to approve money to continue expanded summer school programming, if not “year-round” schooling to help students catch up after many fell behind when classes went online due to the pandemic.

“The only way you’re going to be able to repair the damage to some of these kids is to be able to have them in school longer,” Courtney said

On the Republican side, Rep. Mark Owens is proposing an amendmen t to Oregon Constitution to limit the ability of the governor to declare an emergency.

“It’s time for accountability and fairness in how these decisions are made. One sole person should not have ultimate and unchecked authority when it comes to determining the rights and freedoms of Oregonians,” Owens said.

During the legislative preview, it was clear that the two political parties have differing views of the session. While Republicans say traditionally the short legislative session is used to address budget fixes and technical issues from the previous year’s long session, Democrats say some larger items can’t wait.

While both parties are cautiously optimistic they can get along, especially as there have been significant leadership changes from the previous session, House Minority Leader Vikki Breese-Iverson reiterated that “tools” are on the table, which in the past has included walkouts.

“If we see highly partisan and complex bills being rushed through the Legislature in February, Republicans are prepared to use the tools necessary to protect Oregonians from even more negative consequences from the majority’s short-sighted policies and failed leadership,” Breese-Iverson said.