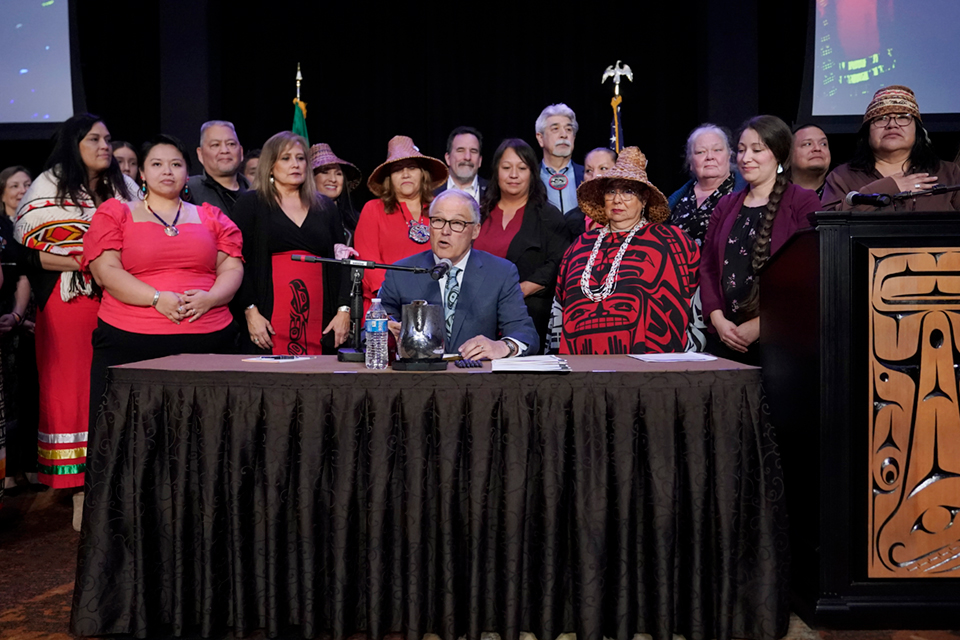 TULALIP, Wash. (AP) — Washington Gov. Jay Inslee on Thursday signed into law a bill that creates a first-in-the-nation statewide alert system for missing Indigenous people, to help address a silent crisis that has plagued Indian Country in this state and nationwide.

The law sets up a system similar to Amber Alerts and so-called silver alerts, which are used respectively for missing children and vulnerable adults in many states. It was spearheaded by Democratic Rep. Debra Lekanoff, the only Native American lawmaker currently serving in the Washington state Legislature, and championed by Indigenous leaders statewide.

“I am proud to say that the Missing and Murdered Indigenous Women’s and People’s Alert System came from the voices of our Native American leaders,” said Lekanoff, a member of the Tlingit tribe and the bill’s chief sponsor.

"Our sisters, our aunties, our grandmothers are going missing every day ... and it’s been going on for far too long.” 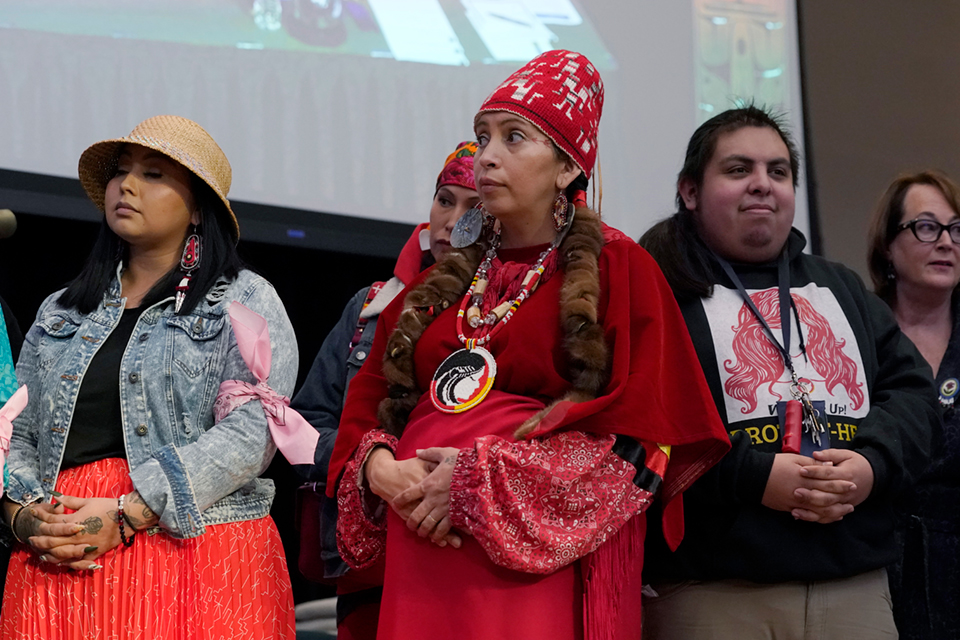 Earth-Feather Sovereign, center, founder of Missing and Murdered Indigenous Women Washington and a member of the Colville Confederated Tribes, stands with other supporters after Washington Gov. Jay Inslee signed a bill that creates a first-in-the-nation statewide alert system for missing Indigenous people — particularly women, Thursday, March 31, 2022, in Quil Ceda Village, near Marysville, Wash., north of Seattle. The law creates a system similar to Amber Alerts, which are used for missing children in many states. (AP Photo/Ted S. Warren)

Tribal leaders, many of them women, wore traditional hats woven from cedar as they gathered around Inslee for the signing on the Tulalip Reservation, north of Seattle. Afterward they gifted him with a handmade traditional ribbon shirt and several multicolored woven blankets.

The law attempts to address a crisis of missing Indigenous people — particularly women — in Washington and across the United States. While it includes missing men, women and children, a summary of public testimony on the legislation notes that “the crisis began as a women’s issue, and it remains primarily a women’s issue.”

Besides notifying law enforcement when there’s a report of a missing Indigenous person, the new alert system will place messages on highway reader boards and on the radio and social media, and provide information to the news media.

The legislation was paired with another bill Inslee, a Democrat, signed Thursday that requires county coroners or medical examiners to take steps to identify and notify family members of murdered Indigenous people and return their remains. That new law also establishes two grant funds for Indigenous survivors of human trafficking.

This piece of the crisis is important because in many cases, murdered Indigenous women are mistakenly recorded as white or Hispanic by coroners' offices, they're never identified, or their remains never repatriated. 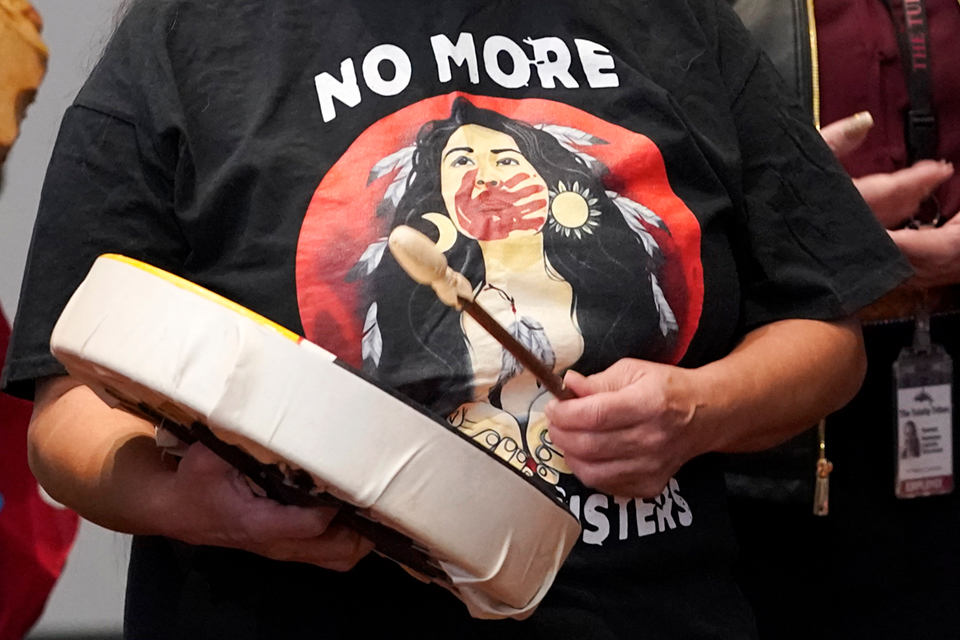 Monie Ordonia, of the Tulalip Indian Tribe, plays a drum as she joins others in singing an honor song after Washington Gov. Jay Inslee signed a bill that creates a first-in-the-nation statewide alert system for missing Indigenous people — particularly women, Thursday, March 31, 2022, in Quil Ceda Village, near Marysville, Wash., north of Seattle. The law creates a system similar to Amber Alerts, which are used for missing children in many states. (AP Photo/Ted S. Warren)

A 2021 report by the nonpartisan Government Accountability Office found the true number of missing and murdered Indigenous women in the U.S. is unknown due to reporting problems, distrust of law enforcement and jurisdictional conflicts. But Native American women face murder rates almost three times those of white women overall — and up to 10 times the national average in certain locations, according to a 2021 summary of the existing research by the National Congress of American Indians. More than 80% have experienced violence.

In Washington, more than four times as many Indigenous women go missing than white women, according to research conducted by the Urban Indian Health Institute in Seattle, but many such cases receive little or no media attention.

Praying for their return

The bill signing began with a traditional welcome song passed down by Harriette Shelton Dover, a cherished cultural leader and storyteller. Dover recovered and shared many traditions and songs from tribes along Washington's northern Pacific Coast and worked with linguists before her death in 1991 to preserve her language, Lushootseed, from extinction. Women performed an honor song after the event.

Tulalip Tribes of Washington Chairwoman Teri Gobin said Washington and Montana are the two states with the most missing Indigenous people in the U.S. Nearly four dozen Native people are currently missing in Seattle alone, she said.

she said. “It’s a wound that stays open, and it’s something that we pray with (for) each person, we can bring them home."

Investigations into missing Indigenous people, particularly women, have been plagued by many issues for decades.

When a person goes missing on a reservation, there are often there are jurisdictional conflicts between tribal police and local and state law enforcement. A lack of staff and police resources, and the rural nature of many reservations, compound those problems. And many times, families of tribal members distrust non-Native law enforcement or don't know where to report news of a missing loved one.

An alert system will help mitigate some of those problems by allowing better communication and coordination between tribal and non-tribal law enforcement and creating a way for law enforcement to flag such cases for other agencies. The law expands the definition of “missing endangered person” to include Indigenous people, as well as children and vulnerable adults with disabilities or memory or cognitive issues.

The law takes effect June 9 and some details are still being worked out. For example, it's unclear what criteria law enforcement will use to positively identify a missing person as Native American and how the information will be disseminated in rural areas, including on some reservations, where highways lack electronic reader boards — or where there aren't highways at all.

The measure is the latest step Washington has taken to address the issue. The Washington State Missing and Murdered Indigenous Women and People Task Force is working to coordinate a statewide response and had its first meeting in December. Its first report is expected in August.

Indigenous protection in other states

Many states from Arizona to Oregon to Wisconsin have taken recent action to address the crisis of murdered and missing Indigenous women. Efforts include funding for better resources for tribal police to the creation of new databases specifically targeting missing tribal members. Tribal police agencies that use Amber Alerts for missing Indigenous children include the Hopi and Las Vegas Paiute.

In California, the Yurok Tribe and the Sovereign Bodies Institute, an Indigenous-run research and advocacy group, uncovered 18 cases of missing or slain Native American women in roughly the past year in their recent work — a number they consider a vast undercount. An estimated 62% of those cases are not listed in state or federal databases for missing persons.

The law is already drawing attention from other states, whose attorney generals have called to ask how to enact similar legislation, said state Attorney General Bob Ferguson, who called the law “truly groundbreaking.”

“Any time you’re doing something for the first time in this country, that’s an extra heavy lift,” he said. “This most certainly will not be our last reform to make sure that we bring everybody back home. .. There is so much more work that needs to be done and must be done.”