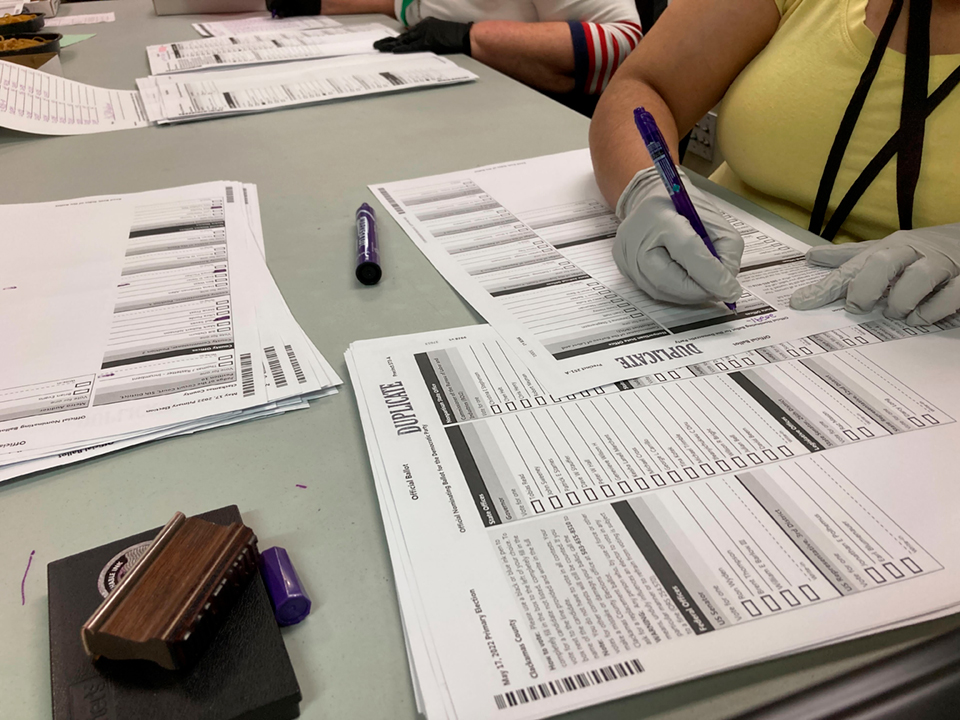 PORTLAND, Ore. (AP) — The fate of seven-term incumbent Democratic U.S. Rep. Kurt Schrader hung in the balance Wednesday as election officials in Oregon's third-largest county scrambled to tally tens of thousands of ballots with blurry barcodes that were being rejected by vote-counting machines.

Clackamas, a sprawling county of nearly 2,000 square miles (5,180 square kilometers), includes a large swath of Schrader's redrawn 5th District, where he is facing a stiff challenge in a key U.S. House primary from progressive candidate Jamie McLeod-Skinner. Schrader was trailing in the vote count Wednesday, but the race remained too close to call largely because of outstanding results from the county south of Portland.

The county stretches from Portland's liberal and affluent southern suburbs to more conservative rural communities and all the way to the flanks of Mount Hood. About 95,000 ballots had been returned by Wednesday and roughly 60% were being rejected by the machines, said county Elections Clerk Sherry Hall.

The county reported results for just 10,356 ballots on Tuesday night and more results would be posted by 5 p.m. Thursday, she said. The tally will be done by June 13, which is the last day to certify results under state law, Hall said.

Hall, who will face her own challenger in a November reelection bid, said earlier this month that the issue was first discovered May 3, when it was already too late to print new ballots.

Elections workers were transferring the votes by hand to fresh ballots so they could be counted in a tedious and slow process.

County Chairwoman Tootie Smith said at a news conference it was “all hands on deck,” and 200 county workers were being reassigned to ballot duplication duties in two shifts starting Thursday. The county offered Hall extra staff in early May when the problem came to light, Smith said, and Hall didn't accept the offer. Elections workers from two other Oregon counties may also help, she said.

“Other jobs will just be on pause until this work is done,” Smith said. “This was a big mistake ... and we have to fix it and move forward.” 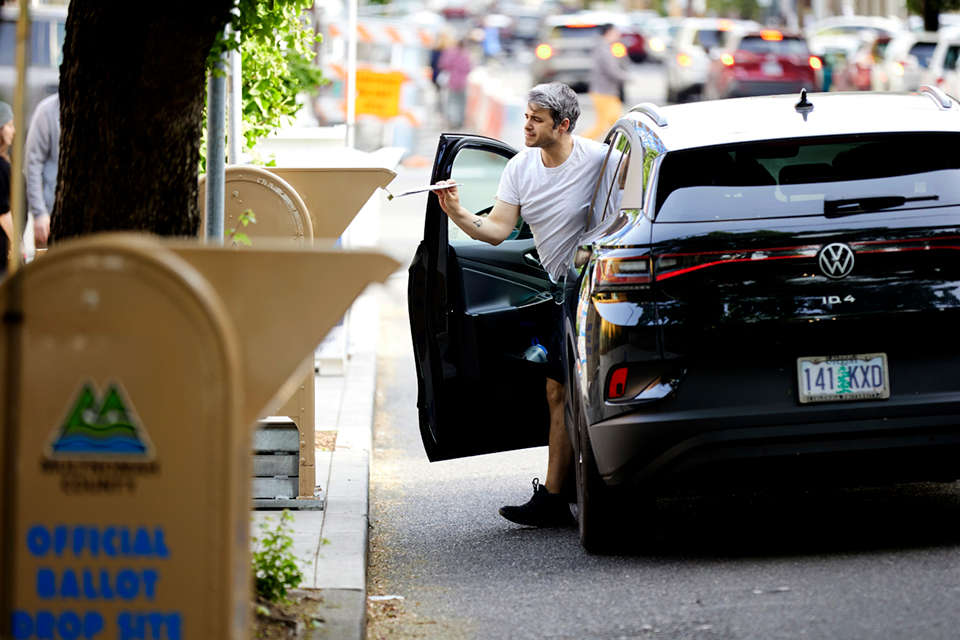 A voter gets out of his car to drop his ballot into a Multnomah County collection box in Portland, Ore., Tuesday May 17, 2022. The state is holding its primary elections. (AP Photo/Craig Mitchelldyer)

Oregon Secretary of State Shemia Fagan blasted the county in a statement late Tuesday, saying the delay was “unacceptable” and she was “disappointed” with the lack of urgency shown by elections officials there.

“Voters have done their jobs, now it’s time for Clackamas County Elections to do theirs,” Fagan said.

“We will be posting as we’re completing the ballot processing — that’s all I can say,” Hall said in a phone interview Wednesday. “Most of (Schrader’s) district is in Clackamas County and I know that’s a really hot item to know but we are processing and we will report as we know.”

In a tweet Wednesday, McLeod-Skinner thanked voters and urged patience.

“It’s important to respect the integrity of our elections. Some ballots may take additional time & we respect the process,” she wrote.

“What matters is that every Oregonian’s vote is counted.”

Schrader’s campaign did not return email and phone messages seeking comment and he didn't post on social media about the delayed results.

Meanwhile a cryptocurrency billionaire-backed political newcomer conceded to a longtime state lawmaker in Oregon's new 6th District, which was one of the nation’s most expensive Democratic congressional primaries.

In the 6th District southwest of Portland, political novice Carrick Flynn tweeted late Tuesday he was conceding to state Rep. Andrea Salinas, who would be Oregon's first Hispanic congresswoman if elected in November. Flynn said he would campaign for Salinas, who was endorsed by Massachusetts Democratic Sen. Elizabeth Warren, a standard-bearer for the party's progressive wing. 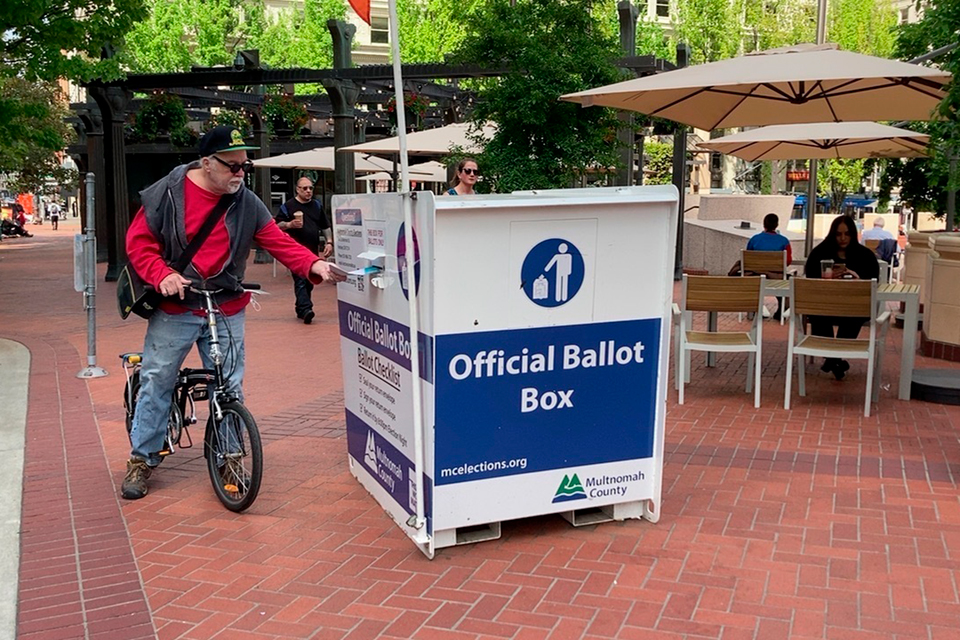 A voter drops off a ballot at a box in Pioneer Courthouse Square in Portland, Ore., Tuesday, May, 17, 2022. The state is holding its primary elections. (AP Photo/Gillian Flaccus)

Money poured into the Democratic race for the newly created 6th District seat that featured Flynn and Salinas, a three-term state lawmaker. The race has attracted a total of 16 candidates combined for the House seat created by the 2020 census reapportionment.

“It is vital that this seat turn blue and Democrats retain control of the House,” Flynn wrote.

In the 5th District, Schrader was fighting to hang on in a dramatically redrawn district that leans a little less blue.

he district, which once stretched to the Pacific Coast, now reaches east to include Bend, where Schrader has less name recognition. President Joe Biden recently endorsed Schrader, a veterinarian and former state lawmaker, but he has alienated progressive members of his party over the course of his last term.

He was one of two House Democrats to vote against a $1.9 trillion pandemic relief package, in part because he didn’t want the bill to include an increase in the minimum wage. He also voted in committee against a Biden-supported plan that would have allowed Medicare to negotiate outpatient medication prices with pharmaceutical companies.

But some primary voters are concerned that McLeod-Skinner, an attorney and former city planner, wouldn’t be as competitive in November, particularly given that issues such as crime and homelessness are on the minds of moderate Democrats.