Here's How Abortion Clinics Are Preparing for Roe to Fall 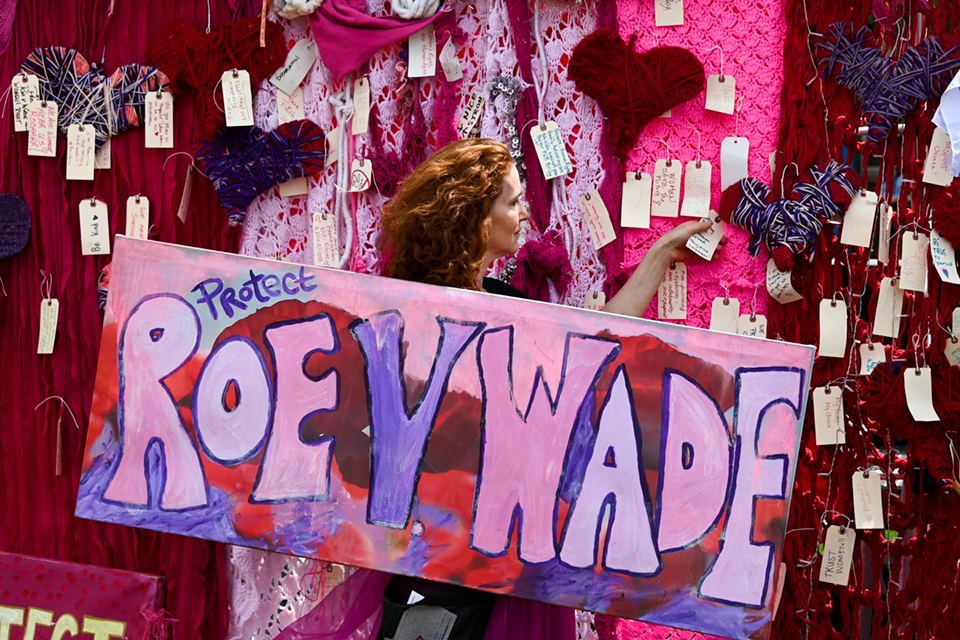 JACKSON, Miss. (AP) — Leaders of a Tennessee abortion clinic calculated driving distances and studied passenger rail routes as they scanned the map for another place to offer services if the U.S. Supreme Court lets states restrict or eliminate abortion rights.

They chose Carbondale in Illinois — a state that has easy abortion access but is surrounded by more restrictive states in the Midwest and South. It will be the southernmost clinic in Illinois when it opens in August.

“I think at this point, we all know the stark reality that we’re facing in Tennessee. We are going to lose abortion access this year,” said Jennifer Pepper, chief executive officer of CHOICES: Memphis Center for Reproductive Health.

With the Supreme Court poised to let states tightly limit or ban abortion, reproductive rights advocates are planning to open new clinics or expand existing ones in states where lawmakers are not clamping down on access. 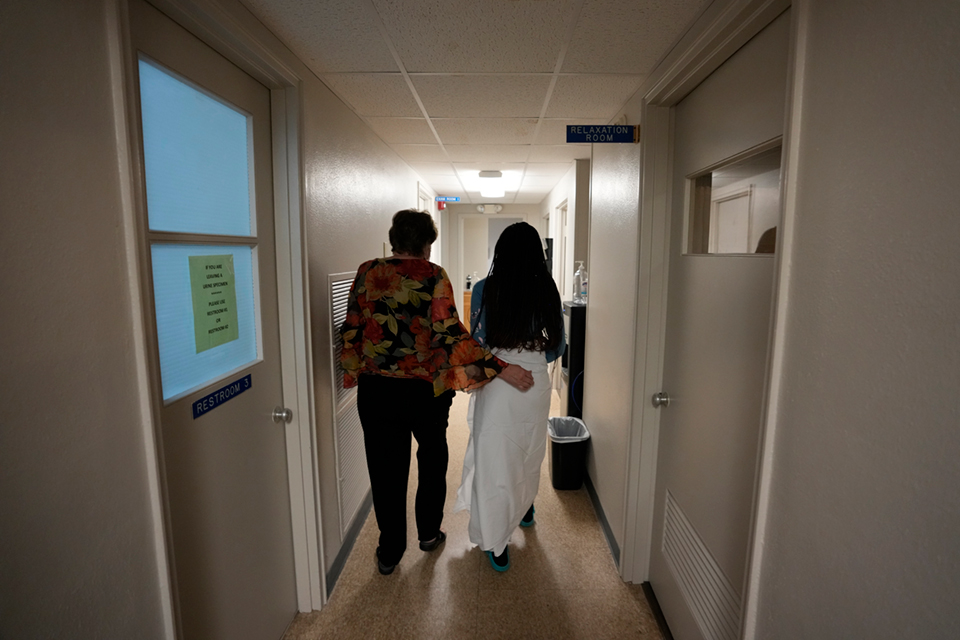 FILE - A 33-year-old mother of three from central Texas is escorted down the hall by clinic administrator Kathaleen Pittman prior to getting an abortion, Oct. 9, 2021, at Hope Medical Group for Women in Shreveport, La. Reproductive rights advocates are planning to open new abortion clinics or expand the capacity of existing ones in states without restrictive abortion laws. (AP Photo/Rebecca Blackwell, File)

Some Democrat-led states in the West and Northeast also are proposing public money for an expected influx of people traveling from other places to terminate pregnancies.

When it opened in 1974, a year after the Roe v. Wade decision legalizing abortion nationwide, CHOICES became the first abortion provider in Memphis, a commercial hub for rural Tennessee, Arkansas, Mississippi and southern Missouri.

Carbondale is a three-hour drive north of Memphis and Nashville, Tennessee's two largest cities. It's also on a New Orleans-to-Chicago Amtrak route through areas where abortion access could disappear, including Mississippi, western Tennessee and western Kentucky.

“Its location and geography were the original reason that drew us to Carbondale, but the incredible heart of the Carbondale community is what led us to know we had found a second home for CHOICES,” Pepper said in announcing the plan last week.

The Supreme Court is expected to rule in the coming months in a case directly challenging Roe. Justices heard arguments in December over a 2018 Mississippi law to ban most abortions after 15 weeks. The court has allowed states to regulate but not ban abortion before the point of viability, around 24 weeks.

A draft opinion leaked May 2 showed a majority of justices were ready to overturn Roe v. Wade. If the final ruling is similar, states would have wide latitude to restrict abortion. The Guttmacher Institute, which supports abortion rights, says 26 states are certain or likely to ban abortion if the Roe is weakened or overturned. 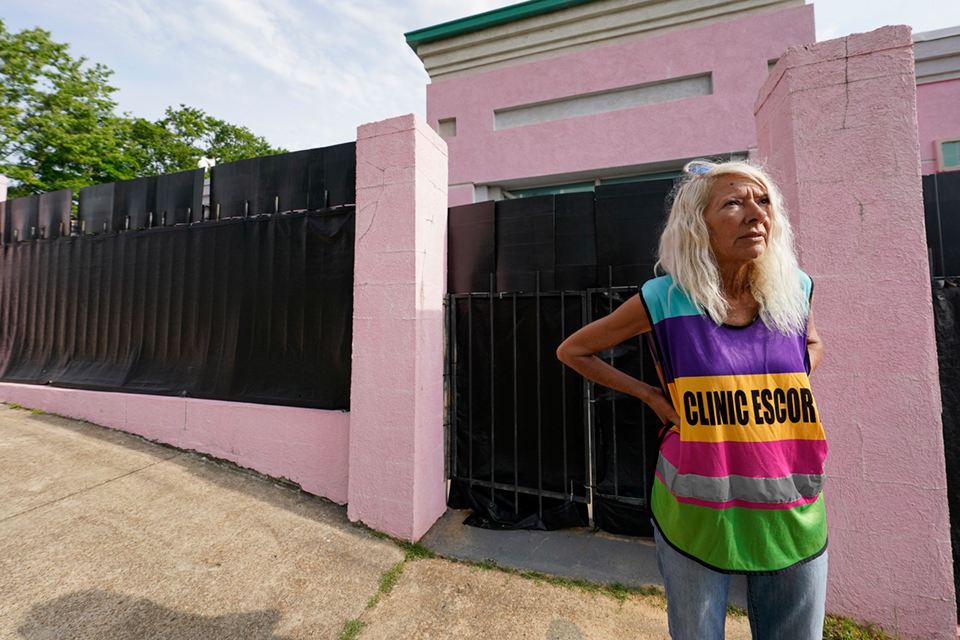 FILE - Derenda Hancock, co-organizer of the "Pink House Defenders," stands outside the Jackson Women's Health Organization, Mississippi's last remaining abortion clinic, also known as the "Pink House", May 3, 2022, in Jackson, Miss. Mississippi is one of the poorest states in the nation, and women would face even steeper hurdles to have access to abortion — arranging time off work, finding ways to pay for travel and lodging and, in many cases, arranging for child care while they are gone. (AP Photo/Rogelio V. Solis, File)

Diane Derzis owns Mississippi’s only abortion clinic, Jackson Women's Health Organization. She told The Associated Press that the clinic, also known as the Pink House, will close if Roe is overturned because Mississippi has a “trigger” law to automatically prohibit abortion.

Mississippi is one of the poorest states in the nation, and women would face even steeper hurdles to have access to abortion — arranging time off work, finding ways to pay for travel and lodging and, in many cases, arranging for child care while they are gone.

“Mississippi is a prime example of what’s going to happen to the women of this country,"

Derzis said. "Those who have the means will be able to fly to New York. The poor women and women of color will be desperately trying to find the closest clinic.”

Derzis said she plans to open an abortion clinic soon in Las Cruces, New Mexico, about an hour's drive north of El Paso, Texas. Since Texas enacted a law last year banning most abortions at about six weeks, women have traveled to New Mexico, Oklahoma, Louisiana and other states to end pregnancies. Earlier this month, a Texas-style abortion ban that prohibits abortions after about six weeks of pregnancy took effect in Oklahoma.

“You can’t stop a woman who’s pregnant and doesn’t want to have a baby,” Derzis said.

An association of abortion providers, the National Abortion Federation, gives health and travel information as well as money to pregnant women who have to travel to obtain an abortion. The federation’s chief program officer, Melissa Fowler, said many lives will be disrupted.

“The reality for many people in the country is going to be days of travel, days off of work,” Fowler said.

“Even if we fully fund someone’s travel, some people’s lives just don’t allow them to make the trip.”

Jennifer Allen, CEO of Planned Parenthood Alliance Advocates, which covers Alaska, Hawaii, Idaho, Indiana, Kentucky and Washington, said even in states like Washington, where there's strong support for abortion rights, “it’s going to take a whole lot more to be ready for the future.”

Washington has more than 30 abortion clinics, though just five are east of the Cascade Mountains, in the more conservative part of the state. Democratic Gov. Jay Inslee signed a measure this year authorizing physician assistants, advanced registered nurse practitioners and other providers acting within their scope of practice to perform abortions. Abortion-rights supporters said that will help meet the demand from out-of-state patients.

Allen said it’s impossible to predict how many out-of-state residents will seek care in Washington, but the increase could be in the thousands. She said reproductive rights advocates are working to anticipate the needs.

“We are building this plane while we’re flying it,” Allen said.

In response to the leaked Supreme Court draft, Inslee promised Washington would provide sanctuary for those seeking abortions. His office said discussions are underway on a range of possibilities. But the Legislature is not likely to reconvene before its regular session begins in January. 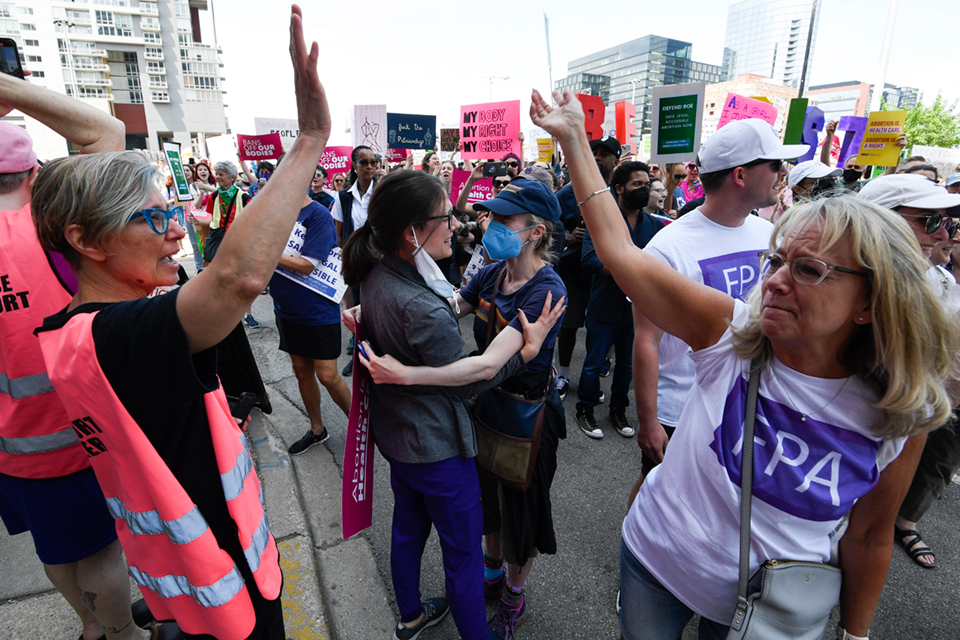 FILE - Staff members of the Family Planning Association clinic greet abortion rights demonstrators, May 14, 2022, in Chicago. As of June 1, minors will no longer be required to notify a parent or guardian before getting an abortion in the state, an action that abortion-rights proponents considered the last roadblock to unfettered access in Illinois. (AP Photo/Matt Marton, File)

Last week, California Gov. Gavin Newsom proposed $57 million in abortion funding on top of $68 million proposed in January. The Democrat said the new proposals include $40 million to pay for abortions for women not covered by Medicaid or private insurance, $15 million for a public education campaign, $1 million for a website listing abortion services and $1 million for research into unmet needs for reproductive health care services.

Newsom has already signed a law to make abortions cheaper for people with private insurance. The Legislature is considering other bills to increase abortion access, including proposals to let more nurse practitioners perform them.

New York will make $35 million available for abortion services and security, Gov. Kathy Hochul announced last week. She said some of that money could be spent on abortions for out-of-state residents traveling to New York.

In March, Oregon lawmakers approved $15 million to pay for abortions and support services such as travel and lodging for in-state or out-of-state patients who travel long distances, and to expand abortion availability. Details are still being discussed, including the possibility of mobile clinics or hiring more workers for existing clinics.

“We do know that, likely, Oregon will be a place that people will be forced to travel to get care,” said An Do, executive director of Planned Parenthood Advocates of Oregon.

The Guttmacher Institute reported Oregon could see a 234% increase in women coming from other states, many from Idaho, if the court overturns Roe v. Wade.

Overwhelming Democratic majorities in the Illinois General Assembly have been preparing for a Roe rollback for years, particularly because the state would be an island amid neighbors with restrictions.

In 2017, Illinois approved public funding for abortion and repealed a 1975 “trigger” law. The state's Reproductive Health Act of 2019 established the fundamental right for people to make their own decisions about contraception and abortion. As of June 1, minors will no longer be required to notify a parent or guardian before getting an abortion, an action that abortion-rights proponents considered the last roadblock to unfettered access in Illinois.

“We have been preparing for the day Roe falls and we are ready,”

Fowler, with the National Abortion Federation, said even though providers in states without restrictive abortion laws "are doing all they can to preserve and expand access, the current system just does not have the capacity to handle the number of patients who will be without care.”

“We need to be just as creative and robust in our solutions as our opponents have been in designing these terrible restrictions," she said.