Tough Jabs at Michelle Obama Do Little to Burnish Her Credentials 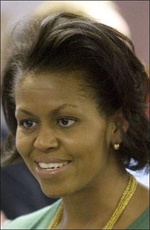 COLUMBUS, Ohio (AP) _ It has been a rough 10 days for Michelle Obama.

Internet rumors claimed there was a videotape of her criticizing "whitey" from a church pulpit. A Fox News analyst suggested that her affectionate on-stage knuckle bump with her husband, on the night he locked up the Democratic presidential nomination, might have been a "terrorist's fist jab." Fox also labeled her a "baby mama," a term some use for unwed mothers.

The rumors and innuendo reached the point that Barack Obama's campaign launched a new Web Site this week, fightthesmears.com. The first allegation it denied was the "whitey" claim, stating, "No such tape exists."

On Friday, Michelle Obama made her first public appearance since these hubbubs arose, and the campaign made sure she had a nice, soft landing.

She introduced her husband to about 40 elderly people at the Oakleaf Village retirement center in Columbus, Ohio. The potential first lady quickly had the roomful of grandparents chuckling and applauding as she managed to praise them along with her husband and their two daughters.

Noting that her 70-year-old mother cares for the girls when she is away, Obama said, "she does just what I'm sure you do. She treats them like queens."

"They get ice cream all the time, they're jumping on the couch," she said, prompting laughter. And when she protests that her mother never treated her own children that way, Obama continued, the reply is, "'Yes. You weren't my grandchildren."'

She quickly tied the anecdotes to her husband's theme of the day, retirement security. Her mother can help so much, Michelle Obama said, because of Social Security and her late father's pension benefits.

"In the Obama household," she said, "we know that we have to do the utmost to make sure that our seniors are whole and they're healthy and they're thriving."

In her four-minute speech, Michelle Obama also burnished her patriotic credentials, which have come under attack from various critics. The Tennessee Republican Party aired a video of her saying earlier this year that she was proud of her country "for the first time during my adult lifetime."

Obama told the elderly audience that her daughter, Malia, "will be 10 on the Fourth of July. Yes, we planned it that way. I cooperated. I was supposed to have her on July first, but I waited, because my daughter would be more historic."

Barack Obama picked up his cues after his wife spoke of her pride and faith in him.

"Who is that person?" he said playfully. "She never says such nice things about me at home. But I revel in it, I really enjoy listening to her praise me like that, because when I get home, she will remind me that I didn't make the bed."