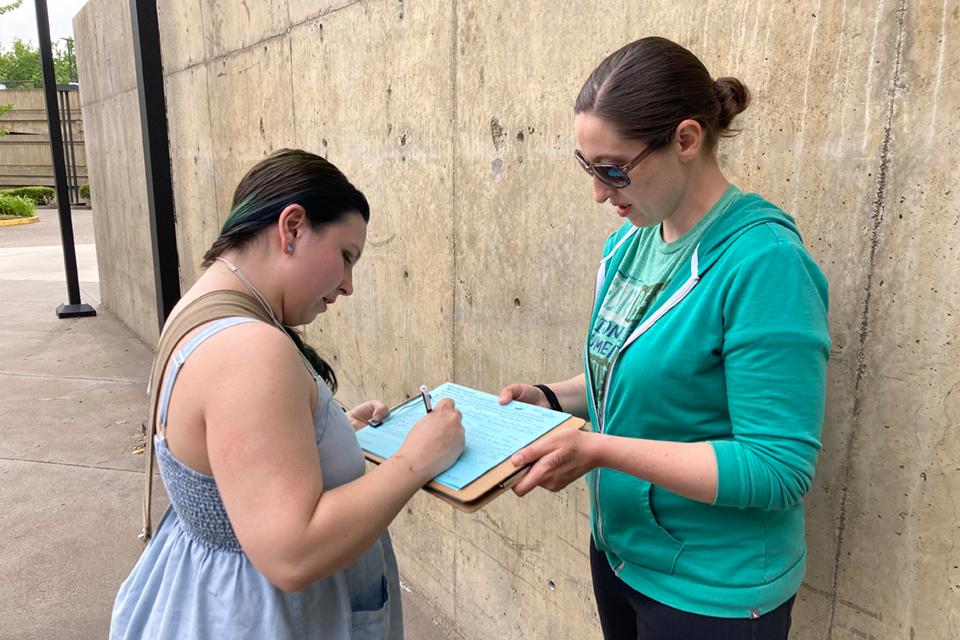 SALEM, Ore. (AP) — When Raevahnna Richardson spotted a woman standing outside a library in Salem, Oregon, gathering signatures for a gun-safety initiative, she made a beeline to her and added her name.

“I signed it to keep our kids safe, because something needs to change. I have a kid that’s going to be in first grade this upcoming season, and I don’t want her to have to be scared at school,” Richardson said.

“To keep our kids safe.” It's something that so many parents across the United States are worried about after the horrific massacre of 19 children and two teachers in Uvalde, Texas. That mass shooting has given the Oregon ballot initiative huge momentum, with the number of volunteers doubling to 1,200 and signatures increasing exponentially, organizers said.

With the U.S. Senate unlikely to pass a “red flag” bill and the majority of state legislatures having taken no action on gun safety in recent years, or moving in the opposite direction, activists see voter-driven initiatives as a viable alternative.

“To get really strong action at this moment in time, it’s going to take people in a democracy to exercise that democratic right to get on the ballot and get it voted for,” said the Rev. Mark Knutson, a chief petitioner of the Oregon initiative.

If the initiative gets on the ballot and it passes, anyone wanting to acquire a firearm would first have to get a permit, valid for five years, from local law enforcement after completing safety training, passing a criminal background check and meeting other requirements. The measure would ban ammunition magazines over 10 rounds, except for current owners, law enforcement and the military, and the state police would create a firearms database.

The age range of those gathering signatures from registered voters runs from middle-schoolers to a 94-year-old, Knutson said. Volunteers are ensconced in a room at Augustana Lutheran Church in Portland, sorting through baskets of envelopes containing mailed-in signatures.

The National Rifle Association's Institute for Legislative Action has already come out strongly against the initiative, saying on its website that “these anti-gun citizens are coming after YOU, the law-abiding firearm owners of Oregon, and YOUR guns. They don’t care about the Constitution, your right to keep and bear arms, or your God-given right of self-defense.”

Oregon appears to be the only state in America with a gun safety initiative underway for the 2022 election, according to Sean Holihan, state legislative director for Giffords, an organization dedicated to saving lives from gun violence.

Knutson, though, says the effort in Oregon “can start to build hope across the nation for others to do the same."

In 2018, Washington state voters approved restrictions on the purchase and ownership of firearms, including raising the minimum purchasing age to 21, adding background checks and increasing waiting periods. In 2016, voters there overwhelmingly approved a measure authorizing courts to issue extreme risk protection orders to remove an individual’s access to firearms.

California voters in 2016 passed a measure prohibiting the possession of large-capacity ammunition magazines and requiring certain individuals to pass a background check to buy ammunition.

The same year, voters in Maine narrowly defeated a proposal to require background checks before a gun sale.

Daniel Webster, co-director of the Center for Gun Violence Solutions at Johns Hopkins University, said ballot initiatives “are a great way to advance gun policies that are popular.”

“But I honestly don’t know how much one state’s ballot initiative affects the likelihood of other states taking action,” he added.

The Oregon initiative needs to deliver at least 112,080 registered voters’ signatures — verified by the secretary of state’s office — by July 8 to get on the ballot, Knutson said. By this week, more than 52,000 signatures were received by the campaign. He’s already planning to have teenagers deliver the boxes of sheets to the secretary of state's office in Salem aboard school buses.

Meanwhile, pro-gun activists are also using ballot initiatives to protect what they see as their Second Amendment rights.

Voters in Iowa this November will decide whether to add gun rights language to their state constitution, after majority Republicans in the Legislature passed a resolution last year that got it onto the ballot, with no signature-gathering required.

Opponents said if the Iowa measure passes, courts might wind up striking down restrictions on gun background checks, permits required to carry a gun, and a ban on gun possession by people convicted of a felony.

An initiative in Nebraska, one of several there this year, would allow concealed or open-carry weapons to be carried in public places. And in Washington state, an initiative would prohibit state and local governments imposing limits on purchasing and owning firearms.