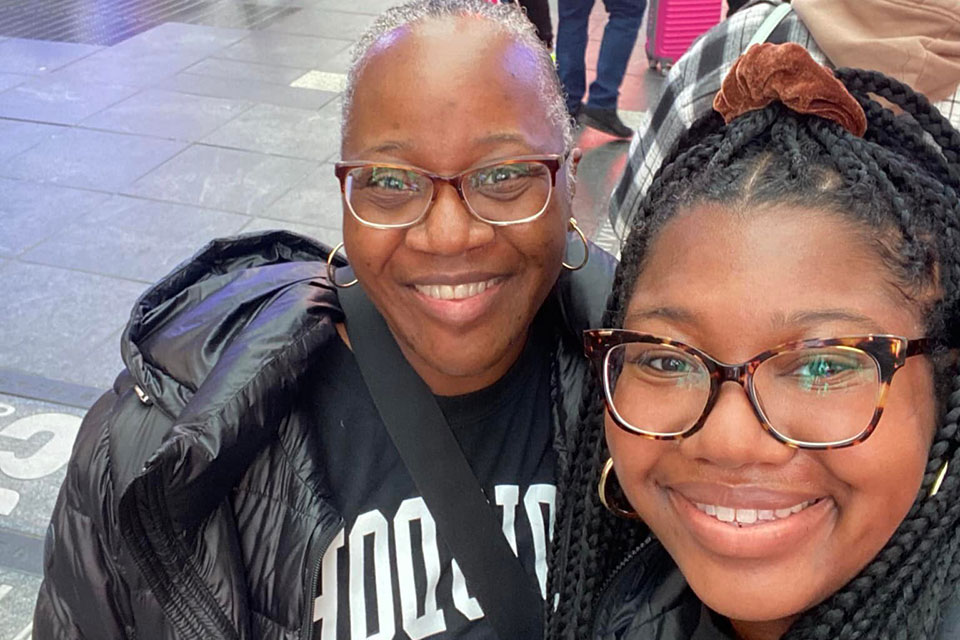 “When Black women in particular move here to Portland, there isn’t this infrastructure to get them into the community here, to answer the question ‘How do I fit in here? Where are the people at?’” Dance told The Skanner.

To that end Dance, a mental health professional, partnered with her daughter Aasha Benton, who is studying to be a social worker, to establish Mo Better Wellness, Connection and Facilitation in January.

“The reason our name is so long is because we do a lot of different things,” Dance, who currently serves as a program supervisor for Multnomah County’s Early Childhood Mental Health Program, said. “Wellness is at the forefront, but also connection.”

In May, Dance and Benton hosted a four-week pilot course to gauge interest and develop curriculum.

“So the theme of our group was ‘Relax, Reflect, Rebuild.’ For Relax, we worked on breathing and mindfulness, encouraging participants to take an inventory on how they’re feeling. Reflect, because this pilot group was over multiple weeks, was to reflect back on the week that just ended, to ask ‘Did things go well that you want to take forward in the next week?’ and then making goals by asking ‘What can I do to incorporate more of what went well, and how can I leave what didn’t go well?’ And for Refill, we asked, How are you filling yourself back up after you’re pouring out? (The exercise) was kind of like accountability to each other as well.”

Recruiting But Not Retaining

The group will also work to address what Dance sees – and what data suggests – are systemic issues within workplace culture in both local government and private businesses.

“We’ve noticed that organizations recruit and hire Black women, and there’s a revolving door that tends to happen,” Dance said. “They get into these organizations and they’re just not treated well.”

In March of last year, the City African American Network released its Black Workforce Data report, which showed that the number of Black city employees had declined from 793 in 2019 to 456 in 2021. A related Black Employee Support Survey showed that nearly half the respondents felt “tokenized” at work, and an overwhelming majority said they did not feel supported in their workplace.

“Part of what we want to do is work with organizations who want to recruit and hire us, and talk with them about, how are you building a foundation for the women you’re trying to attract? And how do you retain them? And having real conversations with them,” Dance said. “We’re not doing (diversity, equity and inclusion consulting), but we focus on equity and about how you support Black women.”

In Portland, one needn’t look far for recent, high-profile examples of Black women leaders being unceremoniously fired from supervisory positions with little to no explanation: Ruby Haughton-Pitts served two years as the head of the Oregon AARP before she was dismissed in January of last year; O'Nesha Cochran, former director of Portland's first Afro-Centric women's transition home, was in the position for only four months before she was abruptly let go with a vague explanation that she lacked leadership skills; Tricia Tillman was ousted from her position as public health director at the Multnomah County Health Department in 2017, with no explanation and despite a history of glowing performance reviews.

Dance reflected on the phenomenon: “I think part of it is, are they able to even speak to what they see happening? Is it even a safe environment? There are women who are in positions of power, and even in those positions of power, people who work under them may have more power than they do. They’re not respected as the leaders they are.”

“I’ve said this for years: I wish I could go to work everyday and just do my job.

"That’d be awesome,” Dance said. “But no, I have to deal with all the other stuff that goes with being a Black woman working in whatever environment I’m in.

“Even the job I’m in right now, I’m in a supervisor position, and I have so many conversations with people – it’s exhausting. You can’t even have a real conversation about what’s happening. You have to play it in a way that a person can receive it, that they can hear you. There’s a lot of denial. It’s exhausting. It’s really toxic. I say this all the time, other people don’t have to go through this.

“But (Black women) spend a lot of time and energy that they’re not being paid for doing all this work of trying to make things palatable for other people, or having these conversations in a way that people can hear them. There is a lot of skirting around – you don’t want to be too direct.”

Dance and Benton hope to bring these lessons to employers who are looking to not only recruit but also retain a diverse workforce.

“They can do self-evaluation at their organization, we can consult with them about that, and about how they can make this a more inviting place for Black women,” Dance said. “As part of that, we would like for them to offer our services to Black women as part of their package.”

In the meantime, Dance and Benton have been working with Micro Enterprise Services of Oregon (MESO) as they developed a vision for their business. A recent Vibrant Spaces grant from the City of Portland will enable them to hold an in-person wellness event in September.

“We want to do retreats when it’s safe to do so,” Dance said. “Eventually we want to do this in other parts of the country or even leaving the country and doing these kinds of wellness retreats.”

Some of the value in these sessions, Dance explained, is that participants can feel valued and supported regardless of where they are in developing their business.

“Sometimes women are so new in their business, they ask, ‘Do I really even have one?’ Yes, you do,” Dance said.

“It’s ok if you’re still kind of formulating it or you’re still getting it off the ground. It’s still valid.”

After two years of struggling through a pandemic, Dance said, it is helpful for women to come together and feel affirmed in their efforts.

“There are all these things that take their time – family, kids at home and trying to teach them – or they feel their business was starting to take off but then Covid happened,” Dance said. “They might be trying to start over again, and then they see ok, I’m on the right track and there are other women who are doing this, too.”

For more information about Mo Better Wellness, Connection, and Facilitation, email Dance and Benton at mobetter.wcf@gmail.com.