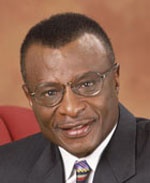 For nearly 30 years, Cornell McBride has left an undeniably profound mark on Black culture. His upstart company, M&M Enterprises, brought the world Sta Sof Fro, a line of hair care products that made a large, manageable afro possible for men and women.
"We provided something to make it bigger," he told The Skanner during a visit this week to Portland. "No products worked to (be able to comb it)."
During college in the late '60s, McBride started his company with $500. He is now running a multi-million dollar company – Design Essentials — that distributes hair care products to salons across the world.
On June 22 and 23, McBride and Novella Hamilton, owner of Design Essentials distributor Novella's Beauty Salon and Supply in Beaverton, joined about 60 stylists in Seattle for a show about new styles and practices for McBride's line of products.
Hamilton says the whole line of hair products work in conjunction with each other.
But the jump from $500 start-up to an employer of thousands didn't come overnight. McBride said it took many years of hard work and constant learning. He has always sought to better understand the market and his customers. Going and talking to the stylists who use his product – finding out both the good and bad – is essential to staying relevant and connected with the people who truly matter to a business, the customer.
Another business tip he gives freely – never say "never."
"You can't say it can't be done," he says.
He almost said that at a time his company was growing triple digits. At one time, the company was in one building. McBride could see every ounce of product available and could visualize how the company was doing. But the company soon had to expand to multiple facilities and track inventory using computers.
"I felt like I had lost control," he said. But then he had his eureka moment. If he didn't rise to the occasion, he'd likely not last long in the business world.
"I better learn things are not always going to be the same," he said.
Presently, McBride's company provides his hair products to 73 salons in the Oregon and Southwest Washington area. Hamilton says she is distributing products historically marketed exclusively to African Americans to more Whites and Hispanics – especially at salons that cater to a multicultural clientele.
Despite years of competing with larger corporate companies, McBride says small entrepreneurs can still compete in nearly every market. Creating a chemical product doesn't require a team of highly paid scientists and identifying an unmet need is essential in being successful.
"You have to change the name of the game," he said. "What can I do better than him, even though he's bigger than me?"