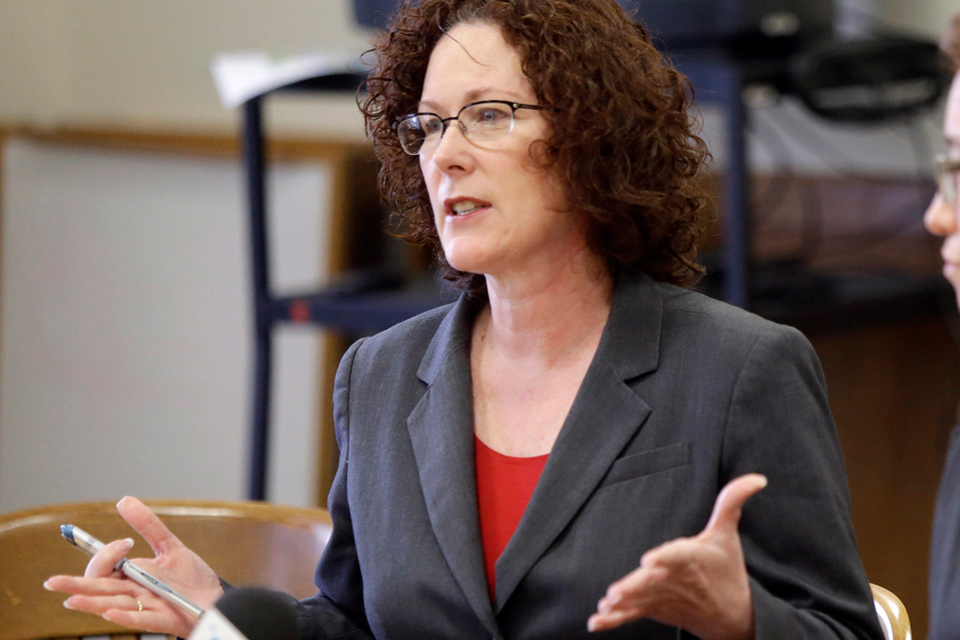 PORTLAND, Ore. (AP) — The retirement of Oregon’s longest serving congressman, Democratic U.S. Rep. Peter DeFazio, has created an open seat in the state's sprawling 4th District in the western part of the state.

While Republicans are hopeful they can win the district that spans the southern and central coasts, analysts say it may prove difficult. The 4th includes rural, conservative areas but also the more populous, liberal college towns of Eugene and Corvallis.

Voters in the 4th haven't elected a Republican to the U.S. House since 1972. New boundaries drawn after the 2020 redistricting cycle have set it up to be safer for Democrats. And the issue of abortion following the Supreme Court’s overturning of Roe v. Wade in June has energized Democratic voters.

While it is “conceivable” Republicans could flip the district for the first time in 50 years, it would be a stretch, said pollster John Horvick, senior vice president at DHM Research.

“If Val Hoyle lost that district, she would lose it in a real Republican wave,” Horvick said, referring to the Democratic candidate. “That’s a district, at least of 2022, that Democrats really should win.”

Oregon Labor Commissioner Val Hoyle is running to keep the seat blue following the retirement of DeFazio, who was first elected to the seat in 1986. Hoyle served as a Democrat in the state House from 2009 to 2017, including three years as majority leader. The state legislative district that elected her, which includes parts of the college town of Eugene and rural areas northwest of it, lies within Oregon’s 4th Congressional District.

Republican Alek Skarlatos is running his second campaign for the seat. The former member of the Oregon National Guard gained fame in 2015 after thwarting an attack by a heavily armed gunman on a train bound for Paris. The dramatic and heroic action was made into a movie by Clint Eastwood in which Skarlatos starred as himself.

Skarlatos narrowly lost to DeFazio in 2020 in the seat’s closest race in 30 years. DeFazio won by five percentage points with just 51.5% of the vote, the lowest result of his congressional career. But that was within the district’s old borders; the new maps have made it less competitive for Republicans, according to analysts.

The GOP has still invested in the district, however. The super PAC linked to House Republicans, the Congressional Leadership Fund, announced $700,000 in new ad spending there in early October, just over a month before Election Day.

In addition to inflation concerns, Republicans are seeking to capitalize on low approval ratings for President Biden and Oregon Gov. Kate Brown. Opinion polls from this April and last November found Brown to be the least popular governor in the country.

“If a Republican were to win this district it would be in a year like 2022, where Kate Brown and Democrats are hurting at the state level, and then Biden and the Democrats are kind of hurting at the national level,” said Neil O’Brian, assistant professor of political science at the University of Oregon. “But it has the potential to be less competitive than in prior years because of that redistricting.”

Largely following their national party’s playbooks this midterm cycle, Hoyle has campaigned on her pro-abortion stance while Skarlatos has zeroed in on inflation. Reproductive health care is the top priority listed on Hoyle’s website; Skarlatos doesn’t mention it on his.

Hoyle said she doesn’t think her support for abortion, which remains legal in Oregon, will hurt her with the district’s independent and conservative voters, pointing to her previous elections to the state House. She told The Associated Press that she has discussed her own experience with pregnancy loss while on the campaign trail.

“I talk about that,” Hoyle told AP in a phone interview. “Whether I’m in a conservative area, whether I’m in a rural area, I share a bit of my experience.”

Skarlatos’s campaign did not respond to AP’s interview requests. He has been endorsed by anti-abortion groups, but he recently told local media in Oregon that he wouldn't support a national ban on abortion.

“Republicans can't have it both ways,” he told KVAL. “We can't say it should be a state issue because it's not in the Constitution, but then vote to ban it federally.”

Democrats are banking on abortion remaining the chief motivator for voters, despite stubbornly high inflation and an uptick in gas prices. But there are signs the party doesn’t necessarily view the seat as a slam dunk.

The Democratic Congressional Campaign Committee has named Hoyle to its “Red to Blue” program that aims to flip seats, despite the district not being held by a Republican.

The National Republican Congressional Committee, meanwhile, has named Skarlatos one of its “young guns,” and the candidate has received over $63,000 from Take Back the House, the joint fundraising committee of House Minority Leader Kevin McCarthy.

So far, Skarlatos has outraised his Democratic opponent. The latest campaign filings show he has raised $2.6 million, more than double Hoyle’s $1.2 million.