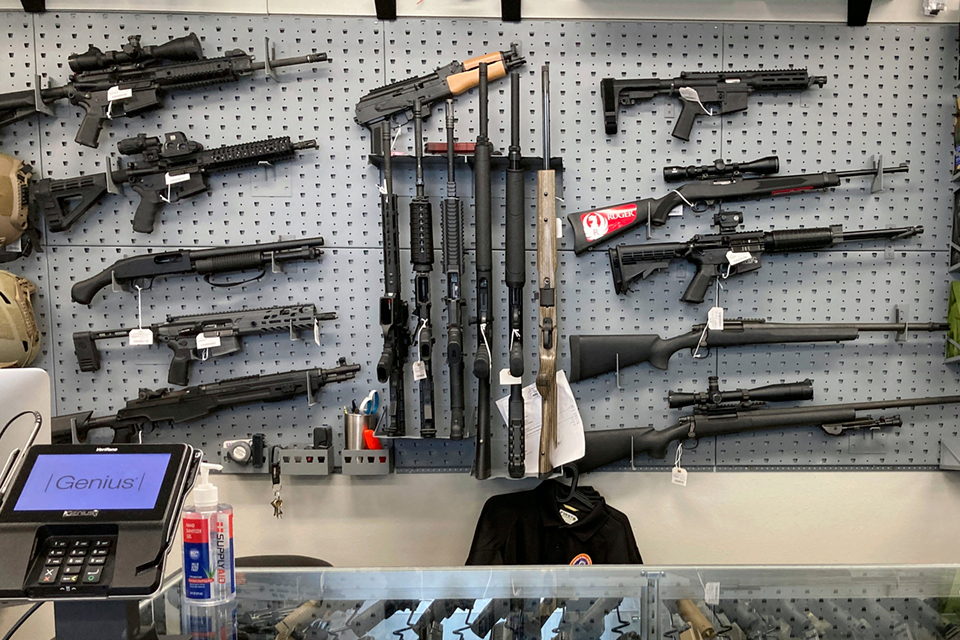 PORTLAND, Ore. (AP) — Midterm voters in Oregon narrowly passed one of the toughest gun control laws in the nation, buoying the hopes of gun control supporters, but the new permit-to-purchase mandate and ban on high-capacity magazines now faces a lawsuit that could put it on ice just days before it's set to take effect.

A federal judge in Portland will hear oral arguments Friday on whether Measure 114, which is scheduled to go into law Dec. 8, violates Americans' constitutionally protected right to bear arms. Depending on the outcome, the groundbreaking law could be delayed for months or longer as it works its way through the courts, legal experts said.

The Oregon ballot measure is part of a national trend of gun policy being decided by voters because “significant reform is stalled and that has put all the battles over gun control and gun safety at the state level,” said Adam Winkler, a constitutional law professor and expert in gun policy at the University of California, Los Angeles School of Law.

“Ballot measures are one way for people to seize the reins of policy-making. People can act for themselves to change the law and on an issue like gun safety there is a really growing and active gun safety movement in America,” he said. “That’s not something we probably would have said 20 years ago.”

Measure 114, which passed by a slim majority in November, was born out of concern about the 2018 mass shooting in Parkland, Florida and gained public momentum last spring following massacres at a grocery store in Buffalo, N.Y. and at an elementary school in Uvalde, Texas, said Mark Knutson, chairman of the interfaith Lift Every Voice Oregon campaign and pastor at Portland’s Augustana Lutheran Church.

“The arc of the moral universe is bending towards justice, and justice today is going to be ending gun violence in this country,” he said. “That’s why I trust this process will work ... and a year and a half, two years from now, it’ll be 70% of the population saying this was the right thing to do — not the 51% that passed it.”

The biggest legal flash point is a ban on magazines over 10 rounds unless they are owned by law enforcement or a military member or were owned before the measure’s passage. Those who already own high-capacity magazines can only possess them in their homes or use them at a firing range, in shooting competitions or for hunting as allowed by state law after the measure takes effect.

The law also requires gun buyers to obtain a permit to purchase a new gun. Permit applicants must take a state-approved, hands-on gun safety training course with live or dry rounds, submit a photo ID and undergo fingerprinting and a criminal background check. The state will keep a list of permit-holders that's exempt from public disclosure; the $65 permits will be good for five years and can be used to buy multiple guns in that five-year period with a fresh background check.

The lawsuit filed by the Oregon Firearms Federation, a local sheriff and a gun store owner asks the court to declare the law unconstitutional and issue an injunction to prevent it from going into effect next week. Alternatively, the plaintiffs seek a partial order on the high-capacity magazine ban.

John Kaempf, attorney for the plaintiffs, declined to comment before Friday's hearing.

Does measure 114 violate the 2nd Amendment?

His filing cites a U.S. Supreme Court ruling in June which struck down a New York law that placed limits on carrying guns outside the home. That 6-3 ruling indicated a shift in the way the nation’s high court will evaluate Second Amendment infringement claims and resulted in the court sending a similar ban on high-capacity magazines in California back to a lower court for review.

Legal experts say Oregon’s ban on high-capacity magazines will face the same scrutiny and the court will also take a close look at Oregon’s “permit to purchase” mandate to determine if the additional steps now required to gain access to firearms are also a Second Amendment violation, said Norman Williams, a constitutional law professor at Willamette University College of Law in Salem, Oregon.

While supporters of Measure 114 have cited the recent mass shootings in Colorado and Virginia as further evidence the law is needed and timely, Williams says that likely won't have much bearing on the courts' rulings in this case.

“It’s going to take the federal courts months, if not years, to sort out what parts of Measure 114 are constitutional and what parts, if any, aren’t ... and I think this is the type of measure that the U.S. Supreme Court itself might have some interest in reviewing,” he said.

“Proponents of gun safety regulations, in emphasizing the continuing gun violence in our society, are in some sense making an argument that doesn’t resonate with the federal judges considering the constitutionality of these measures.”

Details about the permit process and hands-on training are still being worked out and some local agencies have complained they don't have the budget or staff necessary to enforce the law's provisions. Several local sheriffs have said publicly they won't enforce the law in their jurisdictions.

State lawmakers are likely to advance legislation to aid the law's implementation and provide funding in the upcoming session, said Elizabeth McKanna, chair of the Measure 114 legislative committee.

The uncertainty around Measure 114's future has driven a surge in firearms sales that began after it passed as gun owners worry they might not be able to obtain a new permit for weeks or months if some or all of it goes into effect.

As of this week, Oregon State Police had more than 35,000 pending background check transactions for gun purchases and was averaging 3,000 requests a day compared to less than 900 a day the week before Measure 114 passed, according to agency data. On Black Friday, the agency received 6,000 background check requests alone, OSP Capt. Kyle Kennedy said in an email.

Shaun Lacasse, vice president of The Gun Room Inc., said the increase in background checks reflects the increase in gun sales he's seen at his store in response to anxiety about the impacts of the new law.

“How long is it going to take for all of that system to get started and be implemented? It’s going to be months — many many months — before the first permits are even going to be able to be issued,” said Lacasse, who said sales at his Portland business have at least quadrupled since the law passed.

“We don’t how long we’re going to have to be in purgatory until this is all sorted out.”