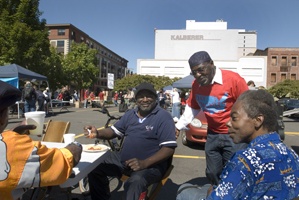 After serving 525 hungry people in downtown Portland Sunday, Derek Rasheed and other Muslim volunteers could finally go home and eat. Despite the smells of grilled chicken and vegetables, all of those serving food Sunday were abstaining from eating in observance of the holy month of Ramadan.

Every year, during the month of Ramadan, Muslims across the nation come together and feed the homeless and hungry. This Day of Dignity, organized nationally by Islamic Relief USA, provided food and other services to those in need in 18 cities across America.

Rasheed says they handed out hygiene kits, performed health screenings and even cut hair. There were nearly 200 people lined up before noon, all waiting for some food. There were men, women, children, young and old, wheelchair bound – everyone of them in need of a warm meal. With grills from the Horn of Africa restaurant, the volunteers handed out freshly cooked chicken, cabbage, rice, apples and other delights.

Although the Day of Dignity only lasts once a year, Rasheed wants to see his Muslim community do it a lot more often. He wants to organize quarterly, then monthly feedings. Eventually he'd like to see daily feedings of people that are just like many of us.

"We're just a paycheck away from being just like them," he said.

Rasheed has worked in Oregon state prisons since 2001 as a counselor and chaplain, serving as a mentor to inmates and helping them reintegrate back into society upon their release. He is also a founder of Oregon Islamic Chaplains, which certifies Muslim chaplains through its National Islamic Chaplain College to work in prisons, hospitals and the military.

In addition to filling the bellies of the hungry during a month of daytime fasting, Rasheed says it helps to show the community see the compassionate and caring side of Islam – instead of the violent and despotic elements of the religion often seen on television.

"Islam has a real black eye," he said. "This shows the real reality of what Islam is all about."