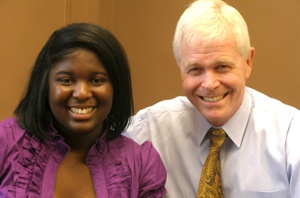 Shantel Monk is a 17-year-old foster child, the eldest of four children born to a teen mom with drug and alcohol problems.  Joe Halloran is a cancer patient, only alive because of a stem cell transplant, who will  need medical care for the rest of his life.
Victims? Not so you'd notice.
An ambitious and determined scholar, Monk is about to interview at two top-flight universities: Stanford and Loyola Marymount. With her eyes fixed on a career in business, she is determined to help other foster children succeed.
"I want to study business and get a master's degree so I can start a program that will help foster children and children in poverty have a chance to succeed," she says about her ambitions. "I want to show my brother and sisters that we don't have to live the life our family has lived – because no one in our family has finished 12th grade. We can have a bright future."
In the meantime, she's raising money for blood cancer research – in honor of her revered chemistry teacher, Joe Halloran.
As for the 58-year-old Halloran, after a successful career as a sales manager in Chicago, he's now doing what he says he always wanted to do: teaching chemistry at De La Salle North Catholic High School, where he helps disadvantaged young people achieve their college dreams.
"The type of kids I wanted to work with were the ones who are accustomed to getting the short end of the stick," he says. "That's why I work here and I'd never leave it. When I retire I'll be walking out of this front door."
Halloran was diagnosed with non-Hodgkins lymphoma, a form of blood cancer in 1998. A lump on his neck turned out to be a type of slow-growing cancer that doesn't respond to treatment. So for three years doctors simply watched and waited.
Then in 2001, the cancer became more virulent – and treatable. The teacher embarked upon a series of treatments at OHSU hospital that included bone marrow and stem cell transplants. After the bone marrow transplant, Halloran's cancer returned in just five weeks.
Luckily, he said, one of his five brothers was a compatible donor, and new medical treatments meant that doctors could extract stem cells from his blood and transfuse them directly into Halloran's blood stream.
"You look up at this little bag, and you think this is it – this is what my life depends on," Halloran said.
Through De La Salle's acclaimed internship program, Monk works at OHSU's transplant clinic once a week, gaining work experience as she earns money that helps support the private high school. At first, she said, she was shocked by the illness that patients, including her teacher, had to endure.
"At first it was really hard," she said. "It was so sad to see patients looking healthy one day and the next day looking really sick.
"But as the years went by I felt I really was helping them. I love my job now and I wouldn't trade it. It makes you grow up."
Blood cancers like leukemia and lymphoma kill about 53,000 people each year. They make up more than 9 percent of all new cancer cases. One of the most deadly blood cancers, myeloma, has a survival rate of just 34 percent and is twice as common in African Americans than for other races. It tends to strike people over 70 and affects more men than women.
Monk's admiration for Halloran grew when she took his chemistry class. "I call him my soldier because he's so strong," she said. "He's very supportive. He stays until six or seven o'clock at night supporting students – and he never complains."
Inspired by Halloran's courage, Monk wanted to honor her teacher by raising money for lymphoma research. She aimed to participate in The Leukemia and Lymphoma Society's annual fundraiser, a sponsored walk called "Light The Night," that will take place on Oct. 3, at Portland World Trade Center Plaza.
But a car accident last year led to knee surgery so she is unable to walk. No matter. She decided to raise money anyway. Now she is collecting donations for the society and planning two fundraisers:  a dance at the Matt Dishman Community Center, which will take place sometime in Decembe, and a political debate she is organizing under the umbrella of the Multnomah Youth Commission. So far she has raised $125 and counting.
Halloran has had several setbacks. As well as the transplants, he's had several other operations for cancer. He also had a heart attack last year, but was brought back to life with a defibrillator, after collapsing at his health club. And he still has to go to transplant clinic every month to get treatment.
"It is one of those things where you find yourself asking a lot of questions," he says of his survival against the odds. "I'm just really grateful that I had the chance to do what I wanted to do, which is teach."

Donate to the Leukemia and Lymphoma Society through Shantel Monk at www.active.com/donate/ltnPortla/2366_shantelmonk
by calling 503-453-4442 or email her at shantelmonk@yahoo.com
Contact De La Salle North High School at 503-285-9385 or online at www.delasallenorth.org