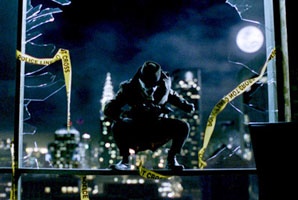 It's hard to imagine how Hollywood in 2009 could possibly continue to crank out such satisfying, comic book hero adventures one after another as it did in 2008, a year when we were treated to a quartet of outstanding offerings, including Iron Man, The Amazing Hulk, Wanted and The Dark Knight. Unfortunately, that impressive string comes to an abrupt end with the release of the Watchmen, an underwhelming splatter flick bound to be as well remembered for its casual display of male genitalia as for its ubiquitous gore.

Based on the popular DC Comics series of the same name, this eagerly-anticipated adaptation was directed by Zach Snyder, who had followed his spellbinding debut, Dawn of the Dead, with an equally-compelling sophomore effort, the critically-acclaimed 300. Here, however, he takes a giant step backwards with an overambitious production plagued by a plethora of characters and a convoluted plotline that takes almost three hours to introduce, thicken and resolve tidily.

Part of the confusion comes from the backdrop of the story, which is set in 1985 in an alternate reality where Richard Nixon is still president. Furthermore, America and the U.S.S.R. are at odds and teetering on the brink of mutual nuclear annihilation.

The point of departure is the mysterious murder of The Comedian (Jeffrey Dean Morgan), a retired member of the Watchmen, a confederation of superheroes who once worked for the U.S. government. His body is discovered by Rorschach (Jackie Earle Haley), a former colleague who sports a mask with a constantly changing symmetrical ink blot. Rorschach decides its time to reassemble the old gang in order to get to the bottom of the crime, unaware that this endeavor will, in turn, embroil them in a subplot to save the planet from extinction.

Most notable among the motley crew coming out of mothballs are brainiac Ozymandias (Matthew Goode); techno-wiz Nite Owl II (Patrick Wilson); curvy Silk Spectre II (Malin Ackerman); her lover Dr. Manhattan (Billy Crudup); and her mother, Silk Spectre (Carla Gugino). One can't help but notice two things about the scene-stealing Manhattan: that he's blue, and that he's always naked. And the latter distraction tends to overshadow his amazing superhuman ability to bend matter with his mind, the result of the proverbial exposure to radiation in a lab accident. For, whenever the camera shoots him below the waist, we're treated to the shocking sight of his dangling family jewels in all their glory.

Equally jaw-dropping is director Snyder's tendency to up the ante in terms of gratuitous violence. For instance, in the comic book, Rorschach killed a kidnapper simply by handcuffing him to a pipe, setting the house on fire, and calmly walking out. But in the screen version, Rorschach has inexplicably morphed into a sadistic vigilante who takes glee in hacking away at the same sicko's head with the cleaver.

A morally-ambiguous parable designed to tap into homoerotic urges while satiating the bloodlust of the sanguine, post-Pavlovian Cyber Generation.

To see a trailer for Watchmen, visit: http://www.youtube.com/watch?v=gRMjr1UKa5k