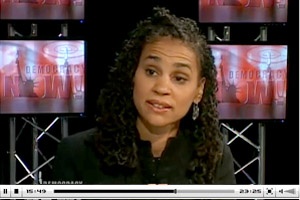 This weekend, AIG said it would pay $450 million in bonuses despite receiving a $173 billion bailout that's given the US government an 80 percent stake. On Monday, the Treasury said it would withhold $165 million from the next installment of AIG's taxpayer money.
The AIG controversy is the latest to exemplify the near-unfettered flow of government money to corporations that helped cause the financial crisis. As AIG uses the bailout to hand out bonuses, a new report says people of color continue to bear the heaviest burden in the current economic recession. According to the Center for Social Inclusion, communities of color continue to be disproportionately deprived of infrastructure spending, job creation and other key government services. The report's authors call for the government to use some of the billions in federal stimulus money to focus on the needs of communities of color.
The report is called "One Region: Promoting Prosperity Across Race."


CSI Director Maya Wiley was interviewed on the issue yesterday on Democracy Now! With Amy Goodman.
To watch the interview click here:
http://www.democracynow.org/2009/3/17/report_communities_of_color_bear_heaviest