In a city where Black immigrants and Black natives are all too often divided by culture and language, a common problem is helping to unite them.
Members of the African Women's Coalition are mourning the loss of Nabintou Kelekele, a mother of five children who was brutally murdered on March 16. Her husband Namegabe Mushegero has been charged with murder for allegedly hitting her in the head with a hammer. The coalition is creating a domestic violence plan of action to prevent future tragedies from happening.
Leaders from the African American community helped lead a discussion last week and have committed to provide training and mentorship. 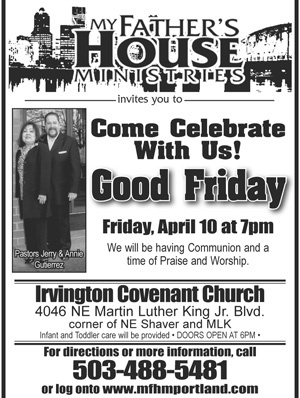 A memorial fund has been set up for Kelekele's family to cover the costs of the funeral. Anyone wishing to donate money can go by any Bank of America and ask to deposit in the "Nabintou Kalamba Memorial Fund." The account was established under Nabintou's maiden name. A funeral will be held on Thursday, March 26 at 1 p.m. at Riverview Cemetery, 300 SW Taylor Ferry Rd.
The Thursday night meeting, convened by AWC's Executive Director Evelyne Ello-Hart, was a diverse group, including women and men from all over the African continent. People packing the meeting room at the Center for Intercultural Organizing, offered stories about Kelekele, of violence that affected their personal lives and tried to put forth solutions to help women trapped in violent situations.
"Many of us left Africa because of war, because of difficulties, we thought we'd come to America to have a better life, to have hope," said Lucy Tsimange in French, translated by Ello-Hart. "Can you imagine escaping death in Africa, running away from death in Africa, only to come to America to meet death?"
African Americans Renee Mitchell and Vanessa Timmons helped facilitate the gathering and have committed to start training sessions. Mitchell is founder of Healing Roots and survivor of an abusive relationship; Timmons has been a domestic violence advocate for over 20 years.
"Beyond our heritage that makes us join together as women in particular," Mitchell said. "is that we are strong, but sometimes our strength prevents us from acknowledging that we are hurting, that we are in pain and that we are going through something that is very difficult."
Pride can sometimes get in the way of knowing when to ask for help, she said.
"We have this myth called the Strong Black Woman," she said. "You have it in Africa, you have it in America. It sometimes prevents us from seeking help."
Ello-Hart said Kelekele was a well-known and well-liked member of the AWC who cared for her many children while working three jobs. Many of the women attempted to help Kelekele get out of the abusive relationship. Fidelie Paguy stood up and said the final attack shouldn't have even happened.
"She came to many of us," she said. "I can't believe I didn't call the police. Two weeks ago, she was supposed to leave."
But as Mitchell and others pointed out, the act of leaving is often the most dangerous time.
"You never tell him you are leaving him," said Rose Ngando. She said she left Kenya because of an extremely abusive relationship, and was only able to leave when her husband left town on business. She was out of the country for nearly a month before he found out.
"In Kenya, if you go to the police and say my husband beat me, they ask, 'What did you do?,'" Ngando said.
Joyce Harris, of the African American Alliance, said "I want you sisters from the continent to know you are our sisters. When I heard about this, it just hit me. It reminded me of a sister who was in an abusive situation. And we saved her, but it took all of us. We had to do things like find her safe housing, and we had to transport her twice a day to work."
Harris said no one should blame themselves for Kelekele's death.
"For those of you who knew (Nabintou)," she said. "don't beat yourself up about what you could have done, it really takes all of us."

Connecting Communities
One of the most amazing aspects of the meeting, says Ello-Hart, is that African American women facilitated, shared their experiences and listened to African women.
"We live in the same city, but we don't cross often," she said. "How often do you see us together?"
In the past, cultural and language differences have stood in the way of helping African women gain services. Ello-Hart says many shelters isolate African immigrant women from their communities and inadvertently force women back into the hands of their abusers. In her native Cote d'Ivoire, if a woman was beaten by her husband, she would seek shelter with members of her family, who would then negotiate with the husband's family for restitution. Until restitution was paid, husband and wife would not live together. If a second beating occurred, it would be grounds for immediate divorce.
Mitchell says Africans and African Americans have much more in common than one might think. The current system of social isolation and seeking help in shelters isn't working for either group.
"In a culture where relationships are so important," she said. "It's important to be around people who look like you and think like you."
Tragedy isn't the only thing bringing together the two communities. Ello-Hart is also starting a cross-cultural relationship program that will pair 10 African Americans and 10 Africans for six months. Spots are still available.
Keeping her eye on the ball, Ello-Hart says she is bringing men together, bringing women together and trying to keep the immigrant and refugee community strong.
"This meeting was just the beginning," she said.

Spring Break: Young Women's Conference to Hold Open Mic Friday
The Spring Break Leadership Conference for Young Women, hosted by Renee Mitchell, was held this week at the Urban Bridges Studio, 1465 NE Prescott St.
The conference culminates in an open mic session at In Other Words book store, 8 N.E. Killingsworth, from 1 to 3 p.m. The session will allow many girls to present things they've learned during the week-long free conference.
The conference helped to teach girls to handle conflicts; Linda Hornbuckle lead a media literacy session about the way images and songs impact people; and girls learned to set goals and build their creative, financial and speaking skills.