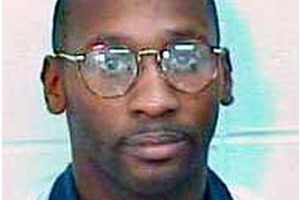 (NNPA) - Georgia Death Row inmate Troy Davis' 30-day stay of execution has expired and his defense team has filed a final appeal requesting that the U.S. Supreme Court send his case back to a lower court to allow a judge to review recanted testimonies by several critical witnesses who testified for the state in 1991.
If the Supreme Court rejects this appeal, a new execution date could be set in the months to come.
"Troy is in good spirits although he is worried about what his family is going through. He told me to keep on fighting so that is what we will do," said Martina Correia, his sister, to The Final Call.
"He has not lost faith and we are continuing to press forward to expose this corrupted judicial system in Georgia. He and (we) all of us thank newspapers like The Final Call for continuing to print the truth about his case," she said.
Correia and supporters are encouraging citizens to write their state officials to request a new trial for her brother. Letters are being fired off to President Obama and U.S. Attorney General Eric Holder asking them to "investigate the judicial misconduct that has taken place in this case. We need them to intervene," she said.
The final appeal on Davis' behalf was filed on May 19 and one day later 27 former judges, prosecutors, and justices signed and filed a friend-of-the-court brief requesting that the Supreme Court allow Davis' claims of innocence be presented.
"To allow Davis' execution without appropriate legal review is a plain constitutional injustice," the filing said.
Among those signing the supporting brief were former Deputy U.S. Attorney General Larry Thompson; nine former U.S. attorneys; two former state Supreme Court chief justices; former state attorneys general from Florida and New Jersey; and three former judges from the federal appeals court in Philadelphia.
"This filing is major because it is mostly conservatives speaking out against this injustice," said Ms. Correia. "The world is watching and looking at who is backing my brother."
Witnesses claimed Davis, who was then 19-years-old, and two others were harassing a homeless man in the parking lot of a Burger King restaurant when an off-duty officer arrived to help the man. Witnesses also testified at trial that Davis then shot the officer twice and fled the scene.
Since Davis' 1991 conviction, seven of the nine witnesses against him have recanted their testimony and no physical evidence has been presented that links Davis to the killing. Many were on parole or probation at the time and have said they felt intimidated by police to name Davis as the killer. One of the two witnesses who has not recanted is suspected by many of being the actual killer.
In a 2-1 decision in April, the federal appeals court in Atlanta rejected Davis' request for an evidentiary hearing. The court, which had postponed Davis' execution, extended the stay for 30 days.
Also on May 19 participants from all 50 states and 32 countries around the world took part in the Global Day of Action to call further attention to the case. Thousands of people attended rallies, prayer vigils, and forums for Davis, who has been on death row for nearly two decades.
"Another thing we are demanding is that the correctional officials allow Troy access to the media. What are they afraid of if he is guilty?" asked Correia. "They don't want him talking to the press because they know he is innocent. Let's fight on."