Producer Will Walk 500 Miles with Veterans for PTSD Documentary 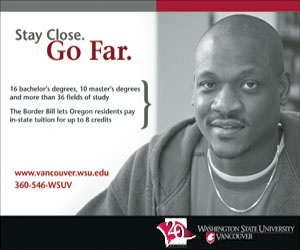 (SALEM, Ore.) - An Oregon Video Producer will walk five hundred miles with fellow Veterans to raise money for the production of a television documentary about PTSD- Post Traumatic Stress Disorder. Tim King has covered the wars in Iraq and Afghanistan for Salem-News.com and Oregon FOX-12.

In his footage from the wars, there are interviews with Americans in combat zones who about PTSD while still fighting the war.

King says they reveal candid information that would be very useful in helping understand this complex disorder.

"I spent time in Iraq last summer interviewing soldiers and Marines in different parts of the country about PTSD, asking what they are doing to prevent it from being a problem later in their lives. The interviews are very revealing."

"Over time, I have gained contact with groups and individuals who have developed therapies and general ways to better deal with and live with Post Traumatic Stress. They span the nation dealing with a range of veterans, from WWII to today's conflicts, to those who never wore a uniform at all. This large and diverse group is who the program is for, and it is also for their families."

He says PTSD therapies range from standard programs that involve art, group meetings and veteran-related humanitarian projects, to things like fishing and surfing and other activities specifically geared toward helping veterans adjus back to civilian life while discovering or in some case, re-discovering, activities that allow a new and better focus.

"It is important to note that PTSD is not exclusively something that affects people who served in combat. Sex abuse survivors, people who were in terrible car crashes, people who witnessed domestic abuse, people in abusive relationships, the list goes on and on," King said.

He says efforts at securing financial backing have been a slow go. The pace of the economy does not help any project of this nature, yet he stresses that this should already be on the air and in libraries, and of course on the Internet.

"I admit that when we first decided to produce an hour long documentary on Post Traumatic Stress Disorder, we thought it would be so widely supported that the actual production would be a piece of cake. I was wrong. Companies that make literally billions off the wars overseas, won't so much as return a call to this producer."

"So I have another, much better idea. I am going to march 500 miles with fellow veterans to raise support for this important program. We don't need big corporate funding anyway, we just need more heart and soul, which is where this whole effort begins anyway."

He says the goal of the march is to generate sufficient funding for the documentary, so his crew doesn't have to cut corners.

King said, "We don't want to see this important program, which will serve as an educational tool, be a nickel and dime project. Veterans deserve more than that."

The first PBS documentary that Tim and his wife Bonnie produced took three years to complete and they funded it themselves. That was the story of the sole survivor in a B-17 bomber crash on Oregon's Cape Lookout in 1943.

King located two of the men involved in his rescue half a century earlier, and introduced them on camera. The program aired twice on Oregon Public Broadcasting in 1993. It was titled \"Fallen Fortress at Cape Lookout".

"With this documentary, we keep thinking that a group or business concerned with the welfare of veterans would want to have their name on a documentary about PTSD that will be seen by millions of people for years while saving the lives of our American combat veterans."

Instead he says, he will rely on donations at a whole lineup of fire departments, police and sheriff departments, churches, Veterans organizations, and anywhere else people collect donations.

King says one fun part is that they will go live on Justin.tv, and keep the signal in front of people on as many social networking sites as possible. That means Twitter, MySpace, Facebook and YouTube.

"It is going to be an adventure and we will spread awareness and education about Post Traumatic Stress Disorder the whole way, roughly from the Portland area to somewhere near San Francisco.\"

Experts like Dr. Phil Leveque in Molalla, Oregon, say PTSD is a lifetime disorder. A Professor of Physiology and Pharmacology and a retired Physician, he is also one of the only Forensic Toxicologists in America. King says he probably knows more about PTSD from the perspective of a sufferer and doctor than any other living person.

The VA on the other hand, is using right-leaning experts like Dr. Sally Satel of the American Enterprise Institute, to rewrite the VA's policies so doctors and therapists, "don't reach too quickly for the permanent disability form". Their job right now is to downplay PTSD, Satel says "PTSD is not a permanent problem for veterans."

Dr. Leveque and several other PTSD combat vets associated with Salem-News.com, say that is \"hogwash.\"

Unfortunately, many Veterans today see people like Satel and other operatives at high levels basically as the enemy. Satel is a medical doctor and psychiatrist, but Dr. Leveque says many people making decisions about the welfare of Veterans in the government system are unqualified to begin with.

"Yet they make decisions to setback the needs of veterans all day, every day, in every state," Leveque said.

King said, "From the policy influencing Satel, to the people handling actual claims at the VA, there is only one bottom line: they are denying Veteran's claims to save the government money. Uncle Sam gave it all away to Haliburton and now the people who fought the wars get to pay the price."

What King says is ironic, is the way American people have welcomed these new combat veterans home, and grown increasingly sensitive to the needs of veterans over time, as the very government that sent them increasingly denies their problems, starting with PTSD at the head of the list.

"The American people are standing up, but the nation itself, the government, is all too often just a big sad depressing joke. The fallout from that is a Veteran's suicide rate that is an absolute shame to our nation, not the Vets who served it."

King continued, "The VA will always be the agency in charge of the life and decisions for veterans, but there is a lot that we can do also. We can save lives by providing answers to questions that go too long without replies."

He says their goal; the underlying theme of the documentary, will be complete and total honesty and transparency about PTSD.

"We have nothing to lose by offering the real information. The VA however does, and it is a loose train on the tracks that all to many Veterans have no chance of climbing aboard. Veterans do not ask for PTSD. They don't seek terrible memories that cause ongoing nightmares. Many become abusive toward their spouses after being immersed in combat for too long."

He cites how so many go back again and again and again. Experts like Dr. Leveque say no human being can be assigned more than two combat tours without the potential for big problems. Many people keep them bottled up, some effectively, some not. King says the program will be clear and functional, motivating and reassuring.

"My wife tells me this sounds angry, and I can not deny that. The anger has nothing to do with the documentary, it is a reaction to the suffering of my brother and sister veterans that bothers me. I'm putting a lot of hours into researching our current casualties and the numbers are up as everyone knows in Afghanistan. I feel we have an important effort on our hands, one worth walking a lot more than 500 miles."

The documentary's tentative time for completion is November 2009, not that far away.

King says he will release more details about the 500 Mile March for PTSD in the coming weeks.

"We are actively gathering interviews for the program right now and will be visiting a number of points on the west coast in August (by car) to record more interviews and gather footage of therapy programs. The walk will take place in September. We will be walking from Oregon to California, with exact departure and arrival points unknown at this time."

He says it will be an event to remember. The funds raised will be used among other things, to pay for music, voice talent and production, as well as travel to other parts of the country not on the west coast.

\"We will be live on Twitter, MySpace, Facebook and Justin.tv when signals allow. Veterans and non veterans can participate in the entire walk which I will personally do, or they can walk a mile or less. We will visit Veteran's Halls, Fire and Police Departments, churches, City Halls, and make other stops to collect donations."

Media in each community they pass through will have ample notice of the 500-Mile March's pending arrival. National media will be notified and provided footage and images and story content from the march, the same goes for local media outlets.

King says he wants the 500 Mile March to be far more than a fundraiser.
"It will be a fantastic way to raise awareness about PTSD, and we would like to have pamphlets and other material to hand out along the way. We will also give coverage to the people and businesses and agencies that help us. We anticipate that the march will generate sufficient funds to cover this documentary and also give something to other groups that work to help Vets and PTSD like IraqWarHeroes.org and others."

King laughed as he said, "Then of course, the 500 Mile March would probably make a good documentary also, but we will keep things in order, one step at a time."