Racism Shapes Black Women's Health Care from the Inside Out

A new study by Oregon Health and Sciences University shows that unique barriers are hurting African American women's ability to heal from a range of life crises.
The report, published online in the American Journal of Public Health, also shows that racism is hampering the ability of White mental health providers to help even where those professionals are genuinely engaged and compassionate.
The study is the culmination of five years of work on the part of community advocates, service providers, focus groups and doctors at OHSU, including Vanessa Timmons of the Oregon Coalition Against Domestic and Sexual Violence; Mary Jo Thomas, from the Multnomah County Department of Mental Health and Addiction; life coach A. Star Waters and women's advocate S. Renee Mitchell.
Also part of the team are Stephanie Wahab of the Portland State University School of Social Work; Angie Mejia, OHSU Department of Medicine; and OHSU associate professor of medicine Christina Nicolaidis.
"The thing that surprised us the most in the research was how the 'myth of the strong Black woman' actually became a barrier to women suffering from depression," Nicolaidis said. "Women felt that they couldn't go out and find help because it was not the thing for a strong woman to do."
Mitchell, an artist, activist and family advocate, said the process of participating with so many women has transformed herself and changed the community forever.
"It's a community-based participatory project, so we involved folks from the community on focus groups, gathering and interpreting the data, deciding what were the right questions that should be asked," Mitchell said. 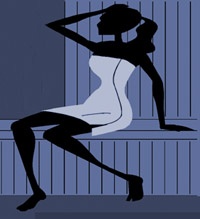 Founder of the Healing Roots Center and Twisted Healing Sistahs, and producer of new annual events such as Redefining the Blues, Mitchell said she has been moved to examine the unmet needs of area families.
"The most exciting thing for me is that the work we've done has opened the door for Redefining the Blues II and having Avel (Gordly) come out and talk about her situation, and talk about Post Traumatic Slavery Syndrome (a lecture last year by historian Joy De Gruy) and how that's affected Black women in particular.
"It has created a legacy and it has raised the volume on a conversation we weren't even having before," Mitchell said. "Once it ends, we are still building on, and doing, this work."
Nicolaidis said the report has important information not just for Black women but for everyone who serves the community.
"I think it's important for health care providers to understand that race may be playing an important role in their patients' issues whether or not they see it," she said.
"A lot of us may not see ourselves as racist but it's important to for us to see the impact racism has on mental and physical health."
Study participants were asked about their experiences and beliefs surrounding the relationship between violence and health in general, mental health, depression, and depression treatments. They also were asked to discuss their recommendations for improving depression care. The researchers found one issue dominated discussions about depression care — the participants' deep mistrust of what they perceived to be a "White" health care system.
"These women were extremely wary of most depression treatments and providers they associated with 'White' systems of care. Although they acknowledged that violence, depression and substance abuse adversely affected their health, discussions about health care revolved around their perceptions of racism," said Nicolaidis
"Based on our findings, we recommend health and mental health providers endeavor to better understand and acknowledge how racism informs the experiences and perceptions of their patients."
You can reach the OHSU Avel Gordley Center for Healing, 621 SW Alder at 503-494-4745; and the Healing Roots Center, 5432 N. Albina, at 503-595-9591.