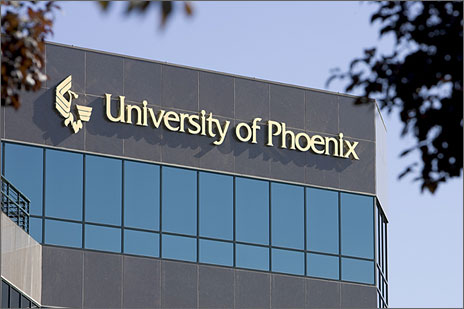 NEW YORK (AP) -- The government is moving forward with its crackdown on the country's for-profit schools, aiming to protect students from taking on too much debt to attend schools that do nothing for their job prospects.

But the final version of the Department of Education's rule, released Thursday, is much softer than its original incarnation. It gives schools more time to correct deficiencies and makes it likely that fewer will lose access to federal student aid dollars. The news sent education stocks soaring in morning trading, with companies that analysts had considered most at risk of having to shut down programs or change them significantly - like Corinthian Colleges Inc. and Education Management Corp. - each gaining more than 25 percent.

Shares of the nation's largest chain, Apollo Group Inc., which owns the University of Phoenix, rose 13 percent. DeVry was up 11 percent and the Washington Post Co., which owns the Kaplan school chain, rose 6 percent.

Nearly 18 months after negotiations began on how to define "gainful employment," the DOE has released conditions that for-profit schools must meet in order to access federal financial aid dollars. If graduates owe too much relative to their income, or too few former students are paying back their tuition loans on time, schools stand to lose access to Pell grants and federal student aid. Such a loss would seriously crimp schools' ability to attract students.

"These new regulations will help ensure that students at these schools are getting what they pay for: Solid preparation for a good job," Secretary of Education Arne Duncan said Thursday. "We're giving career colleges every opportunity to reform themselves but we're not letting them off the hook, because too many vulnerable students are being hurt."

Most students at career colleges and vocational schools pay tuition with federal financial aid dollars - as much as 90 percent of a school's revenue can come from government aid. But that leaves taxpayers on the hook if students can't find good jobs and default on their loans.

And they are defaulting in large numbers.

Students at for-profit institutions such as technical programs and culinary schools represent just 12 percent of all higher education students but 46 percent of all student loan dollars in default. The average student earning an associate degree at a for-profit school carries $14,000 in federal loan debt versus the $0 debt burden of most community college students.

Government scrutiny of the industry grew as the Great Recession exacerbated students' debt burdens. The DOE last fall created rules to rein in deceptive advertising and barred schools from paying enrollment counselors based on how many students they signed up, among other measures. The agency drew up the "gainful employment" rule in 2010, but delayed putting it into effect as it faced heavy lobbying from schools and politicians.

Under final terms of the law, announced Thursday, schools will only be able to receive federal-paid tuition if at least 35 percent of its former students are repaying their loans. Or, the estimated annual loan payment of a typical graduate must not be bigger than 30 percent of his or her discretionary income, or 12 percent of his or her total earnings.

Many maintain that the rule will protect students from toxic programs.

"The Department of Education's gainful employment rule is a modest and important first step to protect students and taxpayers from subprime academic programs that have a demonstrated track record of failure," said Sen. Tom Harkin, D-Iowa, who's chaired a series of hearings critical of the for-profit sector.

"The only programs that would lose funding would be programs that are consistently failing to provide students with gainful employment, and are providing them with insurmountable debt," adds Pauline Abernathy of the Institute for College Access & Success, an education advocacy group that favors more industry regulation.

Others, including the National Black Chamber of Commerce and the Hispanic Leadership Fund, have said the new federal rule could hurt minority and low-income students by eliminating important funding options and therefore reducing the number of schools they can afford to attend. Congressman John Kline, R-Minn., filed an amendment in February to try to cut DOE funding in order to stop the rule from being enacted. Harris Miller, the president of Association of Private Sector Colleges and Universities, an industry group, has said the rule has "fundamental legal flaws" because the DOE is "engaging in a form of price fixing," which it doesn't have the authority to do.

The lobbying seems to have worked. Analysts say the rule is more lenient than they and most investors had expected - "meaningfully watered down," according to R.W. Baird's Amy Junker. Under the rule's original terms, programs that failed to meet the criteria would have lost federal loan eligibility immediately and enrollment would have been frozen at any school in danger of failing. The finalized rule gives schools multiple chances over a four-year period to improve their stats. After "three strikes," a school would lose eligibility for three years.

"We're focusing on improving (for-profit programs) rather than closing them. Students would be better off if their programs were stronger rather than closed down," said James Kvaal, a DOE official, during a conference call with reporters.

The DOE said it expects 18 percent of for-profit schools' programs to fail its tests at some point, and 5 percent of programs to lose eligibility under the new law.

There's a lot at stake for the schools and their investors, who have benefitted from the surge in for-profit programs hitting the market in the last decade. The country's largest chain, Apollo Group, has seen revenue and net income grow about eightfold since 2000. And despite the hit that the sector has taken from increased regulatory scrutiny, Apollo's stock has more than quadrupled in that time.

But BMO Capital Markets analyst Jeff Silber sees profits declining or stagnating at most for-profit schools over the next few years. New enrollments are dropping sharply after years of double-digit growth as the schools adjust their businesses to accommodate the government's stricter oversight.

Some schools have been trying to get out in front of the new laws and adapt their business models to the new reality. Apollo's University of Phoenix, for example, now offers a free, three-week orientation that helps weed out unprepared students without charging them. The Washington Post Co.'s Kaplan education division has also put in place a free trial period so students can see if they really want to commit to school. Career Education Corp. is making new online undergraduate students pass a college prep course if they haven't attended college before - if they can't do the work, they can drop out without paying tuition.

University of Phoenix spokesperson Rick Castellano and Kaplan spokesperson Mark Harrad said they had no comment yet on the new regulations.