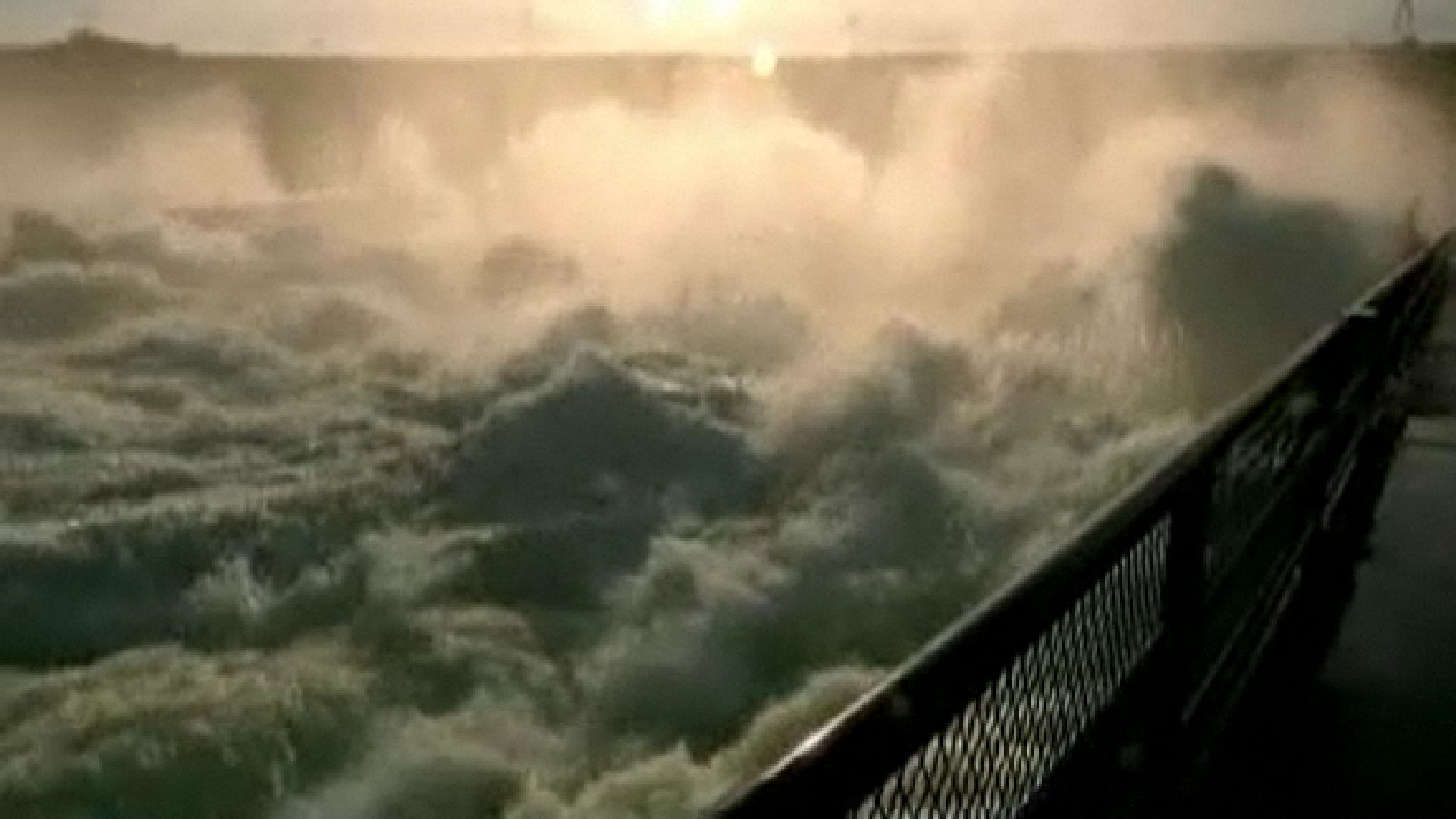 HAMBURG, Iowa (AP) -- Crews are trying to beat floodwaters expected to arrive in Hamburg on Tuesday by building up a secondary barrier to protect the small Iowa town after the swollen Missouri River punched a massive hole in the main levee.

The river ruptured two levees in northwest Missouri on Monday, sending torrents of water over rural farmland toward Hamburg in southwest Iowa and a Missouri resort community downriver. By Wednesday, water spilling through a nearly 300-foot hole in the levee near Hamburg was expected to top a secondary levee built last week to protect the town.

The Army Corps of Engineers said crews are working to increase that wall's height by 3 feet. If it breaks, parts of Hamburg could be under as much as 10 feet of standing water, officials said.

"For right now, we believe we'll be able to get that elevation raised in the time available as that water flows across in the next 48 hours," Col. Bob Ruch, the corps' Omaha District commander, said Monday evening. "We've had excellent working conditions."

Across the border in Missouri, the river broke a 225-foot-wide hole through a levee near Big Lake in Holt County. About 30 residents had stayed in the resort town after the river started rising, but they were told to leave Monday. Big Lake is about 45 miles south of Hamburg.

The Army Corps of Engineers has steadily increased the amount of water it is releasing from dams along the Missouri River to account for excess water from heavy spring rains in the northern Plains and to clear out space for above-average snowmelt coming down from the Rocky Mountains.

Releases from the river's five lower dams should reach 150,000 cubic feet of water per second Tuesday - more than twice the previous record releases.

Areas in Montana, North Dakota and South Dakota, have already seen some flooding, and officials predict the problems will linger through the summer.

National Weather Service hydrologist Dave Pearson described the breach near Hamburg as "pretty substantial." He said water was "flowing through quickly" but still must cross several miles of rural land to reach the Hamburg area.

It wasn't clear how deep the floodwaters approaching Hamburg were or whether they would prove too much for the secondary levee. Local officials posted video of the breach that showed the water spreading over a large area of farmland.

Terry Holliman, who owns an auto parts store in the town of about 1,100 residents, said water was shooting into farmland near one of three spots where the levee had previously leaked.

"It's impressive," Holliman said early Monday. "The force is unbelievable."

About 300 Hamburg residents left their homes and businesses last week under an evacuation order after partial breaches in the main levee, which is about 5 miles south in rural Atchison County, Mo.

The Army Corps of Engineers has been building up the secondary levee to protect low-lying areas of Hamburg since the partial breaches. Officials had been able to stabilize the initial leaks but had predicted the main levee eventually would fail.

Corps projections show that if the secondary levee fails, the volume of water released upstream during a levee break could leave 8 to 10 feet of standing water in southern Hamburg. The area includes manufacturing and agricultural businesses. Water could reach the fire station and City Hall, but it likely wouldn't reach the northern part of town where most residents live.

Longtime resident Pat Stoop was among those in flood-threatened neighborhoods who were hauling the last of their belongings out of their nearly empty houses Monday. The last time her home flooded, in 1993, the water barely crept over the floor, but it stayed for weeks. When she returned, her ceiling fan was covered in 3 inches of mold.

She's now considering a permanent move from the home where she's lived for more than four decades. Stoop said she was "thinking about 40 different things at once ... You start to do something, and then another thing, and before you know it you have 40 balls in the air. And you keep dropping them."

Iowa officials said they would close more than 20 miles of Interstate 29 in southwest Iowa and northwest Missouri by Thursday. Northbound lanes near Hamburg will be lined with about 7,500 feet of flood barriers, Ruch said.

The breach was pushing water into agricultural land, though a private levee that farmers built last year is helping slow the advancing flood, Holt County Clerk Kathy Kunkel said. Officials expect the private levee to eventually fail because of the large amount of water.

The record dam releases are expected to bring the Missouri River 5 to 7 feet above flood stage in most of Nebraska and Iowa before continuing into Missouri, where it may rise 10 feet above flood stage in several places and flow over the top of at least 11 rural levees. This summer's Missouri River flooding could rival the record years of 1952 and 1993 in some places.

The river is expected to remain high at least into August as the record releases from the dams continue.