NATO Says Troops in Crash Were After Taliban Leader 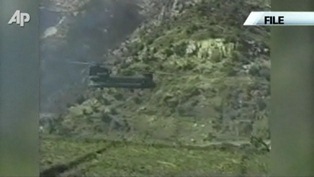 KABUL, Afghanistan (AP) -- The 30 U.S. troops and eight Afghans who died in a helicopter crash in eastern Afghanistan were on a mission targeting a Taliban leader when an insurgent with a rocket-propelled grenade reportedly fired on the chopper and shot it down, U.S.-led coalition said Monday.

The Chinook helicopter was transporting the troops to an ongoing battle early Saturday between coalition forces and insurgents in eastern Wardak province, NATO said in a statement.

It was deadliest single loss for U.S. forces in the decade-long war.

NATO said the operation began as a search for a Taliban leader responsible for insurgent operations in the Tangi Valley, when the ground forces saw several insurgents armed with rocket-propelled grenade launchers and AK-47 assault rifles and engaged them, killing some of them. They then called for assistance.

"As the insurgents continued to fire, the combined force on the ground requested additional forces to assist the operation. Those additional personnel were inbound to the scene when the CH-47 carrying them crashed, killing all on board," the statement said.

NATO said the ground forces broke contact with the insurgents after the crash to secure the scene and look for survivors.

Troops were working to recover every last piece of the helicopter and no one is being allowed in or out of the area during the investigation, said German Brig. Gen. Carsten Jacobson, a spokesman for the U.S.-led coalition.

The Taliban claims it shot down the helicopter with a rocket-propelled grenade, but the official cause of the crash has not yet been determined.

The fatal crash highlights the risks confronting the U.S.-led coalition as it looks to rely more on special operations forces while reducing the overall number of troops in Afghanistan by the end of 2014.

Jacobson said that despite the tragedy, the coalition was undeterred in its mission.

"The incident, as tragic as it was in its magnitude, will have no influence on the conduct of operations. It was a tragic day. It was a tragic loss," Jacobson said. "The campaign is going to continue. We will continue to relentlessly pursue the enemy in the fight that we are taking to them."

A current and a former U.S. official said the Americans included 22 SEALs, three Air Force members and a dog handler and his dog. The two spoke on condition of anonymity because military officials were still notifying the families of the dead.

All but two of the SEALs were from SEAL Team 6, the unit that killed Osama bin Laden in Pakistan last May, officials said on condition of anonymity because they were not authorized to release the information. None of the SEALs killed in the crash took part in the bin Laden mission.

Another NATO helicopter made a hard landing Monday in eastern Paktia province, the U.S.-led coalition said. It did not report any casualties and said the cause of the hard landing was under investigation. The coalition said there was no enemy activity in the area at the time.

The helicopter was a CH-47 of the same type that crashed on Saturday. It was flying in to pick up special operations troops, but apparently suffered a mechanical failure and crash landed, an officer in the war zone said. He could not be named because he was not authorized to comment publicly. The crew was rescued by the troops.