Final Effort for Troy Davis As Georgia Board Considers Case 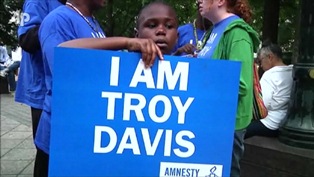 ATLANTA (AP) -- His legal appeals exhausted, supporters of Troy Davis were making a last-ditch effort Monday to stop his execution for the 1989 murder of an off-duty Savannah police officer, asking the Georgia pardons board to grant clemency the 42-year-old who insists that he is innocent.

The five-member Georgia Board of Pardons and Paroles has the power to change death sentences but rarely does. It was considering arguments surrounding Davis, who claims he is innocent of killing Mark MacPhail. He's set to be put to death by injection Wednesday, the fourth time in four years the state has tried to execute him.

Dozens of Davis' supporters rallied outside the government building where the parole board met. They hoisted a massive "Save Troy Davis" sign and formed a makeshift drum line at one entrance to the building. At another entrance, other supporters were holding a somber prayer vigil on his behalf.

Inside the closed-door meeting, a parade of attorneys and supporters asked the five-member board to spare Davis' life. Defense attorney Stephen Marsh said the legal team told the board there was too much substantial doubt about his guilt to allow the execution to go forward. Prosecutors were expected to argue their case later Monday.

Davis has captured worldwide attention because of the doubt his supporters have raised over whether he killed MacPhail, who was shot to death while rushing to help a homeless man who had been attacked. Several of the witnesses who helped convict him at his 1991 trial have backed off their testimony or recanted. Others who did not testify say another man at the scene admitted to the shooting.

The U.S. Supreme Court even granted Davis a hearing to prove his innocence, the first time it had done so for a death row inmate in at least 50 years, but he couldn't convince a judge to grant him a new trial.

The pardons board in 2007 decided to delay Davis' execution for 90 days to grant the courts more time to review the case. A year later, it denied clemency and allowed his execution to go forward. Since then, though, three new members have been appointed to the panel.

"We are hopeful this tremendous outpouring of support will demonstrate there's such a huge concern about this case, and that this message will resonate with them," said Laura Moye of Amnesty International, who delivered thousands of petitions in support of Davis to the board last week. "The very reputation and faith that this public has in its justice system is on the line."

The board, which meets in a closed-door session, first heard hours of testimony from Davis' legal team and its witnesses, although Davis himself is not scheduled to appear. The panel will then hear from prosecutors, MacPhail's family and their witnesses.

Davis' attorneys and supporters packed the pardons board for their session. Among the people who spoke were Quiana Glover, who said she was at a friend's house in June 2009 when another man told her he killed MacPhail, and Brenda Forrest, a juror who helped convict him in 1991 but is now having second thoughts.

"I feel, emphatically, that Mr. Davis cannot be executed under these circumstances," Forrest said in an affidavit presented to the board by Davis' attorneys.

The board will likely issue its decision by Tuesday. The Rev. Raphael Warnock, a Davis supporter who spoke at the hearing, said the board was attentive and inquisitive, peppering the speakers with questions. But he said it's too hard to predict how the panel will decide.

"It's a very difficult place to be. A man's life hangs in the balance," he said. "But we were very clear that an execution should not take place."

Two of the panel's five members have already reviewed the case several times: Gale Buckner, a former Georgia Bureau of Investigation agent, and Robert Keller, the ex-chair of a Georgia prosecutors group. The other three have been appointed to the board since 2009. They are: James Donald, the former head of the Georgia Department of Corrections, Albert Murray, who led the state's juvenile justice program, and Terry Barnard, a former Republican state lawmaker.

MacPhail was shot to death on Aug. 19, 1989 after rushing to help Larry Young, a homeless man who was pistol-whipped in a Burger King parking lot. Prosecutors say Davis was with another man who was demanding that Young give him a beer when Davis pulled out a handgun and bashed Young with it. When MacPhail arrived to help, they say Davis had a smirk on his face when he shot the officer to death.

Concerns about his case prompted the Supreme Court to order the nearly unprecedented innocence hearing. In June 2010, U.S. District Judge William T. Moore Jr. heard from two witnesses who said they falsely incriminated Davis and from two others who said another man had confessed to being the actual killer.

Moore said the evidence cast some additional doubt on Davis' conviction, but that it was "largely smoke and mirrors" and not enough to vindicate Davis or grant him a new trial. When the appeals courts refused to review the judge's decision, Davis' attorneys set their hopes on persuading the pardons board to grant clemency.

In a 60-page petition to the board, Davis' legal team contends that several witnesses who testified at his trial have disputed all or parts of their testimony, and that several others who did not testify say another man was to blame for the shooting. They say the evidence creates too much doubt to allow the execution to go forward. And they argue that a string of court rulings that upheld his conviction largely failed to address his innocence claims.

"The courts have determined that Mr. Davis's conviction was constitutional," the petition said. "That does not mean it was correct."

Prosecutors have stood by their case through the years. They say ballistics evidence links Davis to the shooting and that many of the concerns about witness testimony were raised during the trial. The allegations that someone else later confessed to the shooting, they say, are inconsistent and inadmissible in court.

And MacPhail's relatives say there's no question that prosecutors charged the right person with the officer's killing.

"There's no doubt," said Anneliese MacPhail, the slain officer's mother. "Not after I went through that trial and saw what I saw."