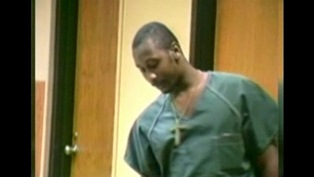 SAVANNAH, Ga. (AP) -- An elite Army Ranger, Mark MacPhail left the service and became a police officer to spare his wife and young children from the base-hopping life of a military career. Troy Davis dropped out of high school in his senior year to help care for his younger siblings, including a sister stricken with multiple sclerosis.

Both men inspired unwavering love and loyalty in their families that still runs deep more than two decades after one summer night forced the Davises and the MacPhails to opposite sides of a long legal battle that could end today in a Georgia prison death chamber.

MacPhail, 27, was moonlighting off-duty as a security guard outside a Savannah bus station on Aug. 19, 1989, when he was shot and killed rushing to the aid of a homeless man who was being attacked. Police arrested Davis as the killer, based on eyewitness statements that two years later swayed a jury to sentence him to death.

"It was definitely not the Troy we knew," said Davis's younger sister, Kim. "It was very, very shocking when it did happen. It kind of turned the family upside down."

Troy Davis, now 42, insists he's innocent and his lawyers, arguing they could prove it, have managed to spare him from three execution dates in the last four years. After a series of appeals that received special attention from the U.S. Supreme Court, Davis couldn't persuade the courts to grant him a new trial. With his legal options nearly exhausted, he now faces death by injection Wednesday night.

The slain officer's relatives say they're confident Davis killed MacPhail. His mother, Anneliese MacPhail, dismisses the inmate's advocates - from the NAACP and Amnesty International to former President Jimmy Carter and Pope Benedict XVI - as ill-informed interlopers who have only prolonged her family's push for justice. She says she's "cautiously confident" that will end Wednesday.

"I think I finally will have peace of mind," said MacPhail, who lives in Columbus. "When it is over I can close that book and I know Mark can rest in peace, too."

Kim Davis, the middle child of five siblings, says the family has never questioned her brother's innocence. She never knew him to have the callousness of a killer.

After Kim Davis was hospitalized with multiple sclerosis at age 14, she said her brother left high school to help care for her while their mother worked during the day. At night, Troy studied for and later earned his GED.

He would come to her bedside at the hospital and brush her hair or rub lotion on her hands and feet. Two years later, he prodded her to start walking without crutches. She recalls taking two steps toward her brother, and him taking two steps back. As she kept walking forward, she saw their mother watching with tears in her eyes.

After Davis' conviction, his mother and sisters would spend every Saturday making the 200-mile trip from Savannah on the coast to the small city of Jackson for family visits at Georgia's death row.

Virginia Davis, his mother, would sit quietly and pray with a prison Bible in her hands. Troy Davis would sing songs with his older sister, Martina, or play catch with her son after fashioning a makeshift football out of a soda bottle wrapped in potato chip bags.

"Troy would always say, `I don't want y'all to come up here every weekend,'" Kim Davis said. "And we always told him: `Troy, if you're on death row, we're all on death row.'"

MacPhail had grown up an Army brat along with four siblings, including his older brother Bill. The two were so close, their mother says, that Bill MacPhail flunked the first grade so he and Mark could be in the same class the following school year. Their father, an Army colonel, had a job that kept the family moving between military bases from New Mexico to Germany to Kansas before his death in 1975.

After high school, Mark MacPhail followed in his father's footsteps and joined the military. He became an Army Ranger and served with distinction. But after marrying, he sought more stability. Soon, he got a job as a Savannah police officer and started raising two young children. He'd call his mother during coffee breaks almost every day to make sure she was OK.

The last time Anneliese MacPhail saw her son was in July 1989 at his birthday party at her Columbus house. His wife had just given birth to their second child - a son, Mark Jr. - and the family had gathered in Columbus to celebrate.

"He was rolling on the grass here with his daughter. And would you believe she still remembers that?" she said with a grin. "We just talked. We talked until 2 or 3 o'clock in the morning. And the next day he waved goodbye."

During a sleepless night a month later, Anneliese MacPhail was still awake to answer her phone when it rang at 2:30 a.m. Her son had been shot in the face and again under his arm, where a bullet slipped beneath his bulletproof vest. He was dead.

"I didn't even cry after a while," MacPhail said. "It was like I was dead."

In the last four years, numerous supporters of Troy Davis have said he's not MacPhail's killer. But no advocacy group or celebrity supporter could match the zeal of his older sister, Martina Correia. Amnesty International's Wende Gozan Brown refers to her simply as "a force of nature."

Correia isn't one to let anything stand in the way of rallying support for her brother's cause. A decade ago she was diagnosed with breast cancer, and has battled the disease while working with advocates to keep Troy Davis' name at the forefront of the death penalty debate.

When their mother died in April, Correia didn't flinch when someone suggested they collect petition signatures supporting her condemned brother at the funeral, saying it's what their mother would have wanted.

But Correia's health has sidelined her in recent weeks, after an adverse reaction to cancer drugs put her in the hospital about a month ago, Kim Davis said. Family members have taken away Correia's cell phone and laptop, to force her to rest, but she's continued to help coordinate rallies and events in hopes of blocking her brother's execution one more time.

"We're going to fight like we always do," Correia said.

Kim Davis says her family remains positive that doubts about Troy Davis' guilt will sway Georgia's pardons board to grant him clemency when it takes up his case Monday.

She refuses to consider the alternative - that her brother's fight could end with his execution next week. When a funeral home worker asked her to fill out paperwork authorizing a hearse to move her brother's body from the prison, she signed the form but refused to write her brother's name on the document.

"I told her I'm not putting his name on it, because I'm looking for victory. Victory over death," Kim Davis said.

When his father was gunned down, Mark MacPhail Jr. wasn't quite 2 months old. Now 22, he has lived all his life in the slaying's aftermath.

He says the execution of Troy Davis will help his family begin to put the tragedy behind them.

The younger MacPhail moved back to Savannah in 2008 and enrolled at Armstrong Atlantic State University, where he's studying criminal justice. He says he would like to become a police officer, like his father, and perhaps a detective.

Last month, on Aug. 19, Mark MacPhail Jr. paid a visit to his father's grave in Savannah. It's something he does almost every year on the anniversary of the shooting. He says those visits are "a very private thing" - a solitary time to connect with the father he can barely remember.

"It's kind of my chance to have a father-son talk," said the younger MacPhail. "It's my chance to be close to him."

The two families will be brought together on Monday when they travel to Atlanta for the parole board meeting.

If there's no reprieve, the families will converge once more on Wednesday at Georgia's state prison in Jackson for Troy Anthony Davis' execution.