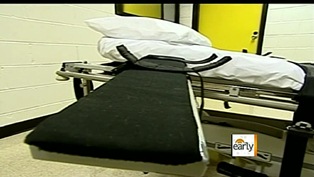 JACKSON, Ga. (AP) -- It didn't take long to notice Troy Davis' execution was different from the others I've covered. As I drove up to the prison, I could see the crowds of protesters and a group of at least 50 reporters.

I've covered about 10 executions in Georgia. None of them are easy. This was by far the most unusual.

There were four reporters besides me there to witness the execution. We ended up waiting for more than four hours in a somber prison break room. We made small talk and speculated about whether the U.S. Supreme Court could intervene. At times, it was silent.

We were led into a white van and, after passing through several security checkpoints, we were delivered to the squat white building on the edge of the prison that serves as the death chamber. We watched the slain officer's son, Mark MacPhail Jr., enter the building. Behind him, Jason Ewart, the condemned man's attorney, walked in. A county coroner's van rolled up.

By the time we were inside, officials had already strapped Davis to the gurney. There was a glass window with a curtain separating Davis from the witnesses, who sat in three rows of seats. There were about 20 of us.

Davis searched for Ewart, who nodded slightly when they locked eyes. MacPhail Jr., sitting in the front row, focused on Davis.

When it was time to deliver his last words, Davis' seized the moment, speaking quickly and confidently.

He told the MacPhail family he was not responsible for the death. "I am innocent. The incident that happened that night is not my fault," he said.

Davis urged his supporters to "continue to fight the fight." And just before the lethal drugs coursed through his veins, he offered a message to his executioners: "God have mercy on your souls."

Davis blinked his eyes rapidly. He squeezed them tight. The curtain closed.