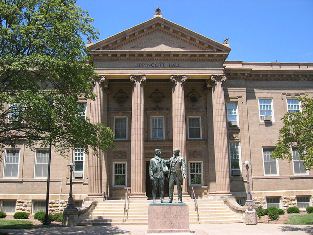 ST. PAUL, Minn. (AP) -- The University of Kansas is buying up website names such as http://www.KUgirls.xxx and http://www.KUnurses.xxx . But not because it's planning a Hot Babes of Kansas site or an X-rated gallery of the Nude Girls of the Land of Aaahs.

"Down the road there's no way we can predict what some unscrupulous entrepreneur might come up with," said Paul Vander Tuig, trademark licensing director at the Lawrence, Kan., school.

Indiana University spokesman Mark Land said the school spent $2,200 to buy http://www.hoosiers.xxx and 10 other such names. Other Indiana schools took the same step, including Purdue University and Ball State University.

"This is just a modest cost of doing business in the world we live in," Land said.

A search of ICM's database finds prominent brand names - including Nike.xxx, Pepsi.xxx and Target.xxx - among those purchased.

The strongest opposition to the suffix has come from the adult entertainment industry. The Free Speech Coalition, the industry's trade group, lobbied against its creation, complaining among other things about the registration fees.

Vivas said she doesn't think her company - or any organization, adult-oriented or not - should have to pay to protect its trademarks. Otherwise, "it kind of becomes extortion."

Lawley said ICM will take steps to protect existing trademarks even if companies or schools fail to lock down certain website names.

Patrick Condon can be followed at: http://www.twitter.com/pcondonap