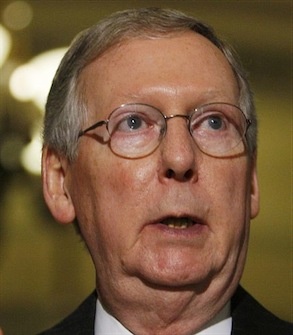 House Speaker John Boehner expressed the same view earlier Friday. The Ohio Republican told reporters that if the Senate sends the House compromise payroll tax legislation without the pipeline provision, the House will vote to put it back in.

President Barack Obama and many congressional Democrats are opposed to accelerating work on the proposed 1,700-mile Keystone XL pipeline. That conflict has been one of the major hurdles to a bipartisan compromise on the payroll tax package.

THIS IS A BREAKING NEWS UPDATE. Check back soon for further information. AP's earlier story is below.

House Republicans will stick to their insistence that a bill extending a payroll tax cut and jobless benefits include language speeding work on a Canada-to-Texas oil pipeline, Speaker John Boehner said Friday.

Boehner's remarks added a contentious backdrop to negotiations over the payroll tax cut measure. President Barack Obama and many congressional Democrats are opposed to accelerating work on the proposed Keystone XL pipeline, which would run 1,700 miles from western Canada. That conflict has been one of the major hurdles to a bipartisan compromise on the payroll tax package.

Meanwhile, the House began debating a $1 trillion spending bill that would avert a partial federal shutdown beginning Saturday. That measure, which would finance dozens of federal agencies through September, would replace a stopgap spending bill that expires at midnight Friday. House passage on Friday was certain, and the Senate was expected to approve it over the next day or two.

Negotiations on the payroll tax cut legislation between Senate Majority Leader Harry Reid, D-Nev., and Senate Minority Leader Mitch McConnell, R-Ky., were continuing Friday. Leaders are hoping that Congress will finish that bill and others and end its work for the year in the next few days.

Reid said Friday that bargainers were making good progress in those talks, a sentiment echoed by McConnell.

"The majority leader and I are making significant progress on reaching agreement on a package that will have bipartisan support, I hope," McConnell said. "I think we're going to get to that place."

With those talks under way, House leaders planned to send their members home after finishing their work Friday, with plans to return when the Senate produces a payroll tax cut measure for the House to vote on.

"I guarantee that the Keystone pipeline will be in there when it goes back to the United States Senate," Boehner said.

The way was smoother for the compromise spending bill. It would fund 10 Cabinet-level departments, such as the Pentagon and the Department of Education, and dozens of smaller agencies. It would finance everything from U.S. operations in Iraq and Afghanistan to veterans' services, and from airport security inspections to Congress' own operations.

Reid and McConnell said that even if only the House had approved the spending bill by midnight Friday, the Obama administration agreed there would be no federal shutdown.

Agreement on the spending legislation was reached after Republicans agreed to drop language that would have blocked Obama from easing rules on people who visit and send money to relatives in Cuba. But a GOP provision will stay in the bill thwarting a 2007 law, passed during the administration of President George W. Bush, on energy efficiency standards that critics argued would make it hard for people to purchase inexpensive incandescent light bulbs.

This year's 4.2 percent payroll tax rate will jump back to its normal 6.2 percent on Jan. 1 unless action is taken by Congress. Few lawmakers want to be blamed for a tax increase that would affect 160 million people.

That same day, a 27 percent cut in Medicare reimbursements to doctors would take effect unless lawmakers act, a reduction that could convince some doctors to stop treating Medicare patients.

Obama and congressional Democrats have proposed dropping next year's payroll tax rate to 3.1 percent, but an extension of this year's 4.2 percent rate seems likely to prevail. The payroll tax is the major source of financing for Social Security.

Obama also wants to leave in place the current maximum of 99 weeks of benefits for the long-term unemployed. A payroll tax cut bill approved by the House reduces that total by 20 weeks, which the administration says would cut off 3.3 million individuals. Democrats are hoping to soften if not reverse what's in the House version.

Even without the Keystone pipeline dispute, bargainers had still not reached agreement on how to extend a payroll tax cut through 2012, with major disagreements remaining over how to finance the package.

Just in case, Senate leaders have prepared a shorter, two-month extension of the payroll tax cut and jobless benefits to give themselves more time to reach an agreement.

The two-month payroll tax cut bill, which would also delay the Medicare cuts for two months, would cost $40 billion - almost $200 billion less than the cost of a one-year extension, which might also include a renewal of some expiring tax breaks.

A senior White House official said the administration supported the two-month plan. Its support in the House was uncertain.

While approval of the short-term measure would let lawmakers go home for the holidays, it would leave them facing the same dispute - how to pay for a longer extension of the tax cut and jobless benefits - in the political hothouse of a presidential and congressional election year.

The short-term bill would be paid for from a menu of about $120 billion in savings that bargainers were considering, including sales of the broadcast spectrum and raising fees that Fannie Mae and Freddie Mac charge to back mortgages, according to a Democratic aide who spoke on condition of anonymity.