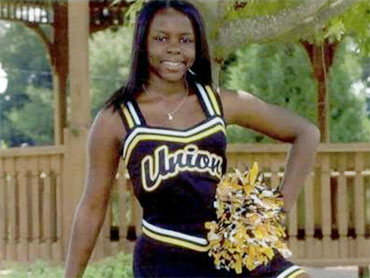 SPARTANBURG, S.C. (AP) -- Marisha Jeter should have been a junior in college this year. She talked about attending Duke University to pursue a medical degree.

The 16-year-old Union County High School cheerleader and junior class president had nothing but a bright future ahead, but on Jan. 3, 2008, her life was cut short.

Marisha was stabbed to death by husband and wife Pernell Clayton Thompson and Yolanda Dee Thompson. The two are serving life sentences for the crime that left a grieving father and mother to move on in life without their only daughter.

Manning and Maretta Jeter might never fully recover from losing their daughter, but they know Marisha would be happy to know her memory is living on in the form of the Marisha Sharay Jeter Scholarship Fund -- an annual award that's helping give other young scholars the college experience she never had.

``We wanted to do something to help other young ladies who were good in school,'' Manning Jeter said. ``Marisha always loved school, and she was very high in academics -- always was in advanced classes. We felt that this was a way to try to keep her legacy going as well as help another young lady every year.''

``I think because Marisha was and is a star,'' Maretta Jeter added, the scholarship ``just continues to help her star shine.''

Marisha Jeter was an honor roll student with a 4.1 grade point average at the time of her death. She played the flute in the marching band, was on the yearbook staff, was a member of the National Honor Society, Beta Club and Quill and Scroll Society and performed with the Winter Guard. She was active in her church, where she was a junior usher, secretary of her Sunday school and a singer in the youth choir. Marisha loved to sing. Her favorite song to perform was ``His Eye is on the Sparrow.''

Manning Jeter said her voice was like ``a herd of angels.''

Her brother, TJ, a music major at Limestone College, said his younger sister could always upstage him when it came to music. Her voice drew emotion from everyone who heard it, he said.

``The way she sang and performed kind of mirrored the way she lived, and the way I looked at her,'' said TJ, 25. ``I never looked at her as this bigger than life person, the way all of this has proven that she is. That's kind of the way she sang. She would sing tears into people's eyes and never move. . She looked like a statue, and this big voice would be coming out.''

Even after death, Marisha is touching lives in a big way.

So far, three Union County High School students have received scholarships from the Marisha Sharay Jeter Scholarship Fund, organized shortly after Marisha's death. The first award was handed out in 2009 -- the year Marisha would have graduated. One female UCHS student will receive the $1,000 scholarship each year. Recipients must be ambitious, dedicated young women with good grades, a strong faith in God, no discipline problems and an undeterred desire to succeed in life. Students are selected to receive the scholarship each year by recommendation from the high school guidance office and approval by the Jeter family.

Manning and Maretta Jeter said the scholarship will far outlive them, and the responsibility will eventually be passed on to their three sons, TJ, Rahim, 32, and Andre, 34.

TJ said it's a legacy he's happy to carry on. His sister would like seeing deserving students getting the help they need, he said. It's also a way to see some good come from very negative circumstances.

``I think it helps (my parents) more than they realize,'' TJ said, ``because it gives them, from outside looking in, it gives them a way to be close to her, and at the same time, they have something to do and something to look forward to -- a goal each year instead of sitting around waiting for birthdays and holidays. It keeps them going.''

Maretta Jeter agreed with her son. She said the outpouring of support since her daughter's death has brought the true impact of her life into focus.

``We had no idea the impact that she made in those 16 short years,'' Maretta Jeter said. ``She really touched a lot of people, and she was important to a lot of people.''

Manning Jeter said it helps to know the scholarship is something his daughter would have been proud of.

``Her greatest asset was her compassion,'' he said. ``She didn't want to see anybody hurt or anybody left out. She was the kind of young lady who would seek out the underdog and try to bring them to the top. This scholarship would be something that she would want. She would want to do something to help.''

Iysha Russell, 18, was selected to receive the scholarship last spring. Now a freshman strength and conditioning major at Limestone College, Russell called it a ``blessing.'' She's using the money to help buy books for her classes, but more than that, the scholarship reminds her of a friend. Russell recalled many nights she spent at the Jeter house for sleepovers when she and Marisha were younger.

``It's not about the money, but that the scholarship carries her on, even though she's not here,'' Russell said.

Jessica Hall, 19, was awarded the scholarship when she graduated from UCHS in 2010. The college sophomore earned a full ride to Wake Forest University, where she's majoring in health and exercise science with minors in Spanish and psychology, but the scholarship is helping with other expenses, such as books.

Hall and Marisha were friends throughout their early school years, and grew even closer in high school. Receiving the scholarship in her friend's name ``meant a lot,'' she said.

``Marisha was the type of girl who always had a smile on her face, no matter what,'' said Hall, who aspires to be a pediatrician. ``She would brighten up my day, no matter what was wrong. She was an amazing person.''

The scholarship was formed with money from the Jeter family, area businesses and private donations. The Union County School District assisted in setting up an account and managing funds early on. Today, the bulk of the money is with the Spartanburg County Foundation.

David Eubanks was superintendent of the Union County School District at the time of Marisha's death and helped the Jeter family in setting up the scholarship fund.

Marisha's death was tragic, Eubanks said. It was a tremendous blow to the district to lose such an ``outstanding student'' with a ``tremendous future ahead.'' The scholarship, he said, helped with healing.

``I think the scholarship has been a way, if just a very minor way, of trying to cope with the circumstances and trying to create a positive situation that came out of just a terrible incident,'' Eubanks said. ``It's just another indication of not only trying to turn a negative into something positive, but, I think, family and community organizations working together for the best of the community.''