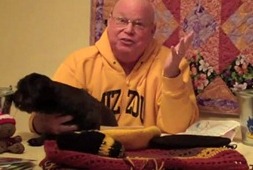 COLUMBIA, Mo. (AP) -- At first, David Oliver ignored the bump on his neck that he noticed while shaving. The medical school professor assumed it was calcified scar tissue from a previous surgery.

But the growth didn't go away, and his sore back grew more painful. A doctor's diagnosis confirmed the worst: He had a form of upper throat cancer called nasal pharyngeal carcinoma. It had spread to his lymph nodes and bones.

Then Oliver, who has spent a career teaching medical students and hospital workers how to care for dying patients, took an unusual step. He made a video to break the news to colleagues. And when the clip spread far beyond this Missouri college town, Oliver undertook a bigger mission: documenting his treatment in regular videos and promoting an unusually public conversation on medicine and mortality.

Oliver, a 69-year-old specialist on aging and a former health care executive, at first struggled to absorb the diagnosis in September. His cancer is considered treatable but not curable.

He wanted to avoid the inevitable stares from colleagues at the University of Missouri's medical school, even those whose jobs often required them to confront terminal illness. He knew there would be whispers in the hallway and uncertainty about how - or even whether - to discuss the disease.

Oliver's initial video was meant to "put them at ease when they saw me. I'm still David," he said. "I might have five years. I might have six months. But I want you to be comfortable."

The video quickly spread after Oliver's five adult children shared the three-minute clip with Facebook friends, who in turn shared it with their own friends. A short time later, he started a video blog and a YouTube site.

A viewer from Japan, his stepdaughter's former study abroad teacher, wanted advice on how to comfort his own friend with cancer. Medical students probed for suggestions about patient care. A college professor in Florida asked permission to use the video in class.

A former Vietnam War protester who four decades ago entered the then-nascent field of gerontology, Oliver spent decades sharing lessons on how to die. Now, buoyed by the power of social media, he was showing others how to live.

Anyone who expected to feel sorry for Oliver was quickly disabused of that notion after watching his first diary entry. A die-hard Missouri Tigers fan, Oliver made sure to highlight the two "puke buckets" he planned to obtain for chemotherapy and radiation treatments: one emblazoned with the rival Kansas Jayhawks logo, the other bearing an Oklahoma Sooner, another foe.

Beyond the humor, Oliver realized his illness provided a chance to help prepare patients and their loved ones, to trade whispers for matter-of-fact observations, to push the conversation from the shadows into the virtual public square.

The second video installment featured Oliver getting his head shaved, his full crop of grayish-blond hair falling to the salon floor before the chemo drugs took their toll.

By the third video, his bald head was gleaming. Oliver stood behind a dozen pill bottles containing a wide range of drugs - from the steroid dexamethasone to morphine. He talked about dealing with "chemo brain," the persistent mental fog that trails the otherwise lucid professor post-treatment.

In mid-December, a noticeably subdued Oliver appeared on camera to chronicle the 21 days between his three chemotherapy treatments to that point. He talked about the highs of the first few days, fueled by energy-boosting steroids that made him feel "ready to run a triathlon." Then comes the crash, Oliver explained, five days of agony marked by dizziness, diarrhea, constipation, mouth sores, confusion, tingling, hand cramps, rashes and disorientation.

"It's a trick," he said about the initial euphoria. "The Kryptonite comes. Superman is dead on the fifth day."

Ever the professor, he used a bar graph to illustrate his three-week cycles.

Four months of treatment have also given Oliver a window into modern health care from the patient's perspective. He hasn't liked all that he's seen, particularly the limited interaction between doctors and nurses. He makes sure that his caregivers are also watching his video dispatches.

"I'm in a position to be extremely critical while they're giving me treatment," Oliver said. "They consider me an advocate. They want me to help with their patient training."

Oliver, a former executive at Heartland Health System in St. Joseph, knows he can engage with his doctors on a level of familiarity that most patients cannot. That's another motivation for his videos, to help level the playing field.

As the disease lingers, he and his wife of 16 years, Debra Parker Oliver, must also plan for life after his death.

A few short months ago, that talk consisted mostly of retirement, visits with the grandchildren and their next ocean cruise. Now it means stressful sessions with financial advisers and making plans for his memorial service.

"I am not afraid to die," Oliver said. "I am a gerontologist. I know that none of us get out of this alive."

His wife, an associate professor and former hospice worker who also works in the family and community medicine department, is less certain.

"Maybe he's not afraid to die, but he's afraid of dying," she said, her husband by her side. "The idea of this man being confined to a bed, maybe not being able to speak, is much more scary than what you are willing to admit."

On a recent visit to the Ellis Fischel Cancer Center, the couple received some encouraging news: A scan showed no visible lesions, meaning all were less than 1 centimeter in length. He will return later this month for two final rounds of chemotherapy followed by three months of freedom from medical procedures before getting another scan.

Best of all, the good news buys him time.

Time for a long-awaited cruise to Istanbul and Rome. Maybe time to travel to the NCAA basketball tournament in March to watch his beloved Tigers as the team seeks its first-ever Final Four berth.

No one knows how much time remains. If it's more than a year, he added, "we can produce a lot more videos."