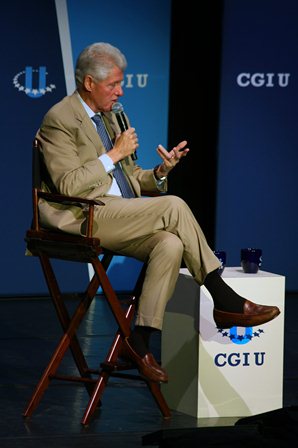 Former President Bill Clinton will head to Wisconsin Friday to campaign on behalf of Milwaukee Mayor Tom Barrett, the Democratic challenger to Republican Gov. Scott Walker in the state's recall election next Tuesday.

Rep. Debbie Wasserman Schultz, the DNC Chair, and Maryland Gov. Martin O'Malley, the chair of the Democratic Governors Association, both campaigned in Wisconsin Wednesday. A number of high profile Republicans, including Governors Chris Christie of New Jersey, Bob McDonnell of Virginia, and Bobby Jindal of Louisiana, as well as Sen. Marco Rubio of Florida have all recently campaigned in Wisconsin with Walker. South Carolina Gov. Nikki Haley teams up with Walker in the state Friday.

The most recent non-partisan polls released over the past week indicate Walker with a single digit advantage over Barrett, who won his party's primary earlier this month, setting up a rematch with Walker from the 2010 election, that the Republican won by five points.

Wisconsin voters will cast ballots in the recall contest to decide whether to remove Walker from office following last year's bitter battle over his push to limit the collective bargaining rights of state public employee unions.