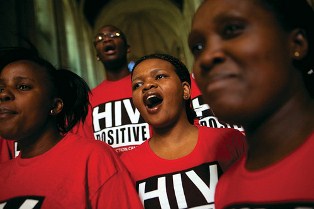 (CNN) -- Only one in 500 Americans is a black gay or bisexual male, but black men who have sex with men (MSM) account for one in four new HIV infections in the United States, according to a new report by the Black AIDS Institute (BAI).

Just days away from the first International AIDS Conference to be held on U.S. soil in 22 years, the BAI, a national think tank focused on African-Americans, released a somber account detailing how the virus continues to disproportionately infect and kill young black men who have sex with other men.

According to the report, "Back of the Line: The State of AIDS Among Gay Black Men in America 2012" a black gay man has a one in eight chance of becoming infected by the time he's 20 years old. By the age of 40, the likelihood is 60%. It also says black men having sex with men are more affected by the disease than any other group in the developed world.

"Black MSM continue to be first in line when it comes to need, but remain at the back of the line when it comes to assistance," said Phill Wilson, founder and executive director of the Black AIDS Institute. "This report not only highlights the gaps and why they still exist after 30 years, but it also provides a blueprint for how to close the gaps and move those most at risk up to the front."

The number of gay black men with HIV is twice that of gay white men, the report found. In fact, in New York City, cited as one of the three best cities to live in for gay black men, they are 488 times more likely than other males, and 325 times more likely than black heterosexual males, to be diagnosed with the disease. Three years after an AIDS diagnosis, black MSM are less likely to still be alive than their white or Latino counterparts.

And even though the report suggests black men are more likely to take steps to reduced their risk of infection than other MSM, the are still twice as likely to get the virus.

The Institute is calling for more testing, a scale-up of antiretroviral therapy, a plan to combat homophobia, and the introduction of pre-exposure prophylaxis (also known as PrEP) where the uninfected partner of someone with HIV gets on drug therapy as well. Recent studies show that PrEP can lower the rate of HIV transmission up to 96%. The U.S. Food and Drug Administration recently approved the drug Truvada for this use.

BAI is also calling for the implementation of a national plan to end AIDS in African-American gay and bisexual men.

According to the Centers for Disease Control and Prevention (CDC), African-Americans overall carry the heaviest burden of HIV. The latest CDC statistics show blacks make up only 14% of the population but have 44% of all new infections. In fact, in 2009 - the most recent data - MSM made up 73% of all new infections in all black men. MSM between the ages of 13 and 29 saw more new infections than any other age and racial group of MSM.

Rep. Maxine Waters (D-California) has been a Congressional leader in the fight to end the spread of HIV/AIDS, and has introduced several pieces of legislation to increase research, screening, treatment and funding.

"Current policies do not adequately address the unique needs of black MSM in America. Local and national leaders must remain vigilant in the fight against AIDS, especially in the black community, which continues to carry the heaviest burden," Waters said. "Unless we change the way we do business, we cannot reverse the epidemic. No one should be forced to the back of the line."