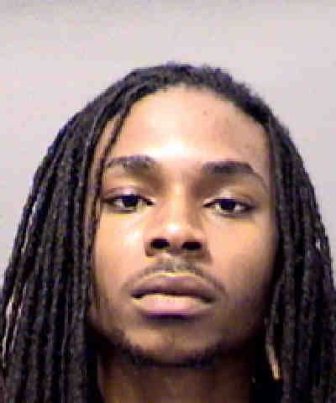 WASHINGTON (CNN) -- A North Carolina man was arrested Wednesday and accused of threatening to kill President Barack Obama in a series of Twitter messages, including one saying, "The Secret Service is gonna be defenseless once I aim the Assault Rifle at Barack's Forehead."

Donte Jamar Sims, 21, had an initial court appearance in Charlotte on Thursday and remains in custody.

Charlotte is the city hosting the Democratic National Convention. President Obama arrived there Wednesday afternoon in advance of his Thursday night acceptance speech.

The court document states a Secret Service intelligence research specialist saw the messages on Twitter, which led to an agent going to Sims' home to interview him on Wednesday.

In the affidavit, the Secret Service agent who interviewed Sims said the suspect admitted to having the Twitter account associated with the messages and wrote that Sims smiled when the threatening statements were read aloud to him.

"Sims stated that he published the statements because he hated President Obama," the agent wrote in the affidavit. "Sims asserted that he was high on marijuana when he made the threats but that he understood what he was doing and that it was wrong."

According to the court document, the agent then arrested Sims on several outstanding warrants. The officer said Sims later waived his Miranda rights and said his demeanor changed. "He asserted that he was sorry he sent the messages threatening to kill the president of the United States and provided me with a written apology," wrote the agent.

The court document makes no mention of Sims having any weapons in his possession. It also does not provide details on the previous arrest warrants for Sims.

Kevin Tate, a federal public defender representing Sims, would not comment on the case in advance of a detention hearing scheduled for September 11.

If convicted of threatening the president, Sims faces a maximum of five years in prison and a $250,000 fine.