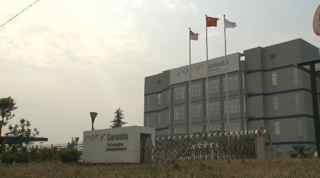 CHANGZHOU, China (CNN) -- This is a bustling, modern Chinese city. Shoppers decked out in the last fashions prowl shining new shopping malls. It's about two hours drive from the glamorous metropolis of Shanghai, yet it's fair to say very few people outside of China have heard of it.

But now, Changzhou has landed right in the middle of a U.S political firestorm. It's all about jobs; American jobs shipped to China. And it goes all the way to Republican presidential candidate Mitt Romney.

In a thriving industrial area on the outskirts of Changzhou is a factory run by Sensata Technologies. It makes sensors for cars. Sensata is controlled by the private equity firm Bain Capital, and that is where Romney comes in.

Romney is one of the founders of Bain Capital. And although he left the company years before it bought Sensata, he can't escape the political fallout.

Outside the Sensata factory gates, we managed to catch a group of workers on their lunch hour. We talked with them quickly to avoid drawing the attention of company security guards.

I asked one worker if he knows who Mitt Romney is.

"You don't know who he is? He's running for president of the United States," I explained.

They may not be up to speed on U.S. politics here, but they know a lot about the economy, about how incomes are rising even if it is at the expense of American workers.

"It's determined by the market -- jobs go wherever labor is cheaper. It makes sense," one worker said.

The American flag flew proudly at the gates of the Sensata plant, but the facility is also a symbol of Chinese economic power.

Workers in Freeport, Illinois, say this is where their jobs are going, to factories just like this one in Changzhou.

Angry American workers are camping in tents outside the Sensata plant in Freeport, protesting the planned closure of a place where they have worked for decades.

The closure in December is set to wipe out 170 jobs. The workers say they suffer while the company profits from cheap Chinese labor.

"Nov. 5 is scheduled to be my last day after 33 years," said one despondent employee.

On Wednesday, the Rev. Jesse Jackson Jr. was one of 16 people arrested and charged with criminal trespass after they marched onto the Sensata property in Freeport. Jackson and the 15 other protesters were quickly released after being served with citations for trespassing.

Workers at the Freeport facility have erected posters and placards putting the blame for the shutdown directly on Romney.

The Republican candidate has pledged to play hard ball with China during his campaign. Time and again, he's criticized the ruling Communist Party, saying it deliberately keeps China's currency low to gain an advantage in exports.

If elected, he says he will declare China a currency manipulator on day one of his presidency, raising the prospect of a trade war.

But with an eye on events at Sesanta, President Barack Obama has scoffed at Romney's claims of getting tough on China.

Back in Changzhou, workers say America's loss is their gain. They say they enjoy good conditions and regular eight-hour shifts. But they won't reveal how much they are paid.

"That's a secret," one of them said as others laughed loudly.

Among the Chinese workers, we see two Americans. They tell us they are in China on rotation. They say they are fully aware of the controversy over jobs at the company, and concede that it is a complicated issue. Right now, they're just happy to be working themselves.

But, for how long?