China's Next Leader Keeps Iowa Close to His Heart 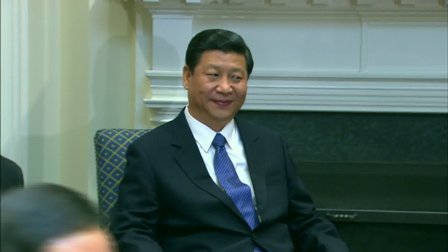 (CNN) -- The man destined to become leader of the world's most populous nation will sit in the halls of power in Beijing, but a part of him remains in the American heartland.

Xi Jinping's visit to the United States last February included expected stops in Washington and trade meetings in California. Even an NBA game. But the part Xi, 59, looked most forward to was an evening in Muscatine, Iowa.

He wanted to visit "old friends" he'd met on a trip to Iowa almost 30 years ago.

Rewind to a time when Mikhail Gorbachev was ascending to the leadership of the Soviet Communist Party, Terry Anderson was taken hostage in Lebanon and Tiananmen Square was just another place in Beijing. Xi arrived in Muscatine for two weeks in April 1985 with a Chinese delegation looking into farming technology.

The next leader of the powerful communist state -- he is expected to take the helm early next year -- got a first-hand look at how American capitalists do agriculture.

Doyle Tubandt, president of Muscatine Foods Corp., recalled how Xi discussed globalization, its scope then unimaginable to many Americans.

Back then, he escorted Xi on a tour of a corn processing plant. At times, the language barrier was hard to overcome. How do you translate words such as centrifuge? Tubandt gestured heavily and drew drawings in the sand to explain things to his Chinese visitor.

He kept a tin of black tea that Xi presented to him as a memento of the visit. After all these ears, the tin is preserved half full.

Tubandt was one of 14 people invited to a private dinner with Xi at the circa 1866 Victorian home of Sara Lande in February. They had all met Xi on his first trip.

Then, Xi had dined on Iowa beef and corn. Lande decided to go up a notch on elegance for China's next leader. Her menu boasted tenderloin, spring rolls and bacon-wrapped scallops.

"You were the first group of Americans I came into contact with," Xi told his Iowa friends. "To me, you are America."

Xi's visit was a big deal for Muscatine, a small eastern Iowa town known for farming, the largest Heinz plant outside of Pittsburgh and factories that used to spit out billions of mother-of-pearl buttons. That was before the refinement of plastic.

As Iowa Gov. Terry Branstad put it: This is the biggest thing to hit Muscatine since Pope John Paul II's visit in 1979.

Branstad, who also met Xi in 1985, was invited to the dinner hosted by Lande.

"We consider you a great friend of Iowa," Branstad told Xi, according to The Muscatine Journal. "We are so appreciative you chose to come to Muscatine and to Iowa."

Xi also visited a farm near Maxwell, Iowa, in February, and while in the state, he and other Chinese officials signed a five-year cooperation deal with Washington on food security, food safety and sustainable agriculture.

Chris Steinbach, the Journal's editor, told CNN that he had received thousands of e-mails from journalists around the world who were curious about Xi's visit.

"It's obviously a pretty big deal," Steinbach said. "You never know what will come as a result of this kitchen-table diplomacy."

That kind of one-on-one relationship made an impression on Xi on his first trip to Iowa.

"When you get the opportunity to meet somebody in their home or in a private setting, you get to know them differently than at a state dinner," Steinbach said. "Clearly that worked on Mr. Xi when he was here 27 years ago."

Now, as China's ruling Communist Party convenes its 18th National Congress, the world wonders what course the global power will chart under new leadership. What will the future bring for America's relationship with the Asian giant?

In Iowa, some people know this: that sometimes, it pays to sit on a couch, in front of a blazing fire and build a bridge to friendship. And that even after Xi assumes China's top post, he will keep Muscatine close to his heart.