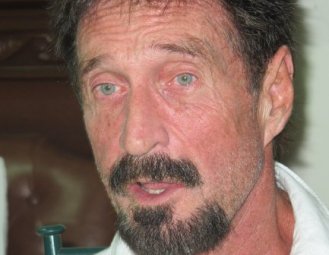 American technology pioneer John McAfee said he faked a heart attack while detained in Guatemala to buy time for his attorney to file a series of appeals that ultimately prevented his deportation to Belize, hastening the government's decision to send him back to the United States.

After weeks on the run and days in immigration detention, McAfee arrived in Miami on Wednesday.

He said Belize authorities in April 2011 accused him of running a methamphetamine lab, before the November 11 killing of his neighbor, American businessman Gregory Faull, and have since persecuted him.

"I have absolutely nothing to do with the murder in Belize," he said Thursday. "This is not about a murder in Belize. This began on the 30th of April of last year when 42 armed soldiers stormed my property."

After weeks in hiding, the 67-year-old antivirus software company founder emerged in Guatemala's capital last week to ask for asylum.

Guatemalan authorities took him into custody on accusations of entering the country illegally, and his asylum bid was rejected. McAfee then waged a public battle, requesting asylum and arguing that police in Belize were after him following his apparent decision to shed light on corruption in the country.

"He opted to return to his country of origin," said attorney Telesforo Guerra, who has represented McAfee since he arrived in Guatemala last week.

On Sunday, McAfee told reporters that he hoped to go back to the United States.

"Our intent is to return to America, if at all possible, and settle down to whatever normal life we can settle down to under the circumstances," he said. "There is no hope for my life if I am ever returned to Belize."

Authorities in Belize, where McAfee had lived since 2008, say they want to talk to him about Faull's death.

McAfee's home on Ambergris Caye, an island off Belize's mainland, was raided after Faull's death. National police spokesman Raphael Martinez said authorities went into the house amid suspicions there were illicit weapons and drugs inside, but neither were found.