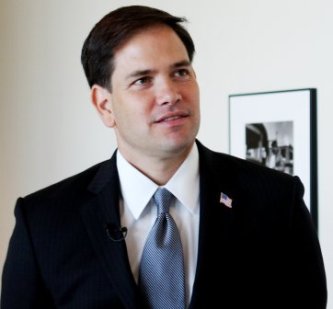 Rubio, long an opponent of Obamacare, said he could support a so-called continuing resolution bill if it includes an amendment stripping funding from the Affordable Care Act. Such an amendment has been offered by Sen. Ted Cruz, who like Rubio was elected with support from the tea party.

Rubio made the statement on the Hugh Hewitt radio show: "Senator Cruz from Texas is offering this amendment to defund Obamacare. If that gets onto the bill, in essence if they get a continuing resolution and we vote on that and we can pass it onto a bill, I will vote for a continuing resolution, even if it's temporary, because it does something permanent and that is de-fund this health care bill, this Obamacare bill that is going to be an absolute disaster for the American economy."

In Rubio's home state, a key provision of Obamacare was recently endorsed by the state's Republican governor. Rick Scott said he would accept federal funding to expand Medicaid coverage in the Sunshine State, which is an optional facet of Obamacare. Other Republican governors have said they would not accept the federal funding to expand the program for low-income Americans.

In introducing his amendment delaying funding for Obamacare in the continuing resolution, Cruz wrote the health care law was "already hurting small businesses, reducing the hours Americans are allowed to work, forcing employers to drop coverage, and leading to substantial increases in healthcare premiums-especially for young people."

While Republicans have railed against Obamacare since its implementation in 2010, most admit the prospects of repeal dimmed significantly with the president's re-election last year. Cruz's amendment de-funding the measure is one way Republicans are keeping opposition to the law in the spotlight.

The amendment, however, doesn't face a bright future in the Senate, where Democrats hold a 53-45 majority. Two independent senators caucus with Democrats.

On Wednesday, the GOP-controlled House passed a measure keeping the federal government funded through September. The legislation also softened the impact of the across-the-board spending cuts that were triggered at the beginning of March. The Senate is expected to adopt its own version of the government funding bill the further alleviates the impact of the spending cuts.

The continuing resolution is needed to extend authorization for government spending beyond the current March 27 deadline.

A partial government shutdown would occur if Congress fails to extend funding authorization by the deadline in three weeks' time, but leaders of both parties say they don't want another political showdown over the legislation.