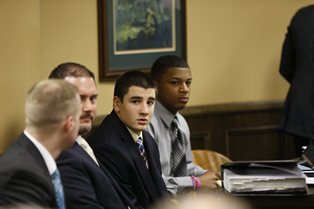 (CNN) -- Once again, social media messages are helping get Steubenville, Ohio, teenagers in trouble, according to authorities.

This time, it's for allegedly threatening violence against the 16-year-old girl whose sexual abuse by two other teens in August was partially documented in texts, tweets and pictures posted to the Internet.

They're being held in the county's juvenile lockup until a hearing Tuesday to decide whether they should be released pending formal charges, according to Fred Abdalla Jr., chief probation officer for the Jefferson County Juvenile Court.

In one of the tweets, the writer appears to threaten to kill the girl at the center of the rape case. Another warns that she will be beaten.

The arrests come a day after a judge ruled two teenage boys were guilty of raping the girl by putting their fingers in her vagina while she was too intoxicated to consent during a series of end-of-summer parties last year.

That case prominently featured photographs, videos and text messages documenting portions of the abuse -- some of them posted to the Internet by teenagers in the small Ohio River town.

The tweets were apparently sent Sunday, shortly after the trial ended. Sheriff Fred Abdalla said Judge Thomas Lipps had not yet left the courthouse when authorities got word of the threatening messages.

The girl accused of tweeting the death threat turned herself in after learning that investigators were looking for her, Sheriff Abdalla said.

While formal charges have not yet been announced, he said, "there's no question they're going to prosecute."

"I hope this sends a warning," he said. "And I can assure you we've been monitoring Twitter for 24 hours and continue to. If there's anybody else there crosses a line and makes a death threat, they're going to have to face the consequences."

"If anyone makes a threat verbally or via the Internet, we will take it seriously, we will find you, and we will arrest you," he said.

Steubenville has been in a harsh spotlight since the rape accusations became national news in December.

A crime blogger and former Steubenville resident, Alexandria Goddard, uncovered some of the social media documentation of the abuse and wrote pointedly about the possibility that the teenagers had been given preferential treatment because they played on the town's highly regarded football team. Police have denied that claim.

National media picked up on the case, followed by the loosely organized hacker group Anonymous, which found and posted a lengthy video in which another teenager -- who has not been charged -- made joking references to the rape.

The ensuing ire over the case brought national attention and criticism to the city from around the country, leaving city officials struggling to defend the community and residents weary of the media spotlight.

On Monday, the victim's mother told CNN that the verdicts are "the start of a new beginning for my daughter." But she added, "We need to stress the importance of helping those in need and to stand up for what is right."

"We hope that from this something good can arise," she said. "I feel I have an opportunity to bring an awareness to others, possibly change the mentality of a youth or help a parent to have more of an awareness to where their children are and what they are doing. The adults need to take responsibility and guide these children."

While the verdicts seemed briefly to indicate the case was winding down, DeWine announced a grand jury investigation to determine if anyone else should be charged with a crime as a result of incidents surrounding the abuse.