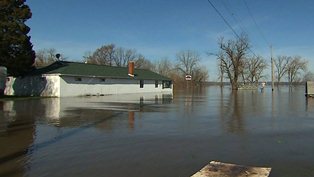 (CNN) -- Having suffered from flooding since Sunday, the last thing many in the Midwest want to hear about is rain. But at least another inch is expected Tuesday, as those hit hardest figure out what steps to take.

Deluges over the weekend left people homeless, rivers at dangerous levels and many in precarious situations.

"The more I see the water come up, the more I'll cry," said Starlynn Winchell, as she stared at floodwater rushing up against her home in Spring Bay, Illinois.

Winchell is one of many people in riverside communities this week inundated by flooding.

At least six rivers in northern Illinois surged to record levels in recent days after the area was pummeled with 5 inches of rain. Flooding has displaced thousands and pushed Illinois Gov. Pat Quinn to declare 44 counties as disaster areas.

"We have seen some of the worst flooding damage to neighborhoods and homes across our state in Illinois history," Quinn said Monday.

The Illinois River in Spring Bay was cresting, but officials predict it will take a week and a half for the area to dry up.

"The sustained periods of heavy rainfall (have) swollen creeks and streams and is pushing the Mississippi River over flood levels, endangering river communities," Nixon said.

Flooding has devastated Spring Bay, a northern Illinois town of less than 500 people.

Winchell said the flooding began Sunday, submerging her home and about 40 others in her trailer community. By Monday, the dark, murky water was still as high as the door of some homes. Winchell said she could not get back into her home as she stood about 50 yards away, where the water has receded.

"Yesterday, I cried all day," she said.

Brad Lohman, who owns a bar in the town, was also hit hard.

"It's kind of emotional to see this situation, and it's a bad deal," he said, looking at the waters that rose close to window level.

Lohman worked at the bar when he was a teenager and eventually bought it. But this flood may be the end. He doubts he can reopen.