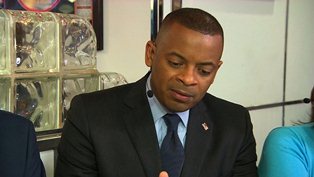 (CNN) -- If President Barack Obama still needed a reminder that diversity within his second term Cabinet was a contentious issue, he got one Saturday night.

"Mr. President, your hair is so white it can be a member of your Cabinet," jabbed Conan O'Brien at the annual correspondents' dinner in Washington, drawing laughs and some loud "ooos" from the crowd of political insiders.

On Monday, Obama will nominate Anthony Foxx to become transportation secretary, the first African-American pick for his second term cabinet. The post comes with vast oversight responsibility over the nation's roads, airports, railroads and seaways.

Announcing Foxx as Obama's pick for transportation secretary, the White House noted his achievements in opening a new runway at Charlotte/Douglas International Airport, and his championing a new streetcar system in the Queen City. He also helped lead last summer's Democratic National Convention, which drew tens of thousands to Charlotte without any major logistical hiccups.

"As mayor of one of America's most vibrant cities, Anthony Foxx knows firsthand that investing in world-class infrastructure is vital to creating good jobs and ensuring American businesses can grow and compete in the global economy," the White House official said.

But picking Foxx will also help dispel the image of Obama naming only white men to top posts in his administration. The criticism began earlier this year, when the first Cabinet picks of Obama's second term - Secretary of State John Kerry, Defense Secretary Chuck Hagel, and Treasury Secretary Jack Lew - were all white men.

After taking heat, Obama named several women to prominent roles, including Sylvia Mathews Burwell as director of his budget office and Mary Schapiro as the chief of the Securities and Exchange Commission.

But groups like the Congressional Black Caucus cried foul, saying the lack of African-American nominees amounted to a snub for his most ardent supporters.

Rep. Bennie Thompson, D-Mississippi, said in a weekly address for the CBC that Obama "has once again overlooked his most loyal constituency."

"President Obama has selected the lowest number of African American Cabinet members in 38 years, and fewer than his Republican predecessor George Bush who nominated four African Americans to his Cabinet," Thompson said on April 9.

The CBC's chairwoman, Rep. Marcia Fudge, wrote in a letter to Obama that "the people you have chosen to appoint in this new term have hardly been reflective of this country's diversity."

Obama himself disputed the notion his inner circle was lacking diversity, urging patience at a news conference in January.

"I'm very proud that in the first four years we had as diverse, if not more diverse, a White House and a Cabinet than any in history," he said on January 14. "And I intend to continue that, because it turns out that when you look for the very best people, given the incredible diversity of this country, you're going to end up with a diverse staff and a diverse team."