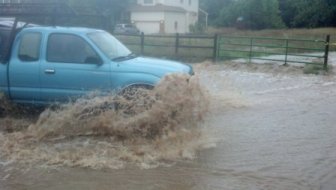 After more than a day of isolation, help has arrived for flood-besieged Lyons, Colorado.

The rescue undoubtedly comes as good news for the residents, who have been facing what Fire Chief J.J. Hoffman called a "very large disaster" -- flash flooding from more than half a foot of rain that washed out roads, damaged dams, flooded homes and left the city entirely cut off from the outside.

Not even National Guard helicopters -- grounded by poor weather -- could reach the residents.

"I encourage all of you -- stay strong!" Hoffman wrote on the fire department's Facebook page. "We will make it through this, we are here for you and doing the absolute best we can with the resources we have to get to each and every one of you!"

Lyons will follow its fellow Boulder County town of Jamestown as being totally evacuated as a result of the storm, which began around 6 p.m. Wednesday and sent virtually every waterway in the county coursing out of its banks, Boulder County Sheriff Joe Pelle said. Officials also asked residents of Eldorado Springs to leave their homes, and evacuation recommendations were up for parts of Fort Collins, Colorado, as well.

Interstate 25 between Denver and its northern neighbor, Fort Collins, was closed Friday due to flooding, the Colorado Department of Transportation said.

Overnight, flood sirens sounded in Boulder County as Colorado emergency officials feared that debris-caked canyons might give way and send another wall of water crashing through the city of Boulder and neighboring communities.

"All residents are warned to go to higher ground immediately due to the potential for flash flooding along the creek," Boulder's Office of Emergency Management said.

Emergency management warned that "there are mudslides at the mouth of Boulder Canyon 400 feet long and four feet deep as the sides of the canyon give way due to the saturation from the days-long rain."

At least three people have died and one was missing as a result of the flooding -- two of the deaths in Boulder County and the third in Colorado Springs, south of Denver.

There were dramatic rescues Thursday, including a man pulled from an overturned car in rushing water on live television. But officials have had a difficult time reaching affected areas because of the flooding, debris, mudslides and washed-out roads.

More rain was forecast for the area Friday, and the National Weather Service extended a flash flood warning "until further notice."

In Lyons, a small advance team made up of Colorado National Guard members, along with a Federal Emergency Management Agency search-and-rescue team, made their way to the town around 9 p.m. Thursday, but only with great difficulty, Hoffman said on Facebook.

The worst of the damage reported Thursday was in Boulder County, where the National Weather Service said a 20-foot wall of water roared down a mountain canyon north of the city.

One death was confirmed and another feared after a car stopped in the rushing water. Witnesses said a woman emerged from the car and was swept away. A man left the car and tried to reach her and also was overcome, Boulder County Sheriff's Cmdr. Heidi Prentup said. She said the man's body had been recovered and the woman was missing.

Bodies also were found in a collapsed home in Jamestown and on a roadway in Colorado Springs.

Elsewhere, homes collapsed onto residents and a dam in Larimer County broke, flooding some houses and trapping three people, a county spokesman said.

Larimer County Sheriff Justin Smith said some residents there face the dilemma of whether to try to move to safer shelters over bridges that may have been damaged. They will "have to use their own judgment," he said.

An emergency message from the sheriff's office to residents of Big Thompson Canyon said, "If you are cut off because of a compromised bridge, you need to stay at your residence but have a plan to get to higher ground at a moment's notice."

Another concern was a team of Lyons firefighters that had been stuck on a mountainside Thursday morning after their vehicle was washed away. As of Thursday evening, authorities in Boulder had not been able to make contact with the Lyons department to confirm the firefighters had been rescued, said Ashlee Herring, a spokeswoman for the city of Boulder.

Between 25 and 30 roads were closed Thursday afternoon in Boulder County, Prentup said. Some of them had been washed out entirely.

The extent of the damage was widespread but difficult to pin down, Pelle, the Boulder County sheriff, said Thursday.

"We've lost roads, we've lost bridges, cars, homes," he said. "And we are just now trying to assess the scope of the damage."