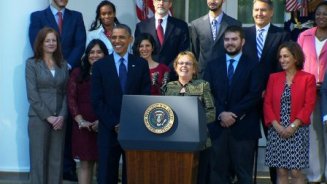 Call it the Obamacare website fiasco, with the focus Wednesday on Health and Human Services Secretary Kathleen Sebelius after she told CNN that President Barack Obama knew nothing of the problem before it became evident starting on October 1.

Sebelius heads to the White House for an afternoon meeting with insurance industry executives, then leaves town to participate with other officials in what the administration calls a "grassroots effort" to boost enrollment in Obama's signature health care reform system.

Republican opponents seeking to undermine the 2010 Affordable Care Act call for Sebelius to be fired for the website problems in the program overseen by her department.

They also want to delay the deadline for people to obtain health coverage under the law or face a fine, with one Democratic senator joining that call.

Here are the latest developments:

Signing up the uninsured

Sebelius and other Cabinet secretaries as well as White House officials will head to cities across the country to encourage uninsured people to enroll in the new system.

"We are planning to deploy White House officials and Cabinet secretaries to the 10 cities across the country with the highest rates of uninsured Americans to do enrollment events and other grassroots activities," an administration official said. "These cities and metropolitan areas include Dallas; Houston; Miami; Atlanta; Phoenix/Tucson; North Jersey; Tampa; Orlando; Detroit and San Antonio."

In the interview Tuesday with CNN's Dr. Sanjay Gupta, Sebelius said Obama didn't hear that there may be problems with the sign-up portal for new exchanges under the health care law until it went live on October 1.

The site was supposed to make it simple for people to search and sign up for new health care policies, but instead it's been clunky and, at times, inoperable.

She attributed some problems to "extremely high" volume, saying nearly 20 million people came to the Healthcare.gov website in the first three weeks after its launch.

Of those, about 500,000 created accounts on the website, far below the millions that the administration hopes to eventually sign up in the six-month open enrollment period that ends on March 31.

However, administration officials note that such sign-ups traditionally start slow as consumers shop around, with the most activity occurring in the final weeks and days before the final deadline.

Republicans said the interview showed the President didn't know what was going on with the law nicknamed for him.

"Either Secretary Sebelius is lying to protect President Obama or the President needs to get control of his signature health care law," he said.

Sebelius says she is bringing in tech experts from Silicon Valley, as well as acting Office of Management Budget Director Jeff Zients, to try to fix website problems that have included long delays, the inability to enroll and bad information relayed to insurers.

Asked why the leading experts were only getting involved now, instead of before the website launch, Sebelius said of the contractors and agencies responsible for the project: "We (had) hoped that they had their 'A-Team' on the table" from the start.

Republicans already are challenging the concept, calling it a "money surge" and seeking information from some of the outside experts about what they are supposed to do.

In letters Wednesday to five technology companies -- Verizon Enterprise Inc., Google, Microsoft, Oracle and Expedia -- House Oversight and Government Reform Committee Chairman Darrell Issa of Calfornia asked for details of what involvement, if any, they have in the surge.

"Despite the President's assertion that 'we're well into a tech surge,' neither the White House nor (the Department of Health and Human Services) is providing additional details about which private sector companies have been engaged or whether they are being engaged through the appropriate procurement processes," Issa said.

His letters asked the companies for all their communications with the agencies involved in the health care reform effort as well as with the Office of Management and Budget and Obama's executive office.

At least two committees in the GOP-led House have scheduled hearings this week and next to probe the rollout problems.

"Clearly there's problems with the website, but I would argue that the problems go much further than that," House Speaker John Boehner told reporters on Wednesday.

Officials from the contractors hired to create the website, including CGI, Serco, and Equifax, will appear on Thursday before the House Energy and Commerce Committee, with Sebelius scheduled to testify at another panel hearing next week.

Meanwhile, the House Ways and Means Committee has a hearing set for next week with the head of the Centers for Medicaid and Medicare Services, a division of the Health and Human Services department that oversees Obamacare reforms.

One question certain to come up is why the rollout wasn't postponed after warnings in pre-launch tests that the website would fail. Sebelius told CNN that further delaying health coverage for Americans who need it was not an option.

"There are people in this country who have waited for decades for affordable health coverage for themselves and their families," she said.

Meanwhile, administration officials will brief House Democrats about the health care law's implementation on Wednesday, which caused their Republican counterparts to demand their own briefing. There was no immediate word on a separate session for the GOP.

One White House official confirmed that health insurance industry leaders would meet with senior administration officials, including Sebelius, on Wednesday.

A possible topic would be extending or delaying the enrollment period due to the website problems to give people more time to sign up.

The White House and Sebelius insist that the process is improving and people are signing up, encouraging critics to let the six-month open enrollment period proceed.

In addition, White House spokesman Jay Carney hinted to reporters this week of possible relief for consumers if the problems persist, saying that people can't be fined for not having affordable health coverage next year if they were unable to obtain such coverage.

Conservative Republicans who forced the 16-day government shutdown that ended last week by linking a funding measure to demands to dismantle or defund Obamacare now want to delay the creation of market exchanges -- a key component of the reforms.

At least one Democrat, Sen. Jeanne Shaheen of New Hampshire, also is calling for an easing of the enrollment deadline.

The Obamacare exchanges create large pools of buyers to make coverage more affordable for the almost 50 million Americans without insurance.

If younger people don't sign up, rates won't increase immediately but It could cause insurers to raise them in the future or drop out of the exchanges because they cannot make the economics work.

The individual exchanges are expected to include about 15 percent of Americans, with the rest of the insured population covered by employer or other group plans.

Republicans, including House Budget Chairman Paul Ryan of Wisconsin, also call for Sebelius to lose her job over the rollout problems.

Sebelius said she works "at the pleasure of the President" and is committed to her job.

"I think my job is to get this fully implemented and to get the website working right," she told Gupta.