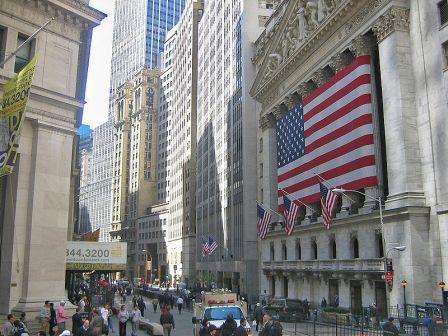 WASHINGTON (AP) — U.S. banks will be barred in most cases from trading for their own profit under a federal rule approved Tuesday.

The Federal Reserve and the Federal Deposit Insurance Corp. each unanimously voted to adopt the so-called Volcker Rule, taking a major step toward preventing extreme risk-taking on Wall Street that helped trigger the 2008 financial crisis.

Three other regulators were expected to follow suit Tuesday.

Congress instructed regulators to draft the rule under the 2010 financial overhaul law.

Senators Jeff Merkley (D-OR) and Carl Levin (D-MI), who led the reform effort, released a joint statement about the rule, saying it puts a strong firewall between banks and high-risk trading.

“The Merkley-Levin Amendment was intended to change the culture and practices at our nation’s largest financial firms, to prevent Wall Street and the big banks from making swing-for-the-fences bets that put depositors and taxpayers at risk,” the statement says.

“The regulators have taken a serious step forward in mandating critical changes.”

The rule was agreed to after three years of drafts, debates and lobbying by Wall Street banks.

The final version is stricter than many had expected and are intended to prevent risky trading that required taxpayer-funded bailouts during the crisis. But the rule still provides some exemptions.

At its heart, the rule seeks to ban banks from almost all proprietary trading. The practice of trading for their own profit has been very lucrative for big banks like JPMorgan Chase, Bank of America and Citigroup. The rule also limits banks' investments in hedge funds.

Still, the final version allows proprietary trading when it is done to facilitate buying and selling investment for customers. That is known as market-making.

Also exempted from the ban are cases when a bank underwrites a securities offering, and for trading in U.S. government, state and local bonds.

The other three agencies voting for the rule include the Securities and Exchange Commission, the Commodity Futures Trading Commission and the Treasury Department's Office of the Comptroller of the Currency.

The largest U.S. banks — those with $50 billion or more in assets— will be required to fully comply with the terms of the rule by July 2015.

Other banks will have until 2016 to comply.

The biggest banks will also be required to have compliance programs approved by their boards and senior executives. Banks will have to begin reporting on the status of those programs starting next year.

The banks' CEOs also will have to certify in writing to regulators that the banks have strong processes in place to ensure compliance.

The rule is named after Paul Volcker, a former Fed chairman who was an adviser to President Barack Obama during the financial crisis.

The rule “has the important objective of limiting excessive risk-taking by depository institutions,” current Fed Chairman Ben Bernanke said in a statement.

Big banks had reaped huge profits by taking extraordinary risks. But when those trades went bad during the crisis — especially after a wave of mortgage defaults — many of these banks were on the verge of collapsing. Most survived only because the government rescued them with taxpayer-funded bailouts.

The big Wall Street banks lobbied strenuously against the Volcker Rule. They argued that the ban could prevent them from market-making on behalf of customers or limiting risks.

Merkley and Levin say they will monitor the new rules to make sure they work as intended and bring attention to any abuses or problems.

“Hedge-fund style proprietary trading at our nation’s largest financial firms was a high-risk, conflict-ridden activity that played a central role in the 2008 financial crisis. Banks should be in the business of serving customers – including taking deposits from and making loans to ordinary families and businesses. Speculative investing should be left to hedge funds, private equity funds, and other private investors that, if they get in trouble, won’t imperil the lending so critical to our economic growth.”