Doctor Says Report on Phoenix VA Hospital is a Whitewash 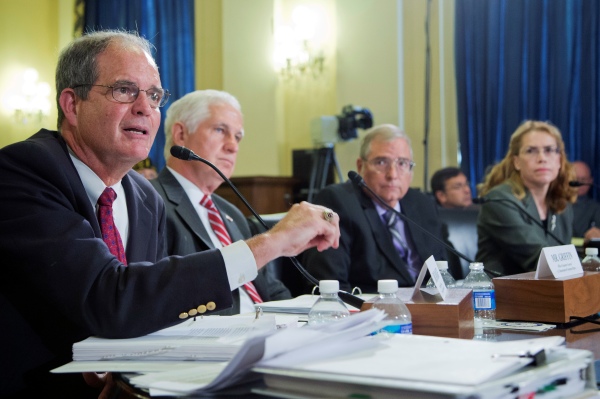 WASHINGTON (AP) — A doctor who first exposed serious problems at the troubled Phoenix Veterans Affairs hospital said Wednesday that a report on patient deaths there is a "whitewash" that minimizes life-threatening conduct by senior leaders at the hospital.

Dr. Samuel Foote, a former clinic director for the VA in Phoenix, said a report by the department's inspector general appears designed to "minimize the scandal and protect its perpetrators rather than to provide the truth."

At best, "this report is a whitewash," Foote told the House Veterans Affairs Committee. "At its worst, it is a feeble attempt at a cover-up. The report deliberately uses confusing language and math, invents new unrealistic standards of proof ... and makes misleading statements."

The Aug. 26 report said workers at a Phoenix VA hospital falsified waiting lists while their supervisors looked the other way or even directed it, resulting in chronic delays for veterans seeking care. The inspector general's office identified 40 patients who died while awaiting appointments in Phoenix, but the report said officials could not "conclusively assert" that delays in care caused the deaths.

Acting Inspector General Richard Griffin denied that the report sugarcoated any information about the Phoenix hospital or the VA, and he disputed suggestions by several Republicans that the report was altered at the request of the VA.

The sentence declaring that investigators could not "conclusively assert" that delays in care caused any patient deaths was not included in a draft report, and some lawmakers have suggested that Griffin's office added the language in an attempt to soften an explosive allegation that helped launch the scandal in the spring — that delays in care may have resulted in patient deaths.

Griffin rejected that idea out of hand.

"This sentence was inserted for clarity to summarize the results of our clinical case reviews," he said, adding that the change was by his office on its own initiative.

"Neither the language nor the concept was suggested by anyone at VA to any of my people," Griffin said.

It is common practice for an inspector general to send a copy of its findings to the agency in question to elicit an official response, which is then included in the final report. Griffin said his office has a policy of making no substantial changes to reports after allowing the VA to inspect and comment.

Rep. David Jolly, R-Fla., said language used in the report obscured the fact that delays in care likely contributed to the deaths of veterans.

"We can play with semantics all we want," Jolly told Griffin, "but right here at this table it was acknowledged that the (lengthy) wait list contributed to the deaths. That should be the headline," Jolly said.

Jolly was referring to testimony by Dr. John Daigh, assistant inspector general for health-care inspections, who said under questioning from Jolly that delays in care contributed to some patient deaths.

Daigh stopped short of saying delays "caused" the deaths, saying such a determination should be made by the judicial system.

Griffin disagreed with his subordinate, saying delays "may have contributed" to patient deaths. "I think in our report a careful reading shows they might have lived longer or could have had a better quality of life" without the delays in care, Griffin said.

Veterans Affairs Secretary Robert McDonald called the IG's report troubling and said the agency has begun working on remedies recommended by the report.

"It is clear that we failed, regardless of the fact that the report on Phoenix could not conclusively tie patient deaths to delays," said McDonald, who took office July 30.

Pressed by Jolly on whether he believes delays in care caused patient deaths, McDonald said, "What value is there in having the discussion?"

Still, McDonald told the committee he "owns" problems at the VA, including a lack of access to care and poor care for veterans. "I am committed to fixing this problem and providing timely, high-quality care that veterans have earned and deserve," he said.

Foote, who is now retired, started sending letters to the VA's Office of Inspector General last year, complaining about systematic problems with delays in care. He told investigators that up to 40 veterans may have died while awaiting treatment at the Phoenix hospital and that staff, at the instruction of administrators, kept a secret list of patients waiting for appointments to hide delays in care.

Foote later took his claims to the media and to Rep. Jeff Miller, R-Fla., chairman of the House veterans' panel, who announced the allegations at an April hearing. The resulting scandal led to the ouster of former VA Secretary Eric Shinseki and a new law overhauling the agency and granting veterans easier access to treatment outside the VA.

Three high-ranking officials at the Phoenix facility have been placed on leave while they appeal a department decision to fire them.