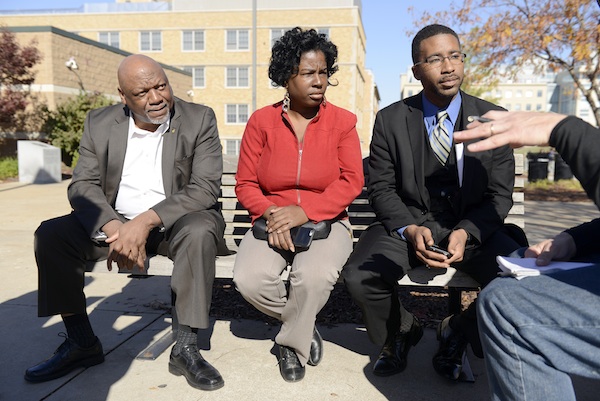 COLUMBIA, Mo. (AP) — The criticism was blunt: Blacks at the University of Missouri are harassed and threatened, the university has too few African-American faculty members, the administration doesn't seem to care, and all of that needs to change.

A list of grievances issued this month by a student group is strikingly similar to those from 1969. This time, though, it appears the university is listening.

Recent racist incidents, and the perceived lack of response by administrators, led to protests, a student hunger strike and a threatened boycott by the football team. It culminated Monday in the resignations of University of Missouri System President Tim Wolfe and Columbia campus Chancellor R. Bowen Loftin.

The interim president appointed Thursday, Michael Middleton, made it clear that he hears the concerns. Unsurprising, since Middleton, 68, was a founder of Missouri's Legion of Black Collegians who issued that set of demands 46 years ago.

"It is clear to me the first step is to devote attention to addressing those demands," Middleton said at his introductory news conference. "It is imperative to hear from all students and do everything we can to make them comfortable and safe in our community."

In fact, the university has already addressed several of the eight points on the list. Chief among them was the removal of Wolfe, but other moves have followed.

One day after the resignations, a veteran associate law school dean, Chuck Henson, who is black, was named to the new position of interim vice chancellor for inclusion, diversity and equity. The university's governing board also pledged more support for those who experience discrimination and said diversity and inclusion training will become mandatory for faculty, staff and students. On Friday, Gov. Jay Nixon named Yvonne Sparks to the Board of Curators, the second black member of the nine-person panel.

The university also hired the lobbying firm of Andy Blunt, who is Sen. Roy Blunt's son and campaign manager, to represent it in Jefferson City, agreeing to pay $10,000 per month in a contract signed Monday.

Many students are hopeful, but want to see more action.

"Really it just comes down to holding these people accountable," said Shelbey Parnell, an organizer of Concerned Student 1950, the group that issued the demands. "They're saying a lot of these things in the moment."

Many of the issues cited nearly five decades ago persist. The 1969 document cited physical threats by whites against blacks, with frequent threats made to what was then known as the Black Culture House. This week, the university's black culture center reported a threat, and its sign was spray-painted by vandals.

The 1969 list expressed concern about the "nonchalant attitude on the part of the university," saying it made it "a haven for comprehensive institutionalized racist and political repression." Those feelings were echoed by many protesters this week.

Meanwhile, the university's low percentage of black faculty and staff remains a point of contention.

The 1969 document noted that just 19 of Missouri's 1,600 faculty members (1.8 percent) were black. The percentage today is just 3.25 percent of full-time faculty. About 7 percent of staff members are black.

The 2015 demands call for increasing the percentage of black faculty and staff to 10 percent by the 2017-18 school year.

Getting there will be tough, but not impossible, said Leslie Fenwick, dean of the education school at historically black Howard University in Washington, D.C. — though she noted that few traditionally white colleges and universities have reached that level.

"I think it requires, more than anything, a will and a compulsion, an acknowledgement that something is deeply wrong in 2015," Fenwick said. "We're almost two decades into a new millennium, and the concerns these young people have harken all of us back 40 to 50 years."

The University of Missouri's student population is 7 percent black in a state that is about 12 percent African-American. Data provided by the Missouri Department of Higher Education shows that four public universities in the state have higher percentages of black students. Two of those are part of the four-campus University of Missouri System — Missouri-St. Louis (14 percent black) and Missouri-Kansas City (12 percent black). The other two are historically black universities — Harris Stowe State University in St. Louis (83 percent), and Lincoln University in Jefferson City (35 percent).

About 71 percent of white students at Missouri's Columbia campus graduate within six years, compared to about 55 percent of black students.
Fenwick said it is "very disturbing" that the Columbia campus is so lacking in diversity.

"Why do we have the circumstances where black people are paying tax dollars without sufficient access to state institutions?" she asked.
___
Associated Press reporter Summer Ballentine in Columbia contributed to this report.