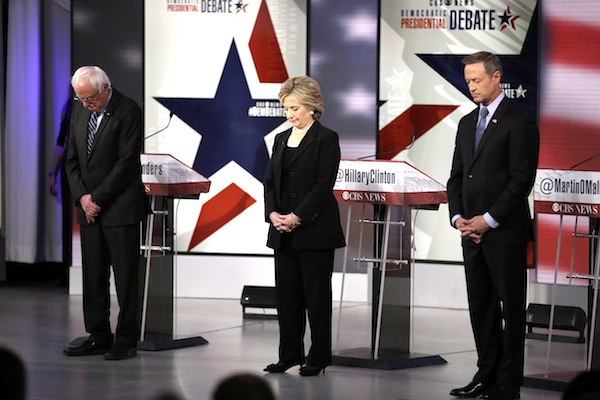 The deadly attacks in Paris cast a somber mood at the start of the second Democratic presidential debate, but the field spent the rest of the night tossing sharp elbows over Wall Street reform, gun control and the minimum wage.

Hillary Rodham Clinton, Bernie Sanders and Martin O'Malley stood for a moment of silence at the start of the debate, their heads bowed and their hands folded. From there, they engaged in a direct but measured discussion during the next 30 minutes over the consequences of the U.S. invasion of Iraq in 2003 and the rise of the Islamic State group.

But the pace of the debate quickly picked up over domestic policy with Sanders and O'Malley challenging Clinton's willingness to police Wall Street. Clinton put Sanders on the defensive over his vote to shield gun manufacturers from legal liability in fatal shootings. O'Malley accused Clinton of being on "three sides" of gun control, saying she once portrayed herself as Annie Oakley.

Some takeaways from the Des Moines debate:

PARIS ATTACKS
The three candidates offered sharp language for the Islamic State group, which has claimed responsibility for the attack in Paris that killed more than 120 people in a series of shootings and explosions.

Sanders said the U.S. needed to lead an international coalition and that the U.S. would "rid our planet of this barbarous organization." Clinton said American prayers are with the people of France but "that is not enough" and the U.S. needed the resolve to bring the world together to "root out the kind of radical, jihadist ideology" that motivates the militant group.

O'Malley pointed to his executive experience as Maryland's governor, saying the U.S. needed "new thinking" and "new leadership" to respond to threats like those posed by the Islamic State group.
___

Clinton defended the Obama administration's initial approach to the rise of the Islamic State group, including her actions as secretary of state, and blamed former Iraqi Prime Minister Nouri al-Maliki for failing to maintain stability. She cited President Barack Obama's recent remarks about containing the Islamic State militants and said it "cannot be contained, it must be defeated."

Sanders said countries in the Middle East must get more involved in the fight against IS and called the current conflict a "war for the soul of Islam."

O'Malley sought to separate himself from Clinton and the Obama administration, saying Syria, Libya and Afghanistan are "a mess" and that the United States wasn't doing enough to build stable democracies after toppling dictators. He said the U.S. needed better "human intelligence" on the ground.

"Let's not be naive about it. Why over her political career has Wall Street been the major contributor to her campaign?" Sanders said, later calling the business model of Wall Street "fraud."

Clinton replied sharply that as a senator from New York, she stood up to help the heart of the nation's financial system rebuild after the Sept. 11 terrorist attacks.She accused Sanders of using his answer to "impugn my integrity" and noted that a large percentage of her donors were women — a line that drew applause. But her decision to invoke the 9/11 attacks as a way to defend her ties to the financial markets was met with skepticism from Republicans who accused her of politicizing the issue.

It even brought a follow-up question from a Twitter user, whose query was relayed to Clinton. She responded, "Well, I'm sorry that whoever tweeted that had that impression because I worked closely with New Yorkers after 9/11 for my entire first term to rebuild." She said people who gave her donations often said, "'I don't agree with you on everything, but I like what you do, I like how you stand up, I'm going to support you.' And I think that is absolutely appropriate."

GUN CONTROL
Clinton took the upper hand against Sanders on gun control, calling his vote in favor of a 2005 measure to give gun manufacturers immunity from lawsuits a "terrible mistake." Sanders was put on the defensive and said he agreed with parts of the bill and disagreed with others and would be willing to revisit it.

O'Malley piled on, questioning Sanders' support for the liability legislation. But he also pivoted to Clinton, accusing her of shifting her positions over time.

"When you ran in 2000, you said we needed federal robust regulation, then in 2008 you were portraying yourself as Annie Oakley and saying we don't need those regulations ... and now you've come back around here," he said.

Sanders was ready with a counterpunch, noting that O'Malley's hometown of Baltimore "is not now one of the safest cities in America." O'Malley was mayor of Baltimore, which recorded its 300th homicide of the year on Saturday.