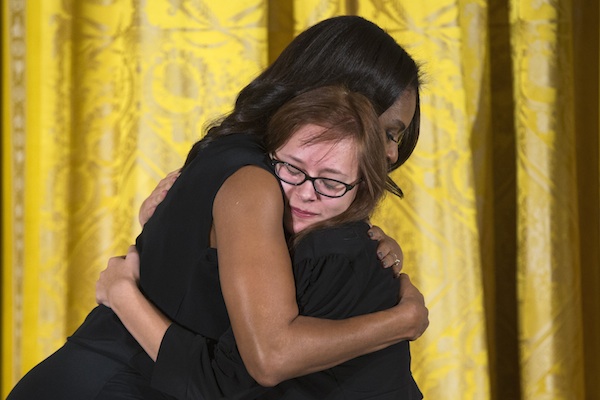 By STACY A. ANDERSON The Associated Press
Published: 21 November 2015

WASHINGTON (AP) — Calling a group of artistic youth the "next generation of fabulous," Michelle Obama presented national arts and humanities awards to 12 after-school programs from across the country and one international program from Honduras.

The first lady presented the awards Tuesday to recognize the nation's best youth programs that use arts and humanities to develop skills and increase academic achievement. She honored programs that teach ceramics, dance, music, writing, science and more. Each of the U.S. programs will receive $10,000.

The annual White House ceremony included a live performance from winning program, A Commitment to Excellence, or ACTE II. The New York group performed a song and dance medley including "I Got Rhythm," ''Girls Just Want to Have Fun," and "Empire State of Mind."

"Wow...that wasn't singing, that was 'sanging,'" Mrs. Obama quipped, referring to the group which she predicted is destined for Broadway.

"There are millions of kids like these with talent all over the place, and it's hidden and it's untapped and that's why these programs are so important," Mrs. Obama said. "We wouldn't know that all this existed without any of these programs and that would be a shame."

The 2015 National Arts and Humanities Youth Program Awards are hosted by the President's Committee on the Arts and the Humanities in partnership with three national cultural agencies.

The 13 programs recognized with a National Arts and Humanities Youth Program Award during the White House ceremony are: