Trump, Clinton Angle for Advantage in Politics of Gender 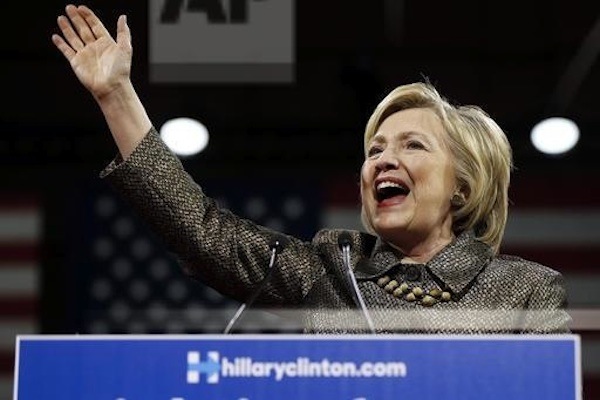 WASHINGTON (AP) — She has no stamina. She shouts. She's got nothing going for her but being a woman.

Donald Trump, after toying with gender politics off and on during the campaign, is all in on a mission to undercut Hillary Clinton's credentials by syncing up his say-anything campaign strategy with his alpha-male persona.

The same Republican presidential candidate who mocked "little" Marco Rubio, dismissed "low-energy" Jeb Bush and promises to "cherish" and "protect" women as president is dismissing the former senator, secretary of state and first lady as little more than a token female who's playing the "woman's card."

"Frankly, all I'm doing is stating the obvious," Trump insisted, when pressed about whether his latest Clinton take-downs were sexist. "Without the woman's card, Hillary would not even be a viable person to run for city council."

That message may resonate with one subset of the electorate and touch off outrage with another. But for many other voters, Trump's line of attack is simply baffling when America is trying to deal with far more complex matters of gender, such as gay marriage and transgender rights.

"It's a very simplistic notion of gender," said Debbie Walsh, director of the Center for American Women and Politics at Rutgers University. She said Trump is "putting out there a notion of masculinity" that fits with popular images of the presidency. "He is playing the gender card but not connecting it to policy, instead connecting it to his own macho image and his bravado."

Trump's messages about women represent a tangle of views, said Stanley Renshon, a political psychologist at the City University of New York.

There's the Trump who has no qualms about advancing women within his business enterprises, the Trump who disparages women just because

"I can say whatever comes to mind," and the retrograde Trump who never outgrew an adolescent fixation with desirable and beautiful women, Renshon said.

"I don't think he knows how to talk about them in a modern sensibility way," said Renshon, adding that the billionaire businessman is not used to having his utterances corrected by anyone.
Trump rival Ted Cruz says the GOP front-runner's attacks on Clinton are unsurprising.

"Donald Trump has a real problem with strong women," Cruz said. "It's one of the reasons he can't win a general election."

Trump's issues with women in the campaign extend well beyond Clinton.

He has mocked the face of onetime GOP rival Carly Fiorina, who's now Cruz's running mate. He's retweeted an unflattering image of Heidi Cruz, the Texas senator's wife, juxtaposed with a glamorous photo of his wife, Melania. He engaged in a long-running dispute with Megyn Kelly of Fox News in which he dismissed her as a "lightweight" and "bimbo," and described her at one point as having "blood coming out of her eyes, blood coming out of her wherever."

He was just as unfiltered in his thoughts about women and their appearances before entering politics. In 1996, Trump reportedly described a Miss Universe who had gained weight as "an eating machine." He described Rosie O'Donnell as "my nice fat little Rosie" in a 2006 spat. In 2012, he tweeted that Huffington Post editor Arianna Huffington was "unattractive both inside and out."

None of this has seemed to bother Trump's loyal followers in the GOP primaries. But it could be a different matter in the general election, when Republican candidates typically suffer from a gender gap. In every presidential election since 1980, a greater proportion of women than men preferred the Democratic candidate.

"The challenge for Republican candidates has been trying to make some inroads into that women's vote," Walsh said. "And it's hard to imagine that Donald Trump, as of right now, is well positioned to be the Republican candidate to make those inroads, given the things that he's said."

A woman's candidacy can cut both ways with voters.
In an Associated Press-GfK poll in February, 14 percent said a female candidate would be at least somewhat less likely to get their vote.

Likewise, 19 percent said a woman would be at least somewhat more likely to get their vote.

In the primaries, Trump has drawn a disproportionate amount of his support from men, with an average of 44 percent of men and 36 percent of women supporting him in states where exit polls were conducted.

Further, in a recent AP-GfK poll, women (66 percent) were slightly more likely than men (60 percent) to say they definitely would not vote for Trump in a general election.

Karlyn Bowman, a public opinion analyst at the American Enterprise Institute, cautioned that both Trump and Clinton "have a problem with gender in this election."

"Trump's is more serious," she added, pointing to his high unfavorable ratings with women, who make up a larger share of the electorate than do men.

The question in November, Bowman said, will be whether party loyalty will trump gender politics.

"Party is really powerful in the end," she said.

Clinton is betting on gender.

After playing down women's issues in her 2008 campaign against Barack Obama, this time Clinton is embracing the historic nature of her candidacy and playing up her roles as grandmother and longtime advocate for women. She happily addressed Trump's accusations that she was making much of her candidacy as a woman.

"If fighting for women's health care, and paid family leave, and equal pay is playing the woman card," she said, "then deal me in."

As for Trump's intemperate remarks, Clinton told CNN's "The Lead with Jake Tapper" that she "could really care less."

"I have a lot of experience dealing with men who sometimes get off the reservation in the way they behave and how they speak," she said. "I'm not going to deal with their temper tantrums or their bullying or their efforts to try to provoke me."
___
Associated Press writer Scott Bauer in Fort Wayne, Indiana, and AP News Survey Specialist Emily Swanson contributed to this report.